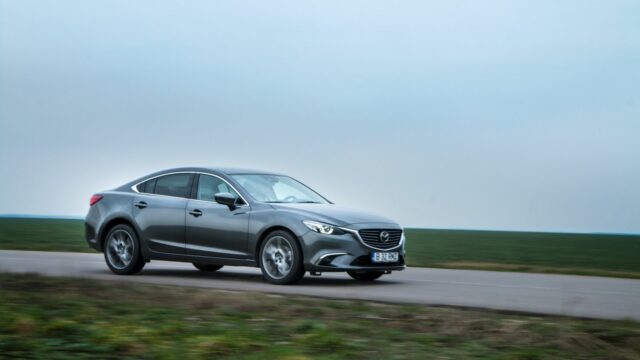 The Mazda 6 faces the chagrin of having to compete against sacred monsters – I'm looking at the Volkswagen Passat, Skoda Superb and Ford Mondeo – but it also has to outclass rising pretenders like Renault's Talisman and ambitious newcomers like the new Opel Insignia.

In helping it do that, Mazda granted its sedan with a mid-cycle facelift that should make the Mazda 6 even more up to the task. We drove the soon-to-be unicorn, old-school, 2.5-liter naturally-aspirated version and here's what we discovered.

Silent as a ghost and surprisingly civil when not stepped on the tail, the naturally-aspirated 2.5-liter petrol unit is the centerpiece of the Mazda 6 we tested.

At the same time, this is the engine you want on a driver's sedan. Sure, there's the option of more frugal petrols and diesels in Mazda's backyard, but the enthusiastic dad will display a cheeky grin once he takes this trend-defying engine into its soft-spot zone.

Anything above 3,000, 3,500 rpm will do to extract fizzles and growls out of it. Don't expect an alpha male lion sound performance, though, as this is still a four-cylinder we're talking here. Moreover, the six-speed auto gearbox will willingly help you get in the zone, slower in Normal but a tad quicker in Sport.

I'll fancy the next statement: Mazda doesn't do sluggish cars and the 6 makes no exception. Body control is excellent and although I would have liked more feedback from the light steering, its sharpness fixes the lack of communication.

Somehow, the suspension setup wriggles on the notion of compromise. It's overqualified, really. It almost kills body roll but at the same time handles bumps and potholes with minimum fuss.

However, an empty rear seat and boot will shoot some thumps inside the cabin, but nothing to disturb the Jinba Ittai zen.

There's also a trick called GVC, short for G-Vectoring Control. Mazda cheekily created a system that cuts engine torque when the car's electronic brain detects you're entering a turn (the weight shifts on the front axle, so you get more grip) and reverses the process as you exit the bend (the weight shifts on the rear axle, so you get more stability).

Overall, the handling experience is on par if not better than the Passat's or Superb's level, yet clearly trumps the heaviness of the Ford Mondeo or the indecisiveness of the Talisman.

Consider it a kind reminder delivered in subtle hints that you're driving a car built by the same brand that spawned the Mazda MX-5.

Euro NCAP put the Mazda 6 through its paces back in 2013, when the sedan earned five out of five safety stars after scoring 92% for adult occupant protection and 81% for safety assist features.

First of all, the driver sits in a low position that's successful at chasing away the high-riding posture nightmare found inside SUVs. It's a refreshing driving experience you get out of it, one that still allows good visibility all around.

Moreover, there's not much I can rule against the seat arrangement. Whether it's up front or at the back, passengers are bound to travel fatigue-free.

As the driver, the destination finds you in good energy karma even after longer trips, but keep two adults rather than three in the back seats for optimum comfort.

Secondly, the cabin is a monk in front of noise – thank the Kodo design language for that, but also the extra padding and soundproofing brought by the facelift. However, the larger wheels will torment the suspension which will, in return, notify you via loud thumping over irregular asphalt. So go small or medium, although the Mazda 6 does shine brighter on 19-inch alloys.

I also appreciated the heating steering wheel option, but I would've preferred an HUD that displays info on the windscreen rather than on the limited-size plastic screen.

Ups: they got rid of piano black and went for matte plastics instead, everything feels tightly glued together, the leather trim texture is pleasant and looks nice but go for right about any color instead of white when decorating the cabin as white – though obviously the posh choice – is also spot, stain and scratch friendly.

Downs: plastic quality is not the same around the cabin, but in the 6's defence, everyone in the industry is playing the two-faced plastic these days. Also, the gear shift lever could have been prettier and display a more premium-aiming look.

480 liters worth of cargo space won't set a new class record as they fall behind the Passat's 586 liters, Talisman's 608 liters and Superb's 625 liters.

Otherwise, you get enough room inside for smartphones, wallets, chargers, small bottles and whatnot. You just have to be more pragmatic when packing your bags for a longer journey.

The 7-inch infotainment display is an uncomplicated and straightforward piece of tech. It's easy to navigate the nicely-drawn menu pictograms via the tactile screen, but once you're on the move, that feature turns off – that would be Mazda's solution for undistracted driving – so the only option left is the rotary joystick – you know, the one looking a lot like BMW's iDrive feature.

What we got is far from that average: 9.9 l/100 km (around 23.7 mpg US), but keep in mind that there are other, more frugal engine choices in Mazda's lineup. Not as fun, though, but milder on the budget.

On the other side of the pond, Mazda USA sells the 6 for a starting price tag of $21,945 (for the Sport and Touring trim levels), but the well-equipped Gran Touring requires at least $30,695.

Regardless of your pick, the 6 remains a bold bet on Mazda's behalf, one that has all the right moves to challenge and stand up to the segment's leaders. It pays the price of beauty by compromising practicality, yet it's the spirited driving feel that acts like a soothing Band-Aid.