It can drive itself, it's more refined and luxurious than ever, and it debuts an important 2.0-liter turbodiesel engine

The E-Class is probably the model that best captures the essence of the Mercedes-Benz brand. Just think about two of its forefathers, the legendary W123 and W124 — with the latter responsible for debuting the E-Class name.

These mechanically bulletproof cars consolidated Mercedes' image as a world-leading luxury carmaker and the generations that followed continued their legacy. Okay, maybe not all of them — I'm thinking about the W210 whose rust problems and electrical glitches weren't worthy of the three-pointed star.

The latest W213 E-Class aims to set the bar even higher than its predecessors, relying on things like the upcoming family of inline six-cylinder engines (scheduled to arrive later on during its life cycle), the Drive Pilot semi-autonomous driving system, the S-Class-inspired exterior and interior design, as well as the outstanding build quality. The latest E-Class is bigger than its predecessor but lighter by up to 70 kg (154 lbs), which should make it both more fuel-efficient and more fun to drive.

To see if that's the case, we tested the model that is likely to become the bestseller of the E-Class family in Europe, the E 220 d equipped with an all-new 2.0-liter turbodiesel. Let's see what it's got. 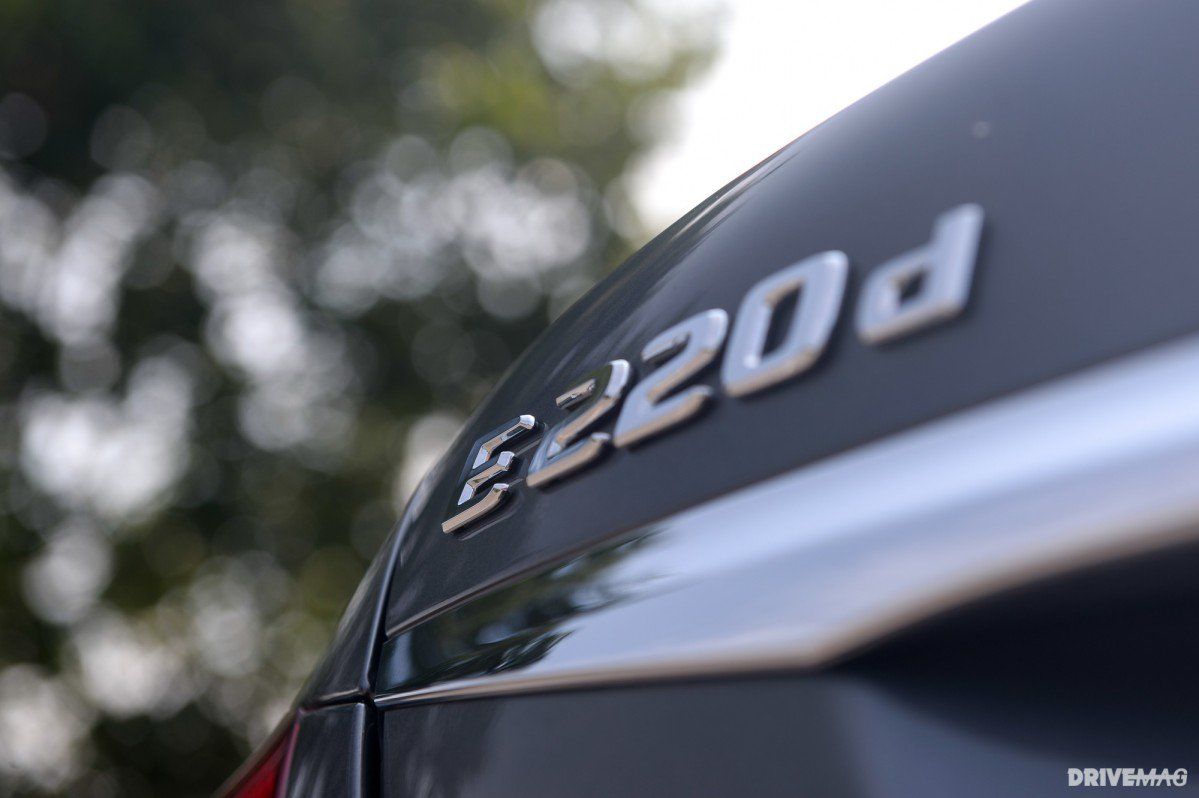 The 2017 E-Class debuts an essential engine: a 2.0-liter four-cylinder turbodiesel that replaces the previous 2.1-liter unit. With 191 hp (194 PS) and 400 Nm (295 lb-ft) of torque available from 1,600 rpm to 2,800 rpm, it moves the big sedan with ease, helped by the excellent 9G-Tronic nine-speed automatic transmission that sends power to the rear wheels.

Almost impossible to catch on the wrong gear, the gearbox squeezes swift acceleration and good fuel economy from the refined 2.0-liter diesel. The engine pulls well from low revs and allows the E 220 d to go from 0 to 100 km/h (0-62 mph) in 7.3 seconds and reach a top speed of 240 km/h (149 mph). 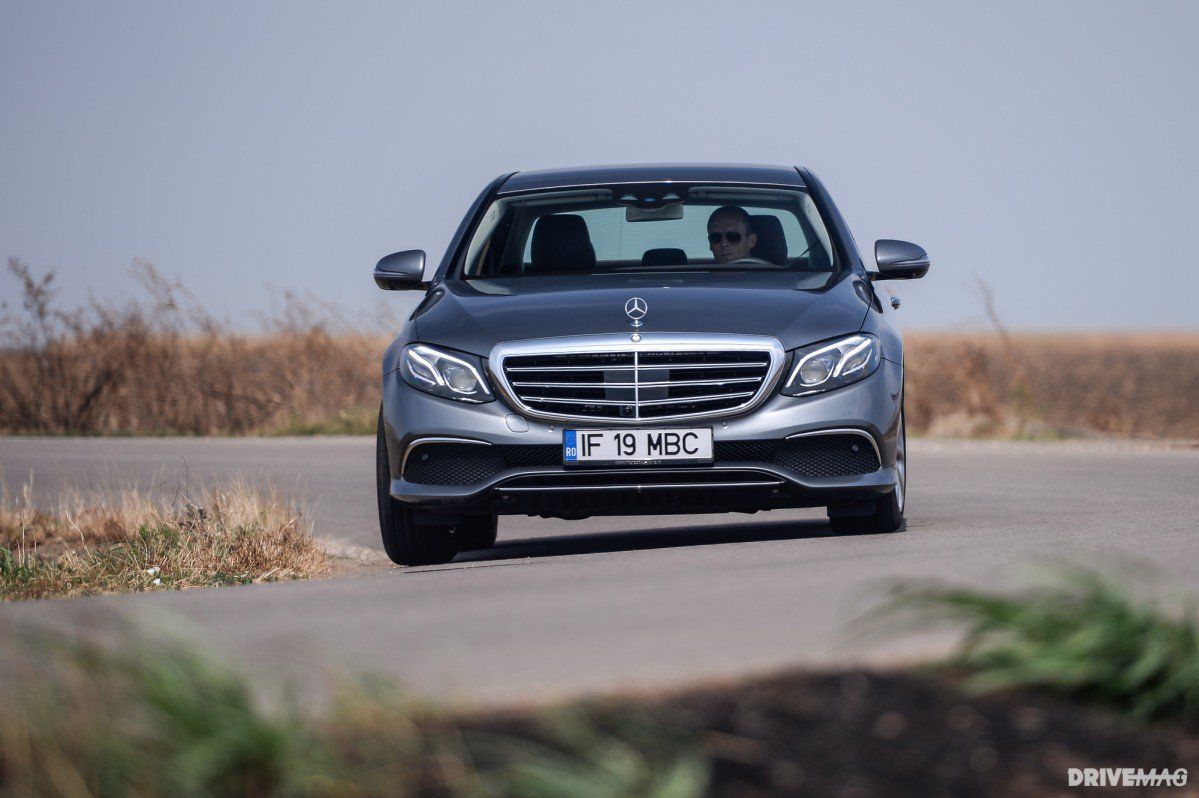 Our car came with the optional Air Body Control air suspension, which offers a sweet balance between comfort and handling. In Sport+ mode, the E-Class feels focused in corners, but you can tell the big sedan doesn't particularly enjoy going fast on twisty roads.

There's nothing inherently wrong with the way the E-Class drives, but it's not as sharp and involving as the BMW 5 Series. The Bavarian rival isn't as comfortable as the E-Class either, so in the end, it all depends on what you want from an executive sedan. If comfort and refinement are priorities, the E-Class is your choice. 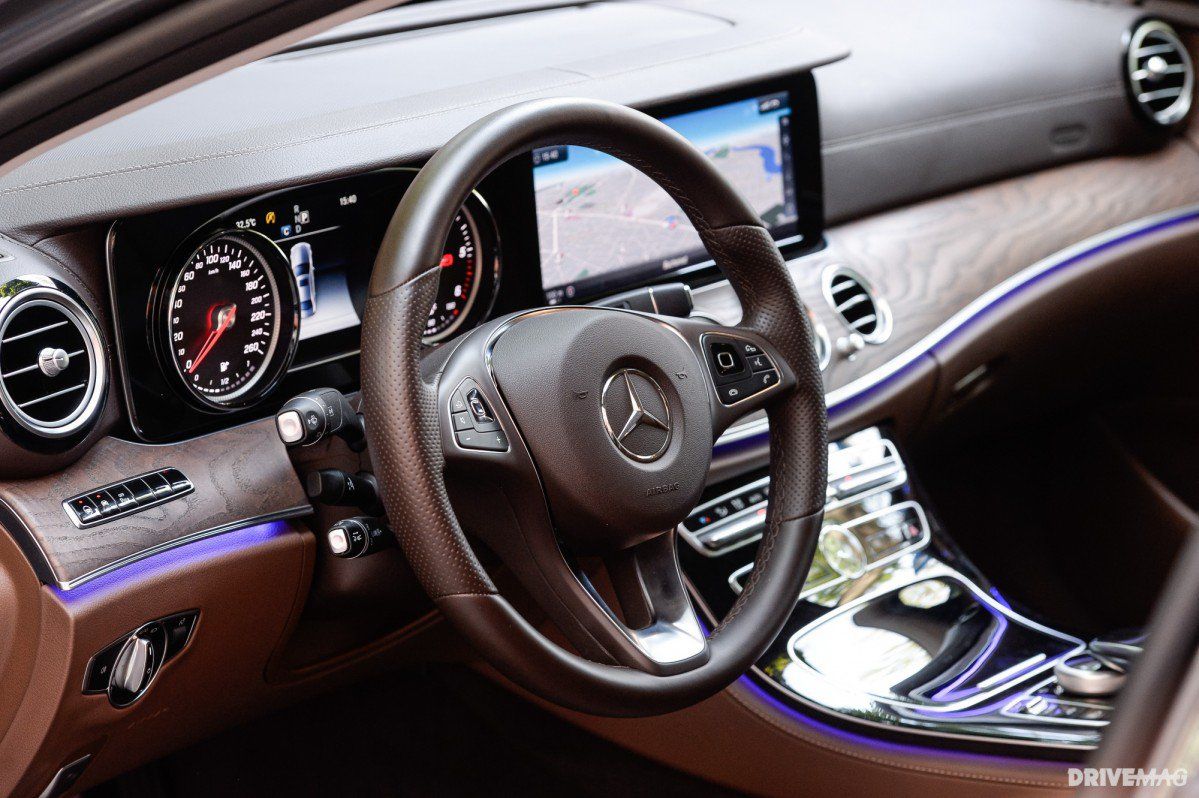 The 2017 E-Class has been given a maximum five-star rating by EuroNCAP. Following crash tests, the E-Class was deemed to offer 95-percent protection for adult occupants, 90 percent for child passengers, 77 percent for pedestrians, and 62 percent for safety assist systems. The model hasn't been assessed yet for crashworthiness in the U.S. but when it is, results should be similar.

The highlight of the new E-Class is the optional Drive Pilot semi-autonomous driving system, which can take over driving duties on the motorway. I was astonished to see the car keeping the lane, accelerating, braking and steering all by itself, rendering me almost useless in the process. It can even switch lanes — all the driver has to do is keep the turn signal on for more than 2 seconds. Oh, and it can park itself too. 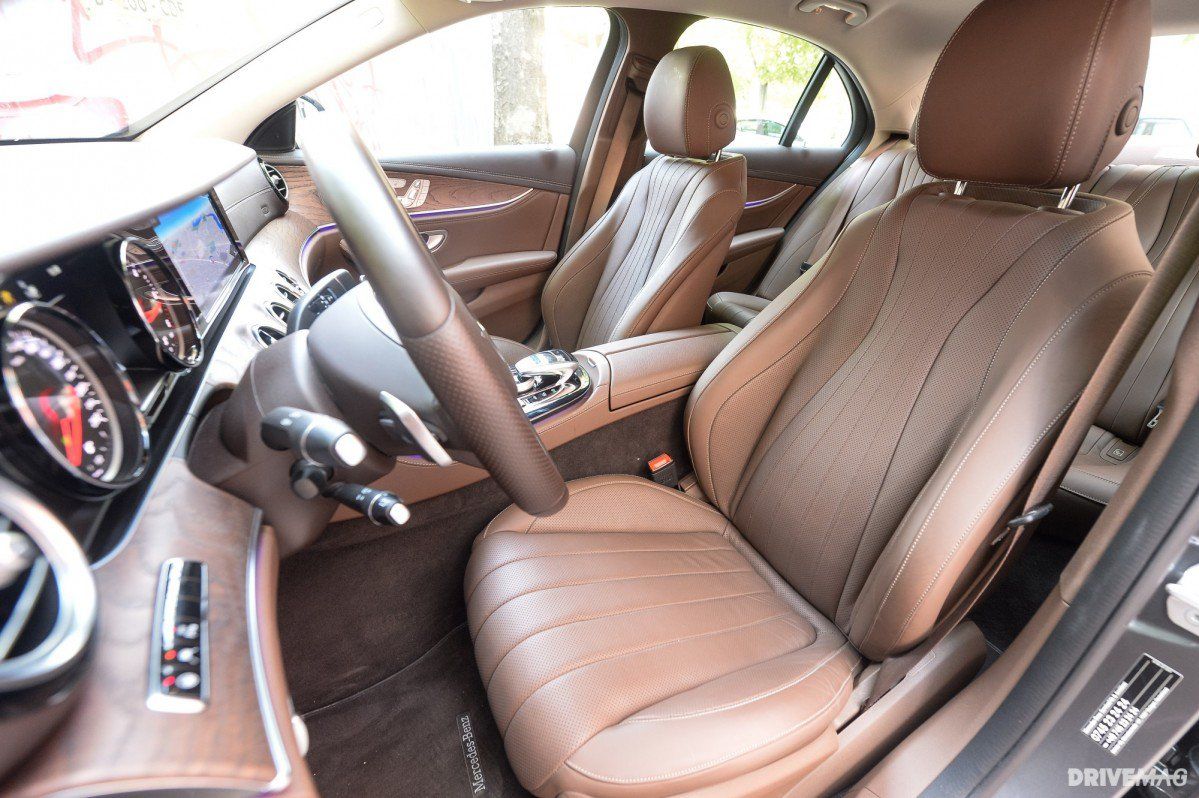 Climbing inside the E-Class is like reaching a cozy haven that lets us forget about the noisy, chaotic world we live in. The cabin is remarkably silent, with very little wind, tire, and engine noise disturbing the peace. The seats are refreshingly comfortable on long trips, and the ride is as cushy as one can expect from an air suspension.

This car is meant to be driven in Comfort mode, with the suspension at its softest and the transmission shifting gears early for a smooth and silent experience. It's hard to think of a more refined and relaxed way to travel this side of an S-Class. Another thing that reminds of the S-Class is the exquisite interior quality — at least in the generously-specced model I drove. The cabin is a cocoon of luxury and good taste, combining soft leather upholstery, classy wood and brushed aluminum trim. Even the dash is wrapped in leather!

Everything you touch feels upscale, and it is hard to find anything wrong inside. However, I did find two things: the piano black trim on the center console that's very prone to scratching and the unnerving rattle coming from the top of the instrument panel when going over rougher surfaces. It may be an isolated thing, but it's not something I expected to find in an E-Class. 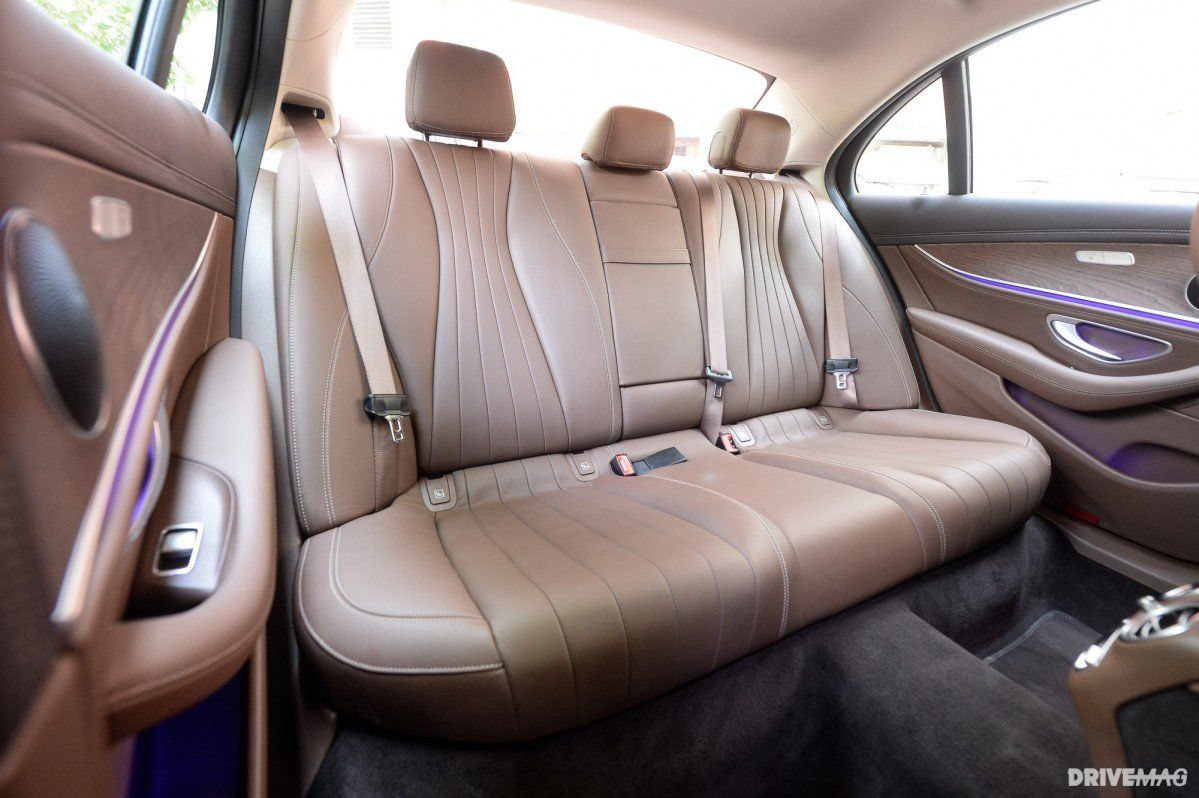 There are just enough storage spaces, with the biggest one found below the armrest. A split-folding rear seat is only optional, though. Visibility is generous, and models featuring the three-pointed star on the bonnet are easier to place on the road in turns. It doesn't get more Mercedes-like than this. The optional COMAND Online infotainment system featured on the E 220 d is too sophisticated, meaning that sometimes you will get lost in the menus and feel frustrated. But the good news is Mercedes-Benz offers shortcut buttons for the essential functions of the car.

A crisp 12.3-inch central display provides all the information you need, while a smaller 7-inch display located between the dials shows basic driving information. Mercedes continues to resist fitting touch screens to its cars for safety reasons, but the E-Class debuts touchpads on the steering wheel which are easy to use and intuitive. 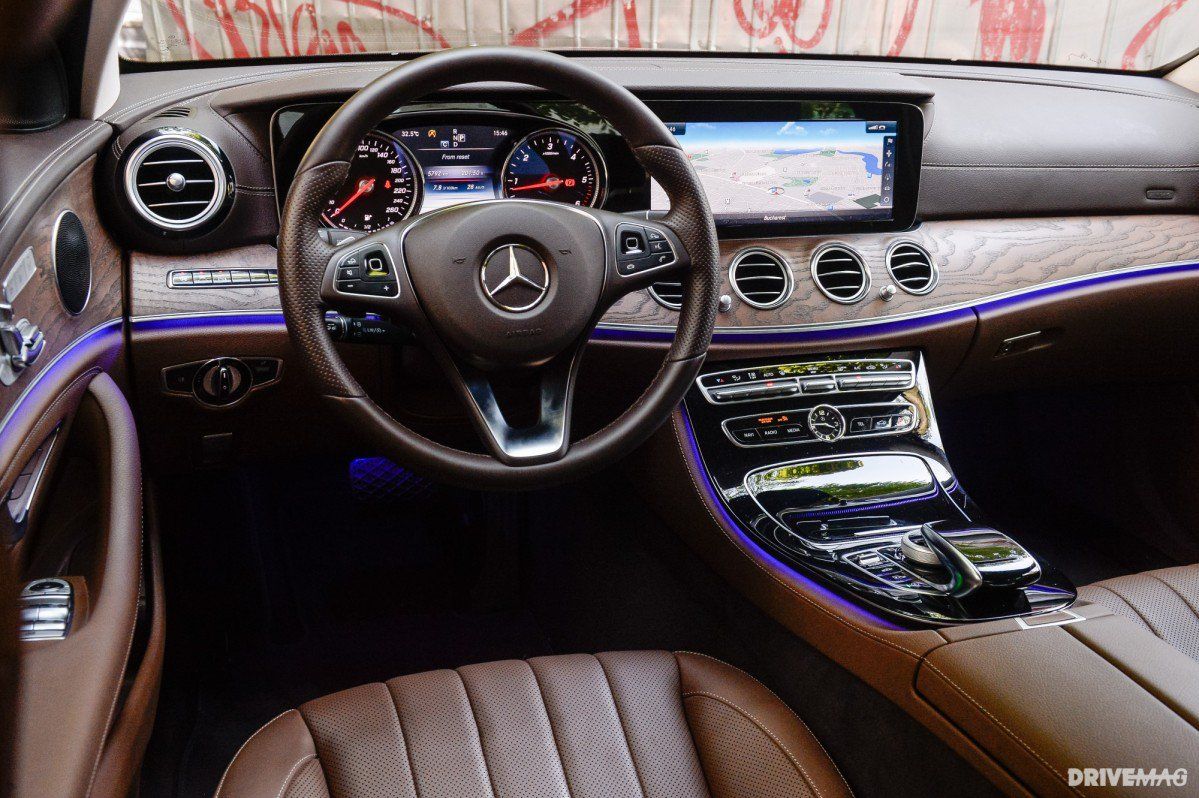 It would be easier to list the features the E 220 d lacked than those it offered. That's because the Merc packed optional extras worth €22,000 ($24,750), leaving nothing to be desired — at least as far as I'm concerned. 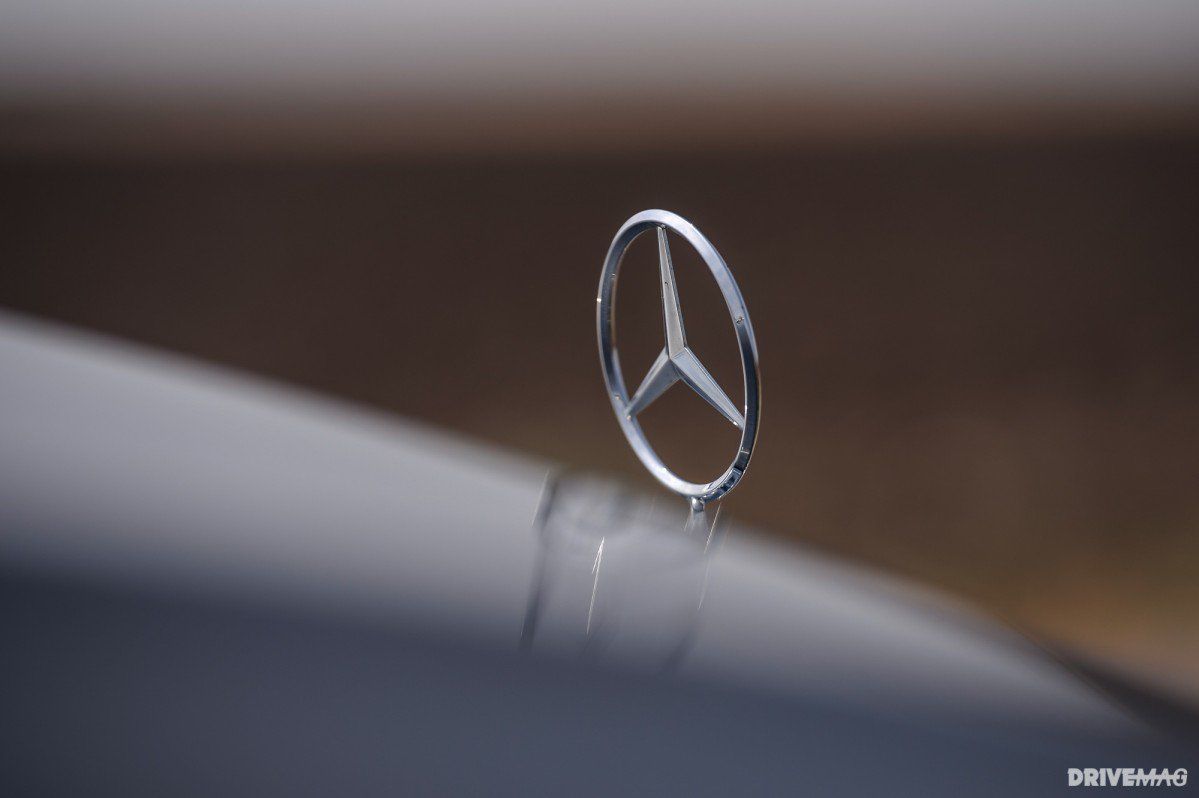 While Mercedes-Benz buyers are used to paying a premium compared to similar models from Munchen or Ingolstadt, serious money is needed to configure an E-Class like the one we tested. However, what you get in the end is essentially an S-Class for a hefty discount. And that makes the E-Class the best car in the segment at the moment.