Peugeot's range-topping, seven-seat SUV is different from the competition, and that's mostly good

SUVs are the hottest thing in the market right now, and it's not easy for automakers to come up with an original product, regardless of the segment they're targeting.

Fortunately, Peugeot has managed just that with the 3008 and 5008 crossovers it unveiled in 2016. Underpinned by PSA Groupe's modern EMP2 modular platform, the models are different sides of the same coin. The 3008 is a stylish five-seater, while the 5008 is a roomier model that offers the option of seven seats and a more generous cargo volume.

You may disagree, but I find both cars attractive and original — the 3008 slightly more thanks to its sportier stance. So when I learned I was going to review the 5008 in range-topping GT trim, I was quite excited.

The last time I remember being excited at the prospect of driving a Peugeot was when I first got behind the wheel of my hill climb-spec 205 GTi, so that was a good sign. Of course, the GT in 5008 has nothing to do with the GTi in 205. Still, it designates the model with the most powerful engine and the best equipment, so I'll take it, thanks.

Before I start dissecting the 5008 GT, however, I need to address the elephant in the room. No, not the 5008 itself (it's 4,641-mm long, after all), but the fact that it doesn't offer all-wheel drive — not even as an option. That certainly limits its appeal to buyers who just need their crossover to look rugged and not necessarily be like that. Fortunately for Peugeot, that's just what most buyers look for in an SUV: a raised driving position, the feeling of safety, sturdy looks, and practicality.

Sure, the 5008 GT won't go too far off the beaten track, but doesn't that apply to most crossovers and SUVs nowadays? The top-of-the-line GT trim level grants access to the 2.0-liter BlueHDi 180 engine, which delivers 180 hp at 3,750 rpm and a healthy 400 Nm (295 lb-ft) of torque from 2,000 rpm. Linked to a competent EAT6 six-speed automatic transmission the engine is vigorous and does a decent job of moving the 5008 GT around, whether you're doing high-speed motorway runs or attempting to overtake. That's where the lack of AWD pays off, as the crossover tips the scales at just 1,565 kg.

The EAT6 is the type of automatic transmission you don't notice, and that's a good thing because its gear shifts are smooth and well-calculated. For added drama, there's a Sport mode in which the transmission shifts gears at higher rpm, the steering gets a bit meatier, and the engine makes more noise than in the default setting. Don't bother, though — the last thing you want to hear is the noise of an oil-burner at 4,000 rpm. Don't get me wrong, the 2.0 BlueHDi 180 engine is refined (there are no vibrations felt onboard whatsoever), but it doesn't make the most pleasant noise when revved hard. 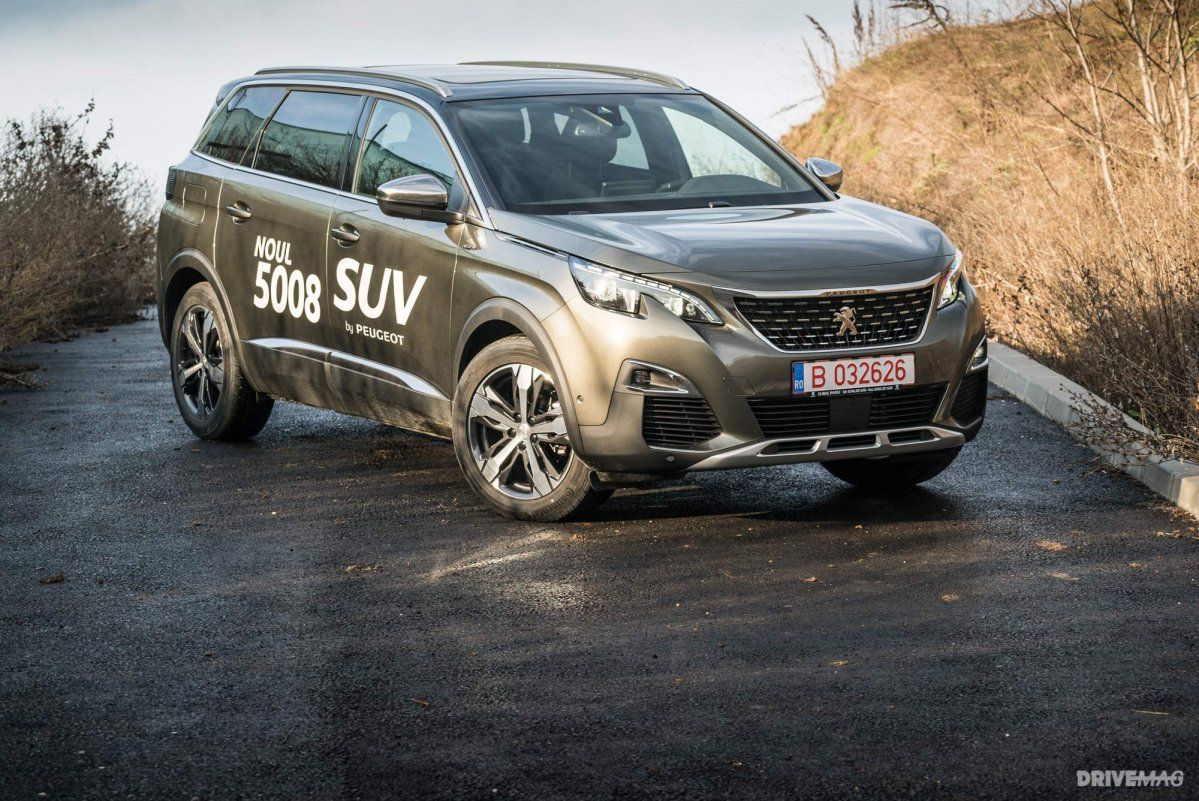 Despite its sporty-sounding name, the 5008 GT does not feel quite at ease when pushed hard on a twisty road. The suspension is set up for comfort first and foremost, and you realize that when you carry too much speed into a corner: there's plenty of body roll and you don't get that much feedback from the steering either — although the Sport mode firms it up a bit.

Still, the big Peugeot is predictable and safe at the limit, with the tire squealing and chronic understeer being clear hints for the driver to back off the throttle. A sporty SUV this is not, but for a typical driver who buys a 5008 GT to carry around his or her (many) family members, it does offer adequate performance.

As for the occasional off-road outing, the lack of AWD doesn't mean you'll get stuck right after leaving the tarmac, especially if you spec the optional Grip Control system. I took the 5008 to some low-difficulty dirt and mud roads and I felt just like in any other SUV. In Mud mode (there are also Normal, Snow, Sand, and ESP Off modes), the French SUV didn't spin any of its front wheels when going through the liquefied dirt. As long as you don't mistake the 5008 for a Jeep Wrangler, you'll be fine. Euro NCAP has assessed the all-new 3008 in September 2016 and has given it a maximum five-star rating. The organization says the same score applies to the 5008 as well, as the seven-seat SUV is structurally identical with the 3008. According to Euro NCAP's crash tests, the 3008/5008 is rated at 86 percent for adult occupant protection, 85 percent for child occupant, 67 percent for pedestrians, and 58 percent for safety assists systems.

There were no structural safety issues, but the relatively low safety assist rating was due to the lack of an active bonnet and the fact that AEB Pedestrian, AEB City, and AEB Inter-Urban emergency braking systems are not standard on every trim level. Besides the basic safety kit, our 5008 GT featured automatic emergency braking, lane departure warning with intervention, and blind spot assist. 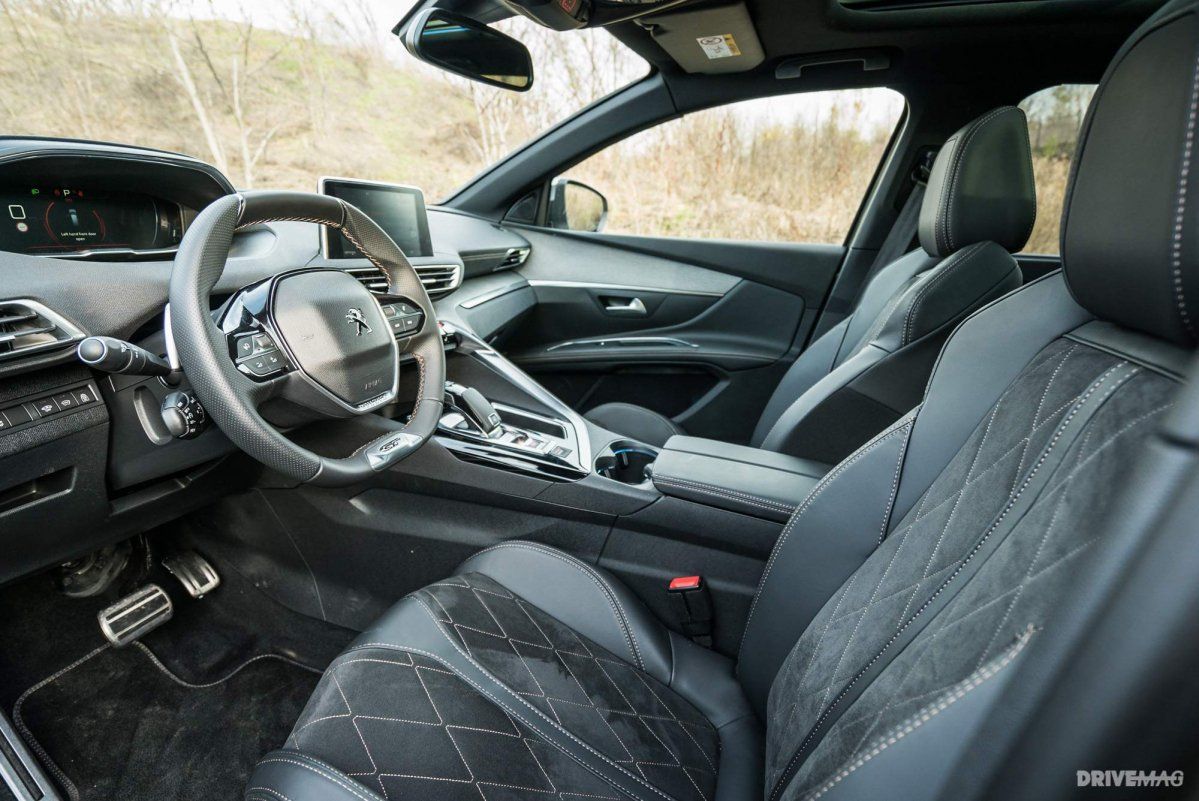 The 5008 GT is a comfortable cruiser on well-paved surfaces, but ride quality becomes crashy when cracks and potholes begin to appear. As with the 508 sedan, Peugeot still doesn't seem to have nailed the right suspension setup for roads that are less than adequate. It's frustrating because a comfortable ride is a top priority for someone who wants to buy an SUV. It's certainly a suspension problem because the car we drove rode on optional 18-inch alloys shod with 225/55 R17 M+S tires, offered as part of a pack that also includes Grip Control, hill descent, and temporary spare wheel. I don't even want to know what the ride is with the standard 19-inch rims.

That's the only thing that lets down the 5008 GT comfort-wise. The seats are comfortable, the driving position is good, and the cabin is silent most of the time. At motorway speeds, the side mirrors are the largest noise source. Something that may prove inconvenient for some users is the integration of the climate control system into the central display: you can't adjust the temperature or turn on A/C without touching the screen. Peugeot has made significant progress quality-wise, and the interior of the 5008 GT proves it. There are no rattles inside, even when going over poor-quality roads, and the materials used are on par or even better than what you can find on competitor models.

I particularly liked the leather and Alcantara MI-TEP upholstery, the oak wood and polished aluminum trim on the dash and doors, as well as the soft plastics used on the upper part of the dashboard. Most importantly, the fit and finish feel right. On the downside, the scratchy hard plastics used in the lower half of the cabin look cheap. 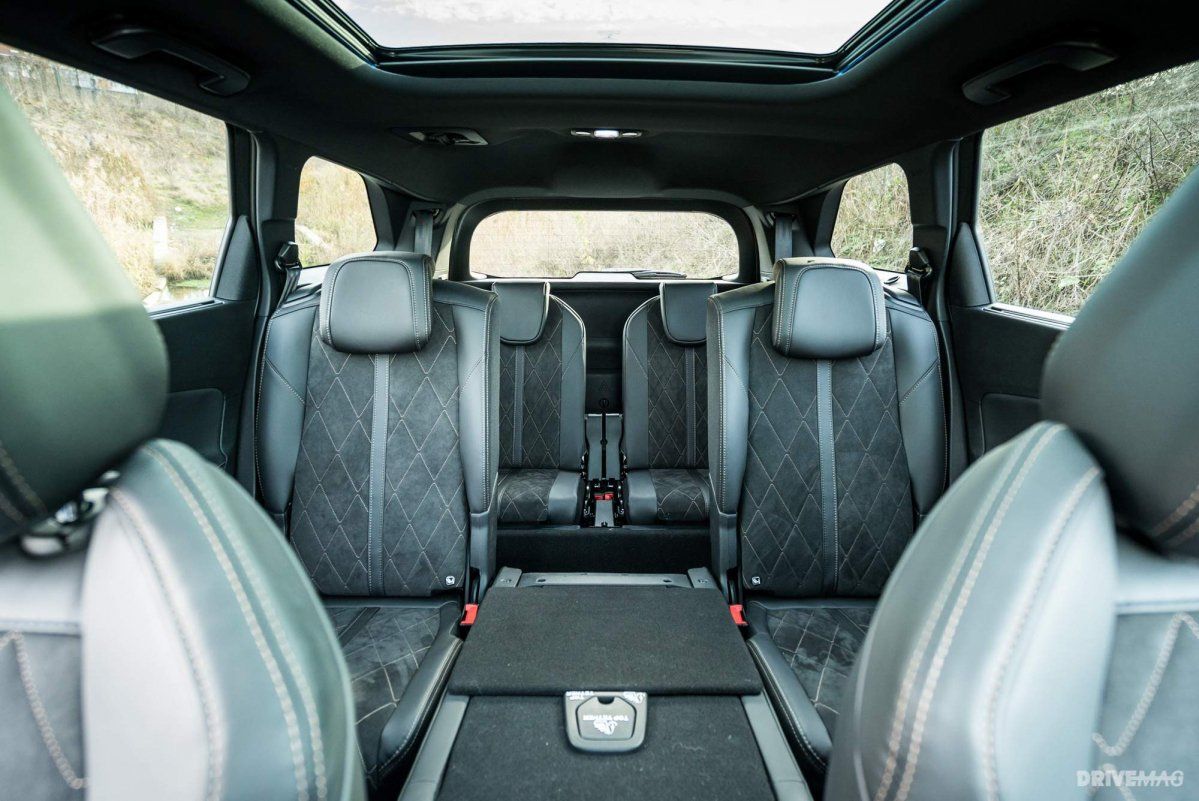 The 5008 scores big in this department because of its spacious cabin, huge cargo volume, and optional third-row seats. The lack of an AWD system results in a flat floor, which means three adults can travel in comfort on the second-row seats. Legroom and knee-room are generous, but the stadium seating and, most of all, the optional panoramic sunroof affect headroom: I'm six-foot tall (1.83 m), and my head grazed the ceiling. You need to decide what you need more: headroom in the back for taller passengers or an airy cabin.

As for the third-row (removable) seats, they're best suited for children. Still, the fore-and-aft adjustment allows adults to squeeze in for (hopefully) short trips. Cargo volume is enormous: 1,060 liters in five-seat configuration and 2,150 liters with the second-row seats folded down. And if you want to go full cargo van on the 5008, the front passenger seat folds as well to allow the transport of items up to 3.20 meters long. 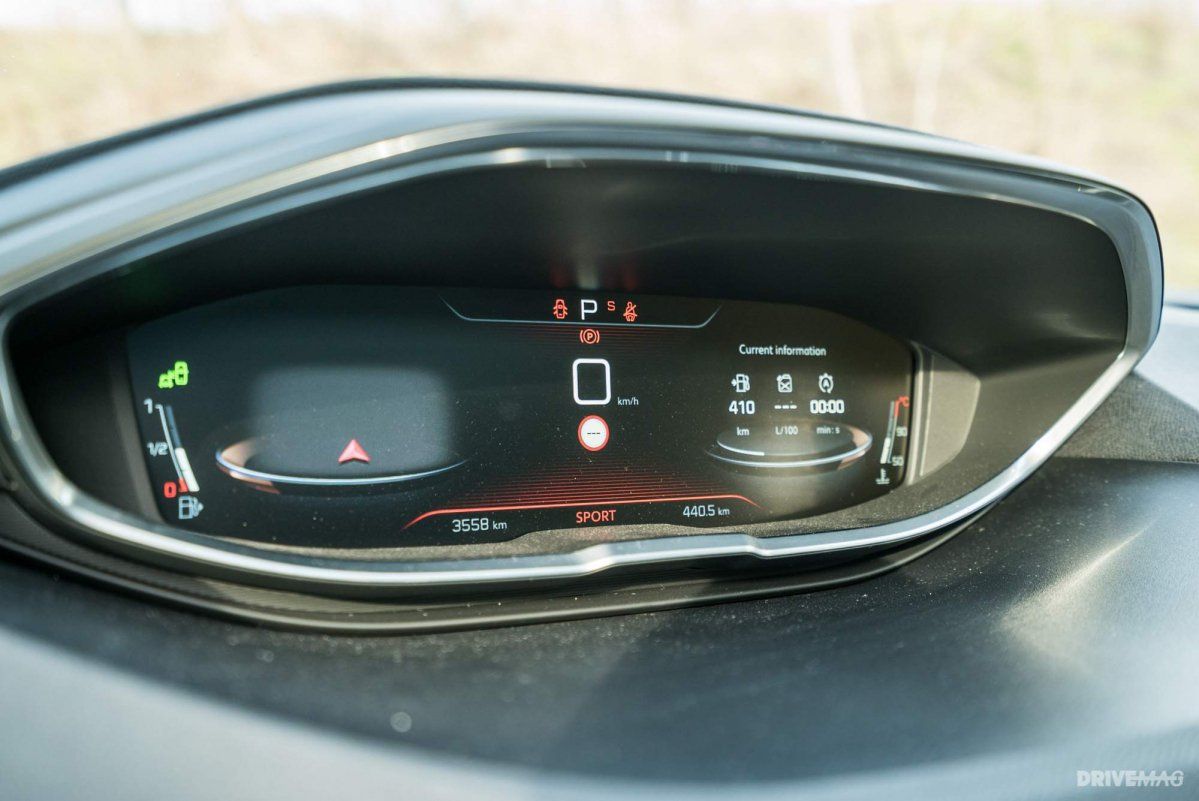 The Peugeot i-Cockpit is a really cool infotainment system, despite some quirky features such as the tiny steering wheel with flat top and bottom. It may take a while to get used to this arrangement, but once that happens you understand the thinking behind it. The steering wheel is small so that it doesn't obstruct your view to the 12.3-inch digital instrument panel, which is a neat touch. Still, taller drivers may end up holding the steering wheel in their lap if they want an unobstructed view of the instrument panel because the seat doesn't go low enough.

Both the digital display in front of the driver and the 8-inch touchscreen atop the center console feature crisp and customizable graphics. Operating speed is good, but the structure of the menu is a bit unintuitive — for example, there's no home screen and accessing some functions can take too many steps. Pairing your smartphone with the system is easy, though. With the 2.0-liter BlueHDi only having to drive the front wheels, the Peugeot 5008 GT is one of the most fuel-efficient SUVs in its class. Having covered around 500 kilometers with it (two-thirds of which on the open road, one third in the city), the trip computer showed an average fuel consumption of just 6.7 liters/100 km — far from the advertised 4.8 l/100 km but lower than what you'd expect from an SUV of this size.

Credit for that goes to the engine and EAT6 six-speed automatic transmission, but also the low curb weight of around 1.6 tonnes — less than many of its rivals. Recently, Peugeot has started rolling out the EAT8 eight-speed automatic gearbox on the 5008 GT, and the new transmission should have a further positive impact on fuel efficiency. 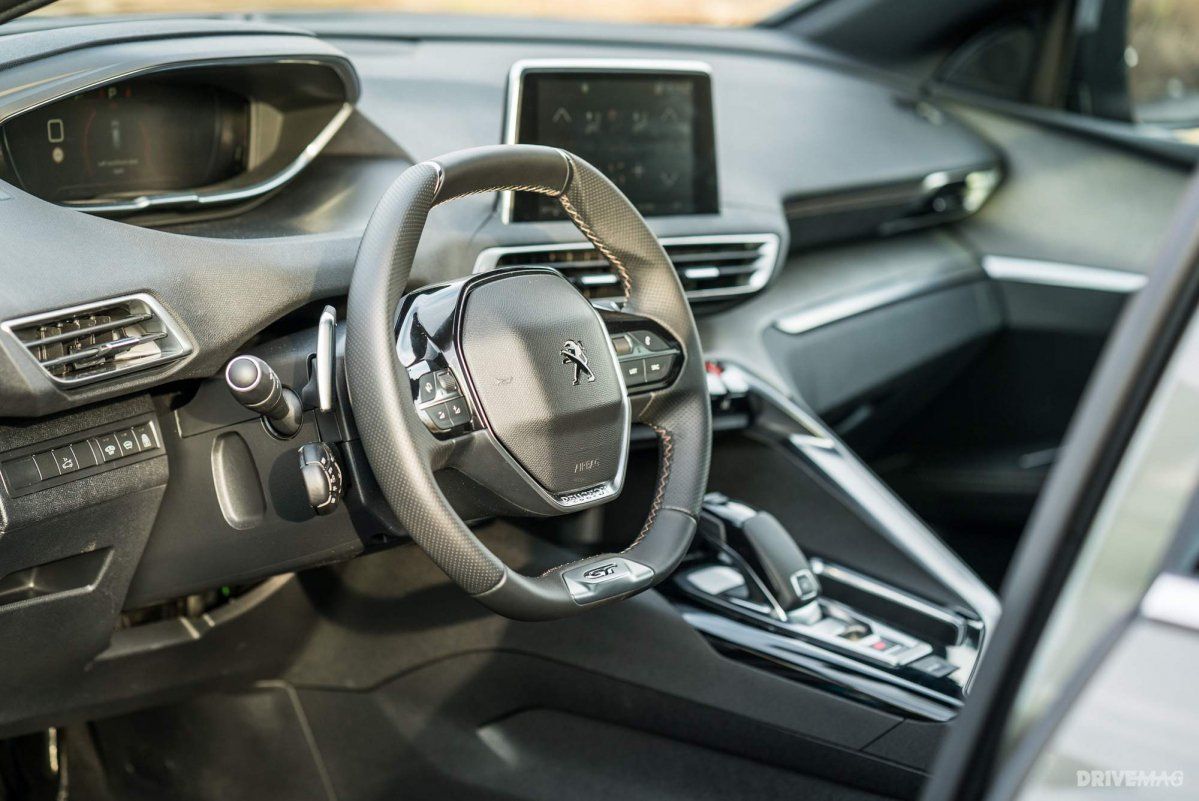 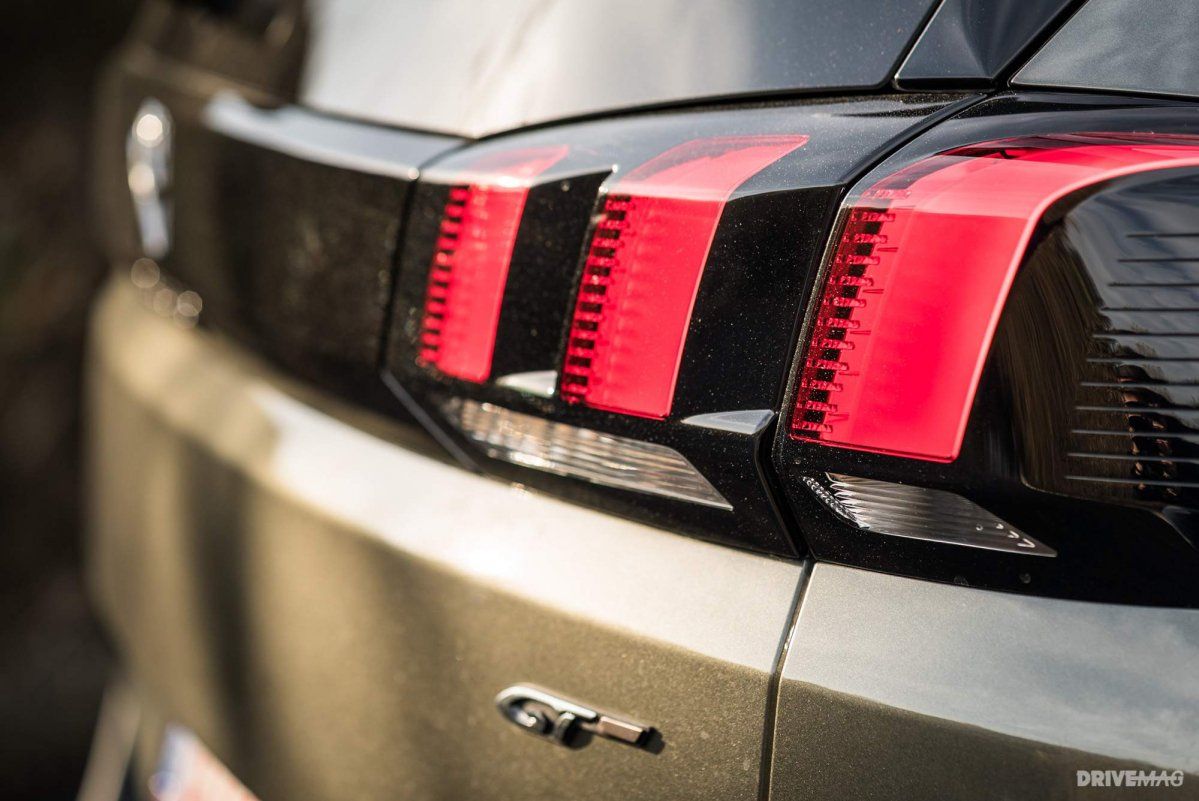 The Peugeot 5008 GT starts at €42,100 in Germany, but the good news is you don't have to spend a fortune on optional extras. The range-topping 5008 comes equipped with almost everything a typical user may need. Two optional extras are essential: the Grip Control package and the seven-seat option — the latter for buyers with big families.

You can do without a GT model, of course, as the base 5008 Access starts at €24,900. However, it only comes with the 1.2-liter PureTech 130 gasoline engine, a six-speed manual, and much fewer standard features. Regardless of the trim level you go for, you'll find that the Peugeot 5008 is a hugely practical SUV that will carry you and your family around in style, as long as you don't live in a secluded place only accessible with a 4x4.