New Velar takes the Range Rover lineup to posher heights, so we must ask: how apt is it on the road?

You could argue that Jaguar Land Rover is no longer a British automaker given its positioning under Tata Motors’ umbrella, but you’d be wrong. Regardless of corporate affairs, JLR hasn’t lost its ability to produce character-oozing models that distinguish themselves from ze Germans, probably their biggest rivals in the SUV segment.

Backing up what you’ve just read is the all-new 2017 Range Rover Velar, the fourth member of the Ranger Rover family and in our book, the poshest one to date. We’ll delve into the finer things right away, but first, here’s a list of essential things to know about the new 2017 Velar.

On paper, it’s supposed to challenge the likes of Porsche Macan, Alfa Romeo Stelvio, Mercedes-Benz GLE and Maserati Levante just to name a few. Within the Range Rover lineup, the Velar aims to bridge the gap between the Evoque and the Range Rover Sport. Signing the stunning design is Gerry McGovern, the man who’s also behind the Ranger Rover Sport and Discovery 4.

It’s also named after a 1969 concept and retains the Jaguar F-Pace’s aluminum architecture. The SUV’s design and engineering took place at JLR’s development centers in the UK with assembly being carried out exclusively at the company’s Solihull plant, which will deliver it to 170 markets around the world – a choosy crowd, is it not?

We drove the king-of-the-heap Range Rover Velar First Edition HSE featuring a 3-liter diesel V6, four-corner air suspension and almost everything there’s to offer by the house of JLR in terms of infotainment, comfort features and off-roading gimmicks.

Moreover, we won’t go deeper on the design topic simply because the photo gallery speaks best. But does it move as good as it looks? Here’s the conclusion we drew after driving the new Range Rover Velar SUV. The 3-liter V6 diesel engine is more refined than an English butler and although it packs 300 PS (roughly 297 hp) and 700 Nm of torque at 4,000 rpm, it is one of the most refined, silent and docile oil burners out there – docile, however, should not be mistaken for weak or lazy.

It’s just that it won’t charge forward like a rhino – see the diesel engine inside the BMX X4 35d for further references on that – but rather do its best to take you wherever you please, hassle-free.

The V6 diesel is also what you’d call a thirsty engine but given its application and the Velar’s 1,959 kilos, a slightly raised fuel consumption is nothing out of the ordinary.

Thank also the subtle eight-speed automatic transmission from ZF for the engine’s best behavior, although the same laidback personality of the powerplant-gearbox duo places the new Velar on the comfortable side of the fence as far as mid-sized premium SUVs go, despite the advertised sportiness. Don’t get your (sporty) hopes up because the Velar is not an asphalt abuser nor a steady hand in corners. However, you can’t hold that against it because although quite numb, the steering is accurately letting you know where the front wheels are heading.

And although the aluminum platform does pull its weight decently, the Velar’s strongest argument is the plush ride. Sure, the air suspension takes the credits especially during long highway trips where you’ll appreciate its magic carpet ways but should you push the Velar hard, all that’s going to come out is either body roll or pitch, even with the Sport mode turned on – which, in all fairness, changes the Velar’s dynamic behavior quite visibly. 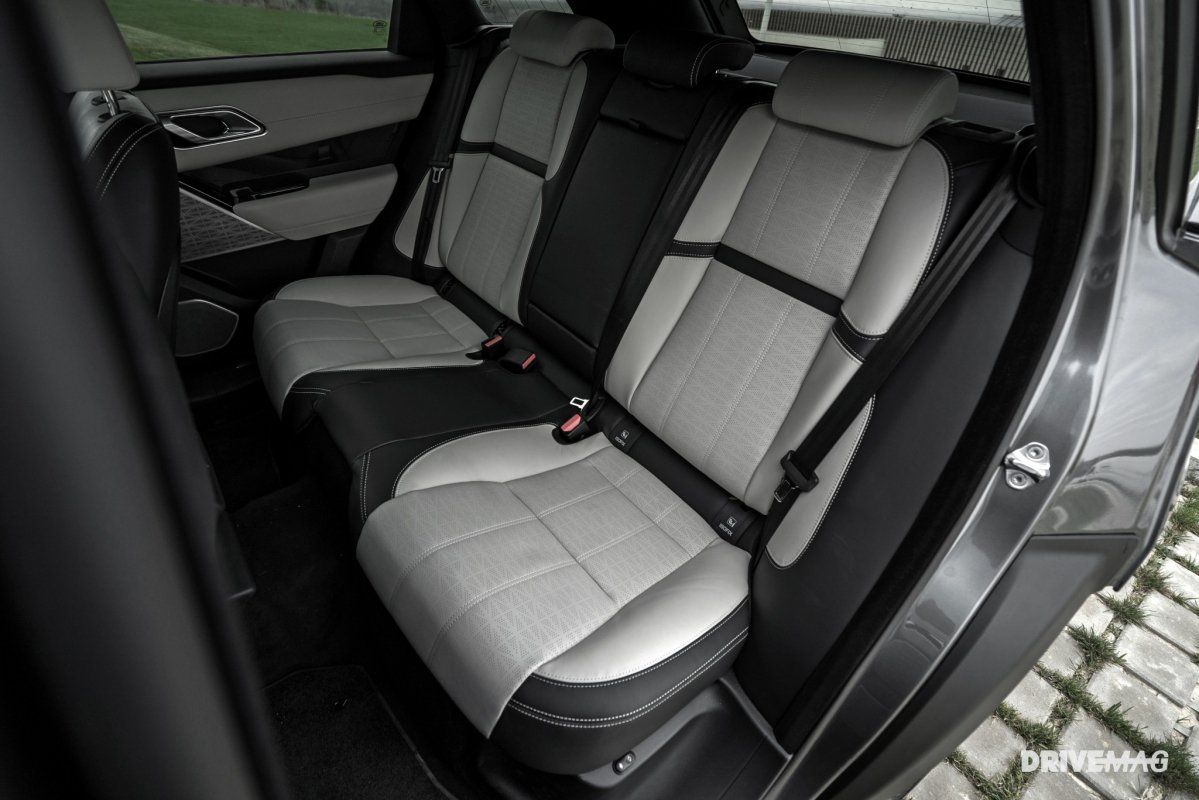 Five stars were awarded to the Ranger Rover Velar by Euro NCAP and the performance during crash tests is backed up by a handful of safety features – varying from lane keeping assist to adaptive cruise control and the lot.

On the road, the Velar generally feels safe unless you mix tight bends with enthusiastic speeds. Every model offers six airbags and the standard all-wheel drive setup manages to squeeze grip out of every inch of asphalt, wet or dry. The Velar can handle the less-beaten path equally well, but I simply think that sort of situation doesn’t necessarily suit this particular SUV.

Also, why would you risk destroying a set of fancy twenty-some-inch alloy wheels with a car that looks better in front of the opera house? If comfort was a type of bread, then the Velar would be the baker’s shop. It’s not just physical comfort that hugs you inside the new Range Rover Velar, but also the mental kind.

Nothing boosts a motorist’s ego more efficiently than sitting high above every other traffic participant, although visibility might have been better through the rear window. Also, look out for the A-pillars when entering roundabouts and tight corners, as it will block the better part of your view – that’s the price you pay for the sleek exterior and sloping roofline.

Except some flutter from the oversize side mirrors at high speeds, the notion of noise is a myth inside the Range Rover Velar, together with tire and engine noise. Having a conversation on the motorway is a pleasure, but look out for bumpy road sectors or bad asphalt, as the large wheels will make the Velar’s body fiddle and unsettle the suspension at times, joined by a sheet music of thumping noises.

Advice: should this annoy you, then ditch the larger wheels in favor of the smallest you can get (those would be the 18-inch rims). You’ll sacrifice visual appeal, but gain a steadier cruising posture and a more composed ride when the asphalt gets wrinkly. This also could have been the Velar’s nitty-gritty, but the use of lesser quality materials around the lower center console and door interiors reminds us of the Jaguar F-Pace, although the amount of harsh plastics is less generous inside the Velar and rather hidden from your eyesight. Then there’s the shiny piano black center console trim – a notorious fingerprint magnet – which requires constant cleaning.

Otherwise, every aspect of the cabin is nothing short of top-notch and I’m including here the leather on the dashboard, steering wheel and seats. Plus, there’s black Alcantara adorning the pillars and the roof, which adds bonus plushness points. On the flip side, the Alcantara color choice makes the cabin less airy and a tad claustrophobic, but that’s also due to the side windows that don’t go as deeper as you’d expect.

In any case, the optional panoramic sunroof will fix that and again, these are just some minor flaws in an otherwise immaculate cabin. It goes without saying that access in and out of the Velar is a piece of cake. However, even with the optional third seat in the back (which is more like half a seat) five are a crowd inside the Velar. But four will travel in ideal conditions.

Luggage space is also rather philanthropic – you get 632 liters of space in the boot with the rear seats up. Fold them and the loading volume increases to 1,731 liters. Some might argue – on valid grounds - that the boot’s loading lip is too high but air suspension models have a button that lowers the rear end to ease the logistics of loading and unloading.

On top of that, the cubby holes and storage spaces inside are also large enough to accommodate a family’s raft of smartphones, wallets, bottles and the lot. The cabin’s centerpiece is an infotainment system designed to operate on two 10-inch screens positioned one above the other on the center console. It’s also the first thing you notice as you climb inside the new Velar.

Now, the undersigned is a fan of physical buttons – think of modern Porsche interiors, but found himself in a pickle because Land Rover’s solution for the Velar’s user interface is simply no-nonsense and intuitive, not to mention sleek, glitch-free and easy on the eyes.

The only buttons available are in fact rotary knobs – two are used to control climate and seat heating/ventilation and the other one acts as both volume and power button for the whole infotainment setup. Land Rover says the 3-liter V6 diesel inside the new Range Rover Velar only drinks 6.4 l/100 km (44.1 mpg) in the combined cycle, but our real-life fuel consumption didn’t come out of the 11-12 l/100 km bracket. In all fairness, it’s worth mentioning that we didn’t pay much attention to the efficiency aspect.

So, it’s possible that under a lighter foot the fuel consumption average might drop at around 8-9 l/100 km, although we’ve all seen how traffic usually disagrees with that. Every Velar comes with cloth seats and 18-inch wheels (not the most appealing features, though), an eight-speed automatic gearbox, keyless entry and LED lights, among other amenities.

Make the jump to the Velar S, Velar SE or Velar HSE (this is likely to appeal the better part of the clientele) range and you get larger 19-inch wheels, navigation, a rear-view camera, plus a high-end sound system, plusher seats and the lot.

There’s also the option of adding the Dynamic R pack on each of the tree trim levels for sportier cues in and out (bumpers, spoilers and wheels as far as the exterior is concerned and satin-chrome touches inside the cabin).

Or you can go straight to dessert and get the Range Rover Velar First Edition, which is the priciest option on the table. Speaking of price, the entry-level Range Rover Velar starts at €56,400 in Germany and it’s fitted with the 2-liter turbodiesel making 180 PS. The Velar R-Dynamic will set you back €59,800 while the First Edition model wears a budget-wrecking €108,050 price tag.

As you can see, the new Range Rover Velar is surely not a cheap piece of machinery, but you might argue that class comes at a price. Its ups are the stunning design and cabin plushness nicely rounded up by the icing on the cake, which is the almost flawless comfort you get from the SUV. Again, it all has a price, because the air suspension only comes standard on V6 models, but nevertheless, it’s a thing to have on the new Velar.

Without being the sportiest SUV choice out there – look for a Macan or an Alfa Romeo Stelvio if you’re in for fun driving (as much as an SUV can deliver) – the Velar stands out through its personality regardless of what your vantage point is. And this could be its biggest advantage in the never-ending battle with the likes of BMW, Audi and Mercedes-Benz.