Uncompromised performance or everyday usability? Why not both?

In mid-2017, BMW has given the 2-Series Coupé and 2-Series Cabriolet their first facelift, changing minor things from a styling point of view, as well as introducing new equipment and a significant engine update. The previously available M235i, whose N55 3.0-liter turbocharged inline-six engine provided the basis for the M2 Coupé's heart as well, got replaced by the B58 3.0-liter straight-six that's part of BMW's new modular engine family.

With more power and more torque than its predecessor, the M240i is an extremely fast little coupé — and if you spec it with the optional xDrive all-wheel-drive system, it's just a tenth of a second shy of the M2's claimed 0-100 km/h time! Obviously, straight-line speed is not everything, but having driven the M2 last year on the Hungaroring racetrack in Hungary and on the public roads surrounding it, I was truly curious whether the M240i xDrive truly represents an everyday, all-season alternative.

It certainly lacks the visual presence and aggressiveness of the M2: the wheel arches are less pronounced and the bumpers way less muscular. Still, for customers who prefer a more understated look, the M240i will work out just fine. You can easily mistake it for a lesser 2-Series, in which case you'll be gobsmacked seeing how quickly it flies off the line at the traffic light.

But is that enough to consider it as a viable alternative to the M2? Join me as I recount the experience of driving the M240i xDrive Coupé on the road and the track. I don't recall the M2 be much faster under acceleration, only visceral and more dramatic. The M240i offers a more subdued experience but is still very quick. Fitted with the optional rear-biased xDrive AWD system, it goes from 0 to 100 km/h in 4.4 seconds — just 0.1 seconds shy of the quickest M2 (with M-DCT). The engine pulls and sounds terrific under acceleration, and the smooth Steptronic eight-speed automatic adds excitement in Sport+ mode. It's not as quick to shift gears and involving as the M2's M-DCT seven-speed dual-clutch transmission, though. From the moment you enter the first corner on a circuit, you realize this is no M2. Due to the narrower tracks and skinnier tires than the M2's, the M240i xDrive Coupé is less stable and produces less grip. Not to mention it lacks the Active M Differential that does wonders in tight bends.

Still, the M240i xDrive is a lot of fun to throw in corners: its responses are intuitive, and if you put it in Sport+ mode the electronic nannies let the rear wheels slip so you can fool around — even though this is an AWD car. Out on the road, you quickly understand you're never going to reach the limits of the M240i xDrive — not if you care for your life, that is. Even if you overdo it in corners, the AWD system and electronic aids find the necessary traction to maintain the course. 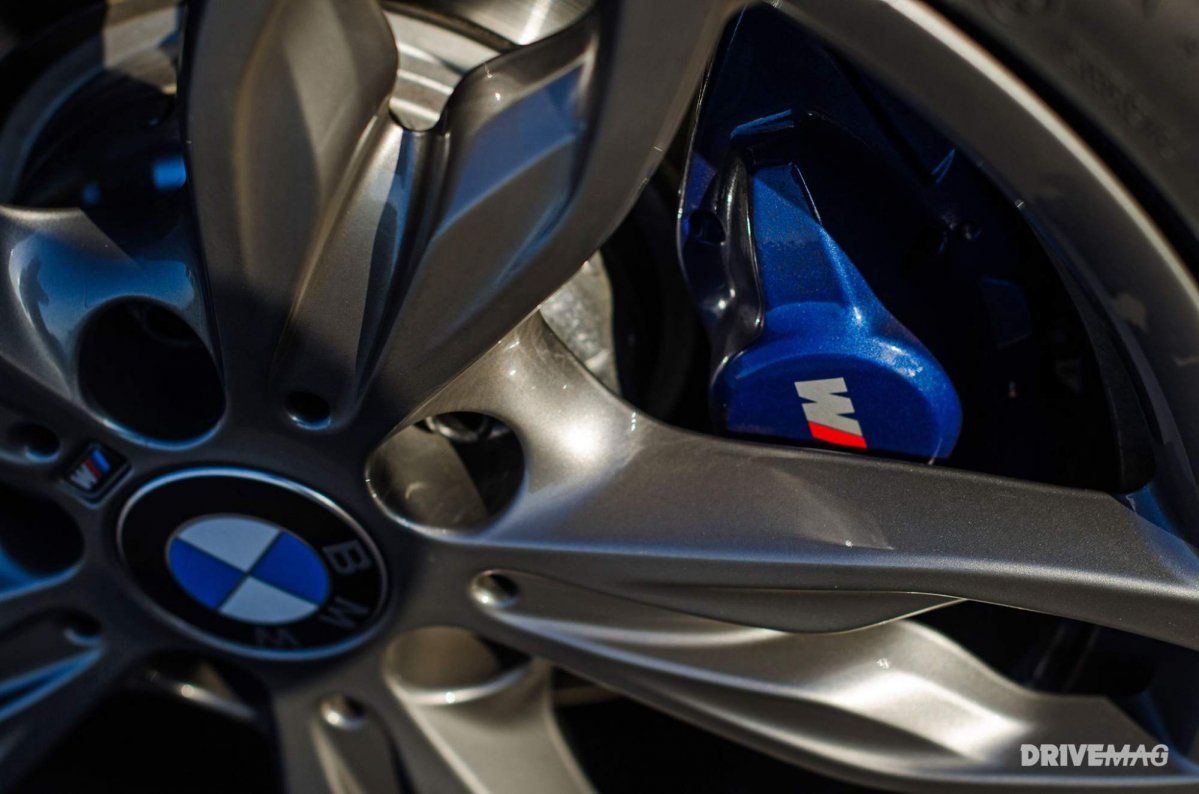 While the 2-Series Coupé hasn't been assessed by Euro NCAP yet, but in North America, the Insurance Institute for Highway Safety (IIHS) gave the pre-facelift 2017 2 Series Coupé the "Top Safety Pick+" highest rating. The small BMW coupé scored "Good" in all measured parameters, including the critical small overlap front impact.

Besides its sound structural crashworthiness, the model we tested has something else going for it: the xDrive all-wheel-drive system which clings for traction when the driver overdoes it, making it safer on the limit than the rear-wheel-drive M240i — especially for drivers who are too brave for their own good. The usual standard active and passive safety features for this segment complete the package. 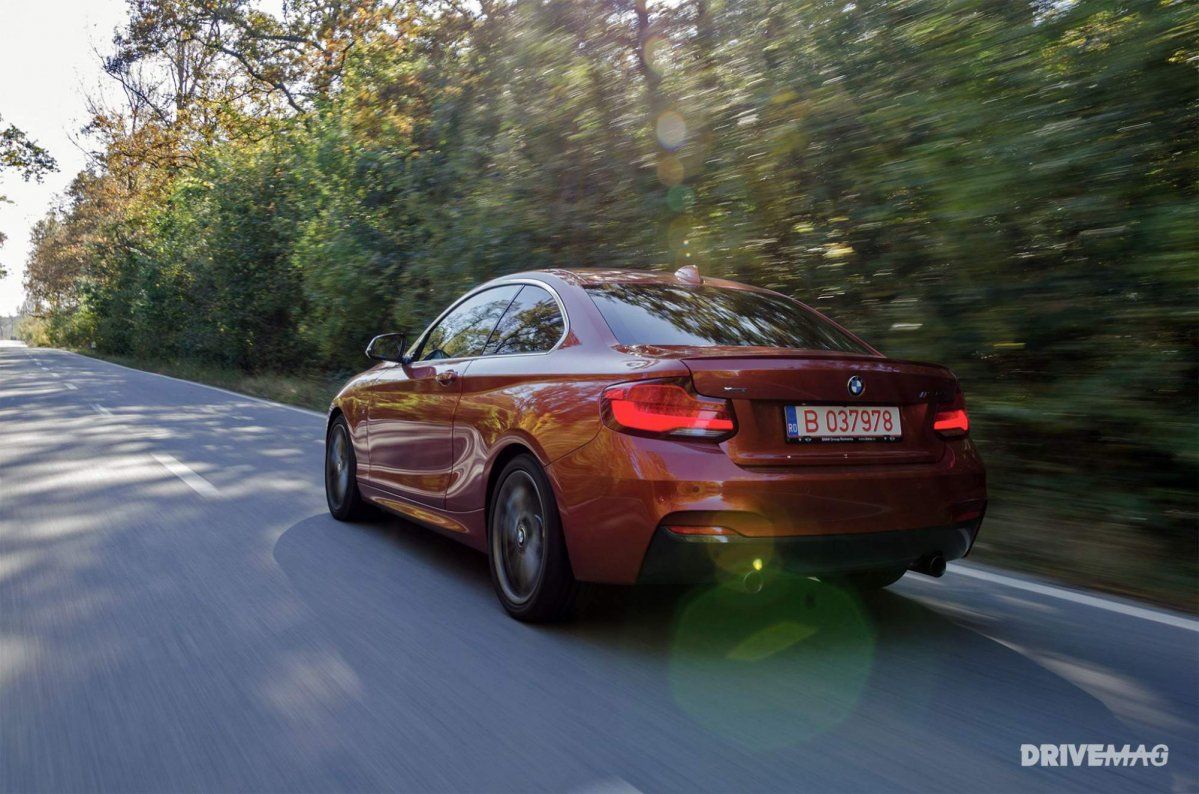 The model we drove featured the optional Adaptive M Suspension, and that is absolutely a must-have on the M240i. Having it means you won't have to sacrifice ride quality for a sharp handling because you'll have both by simply toggling between Comfort and Sport/Sport+ modes. Not even poor quality roads will disturb your peace when the dampers are in Comfort mode, despite riding on 18-inch wheels.

Compared to Sport and Sport+, the Comfort mode also loosens up the steering response and tones down engine noise for a relaxed, cruising atmosphere. You hear less road and engine noise in the M240i than in the M2. In that respect, the M240i is a refined GT while the M2 is a genuine sports car. The standard front sport seats (with optional lumbar support and heating) are very nice to sit in, offering an ideal mix of comfort, lateral support, and low driving position. The controls are logically laid out, meaning you'll adapt almost instantly to the M240i. The interior is very similar to the one in the M2, especially the dashboard. Only subtle details separate the M car from the M240i, such as the carbon fiber trim, M steering wheel sourced from the M4, and the combination of black leather and Alcantara. However, the M240i doesn't feel less special: the standard upholstery featuring Hexagon Anthracite fabric and Alcantara is top notch, as are the soft leather that covers the steering wheel and the aluminum trim on the dash.

But what impressed me the most quality-wise is how well put together the M240i feels. It's rock solid and gives you the impression it can go on forever: nothing rattles inside, regardless of the road surface. The downsides? The plastics below steering wheel level don't belong in a premium vehicle, and the understated vibe of the cabin may not cater to everyone's tastes. 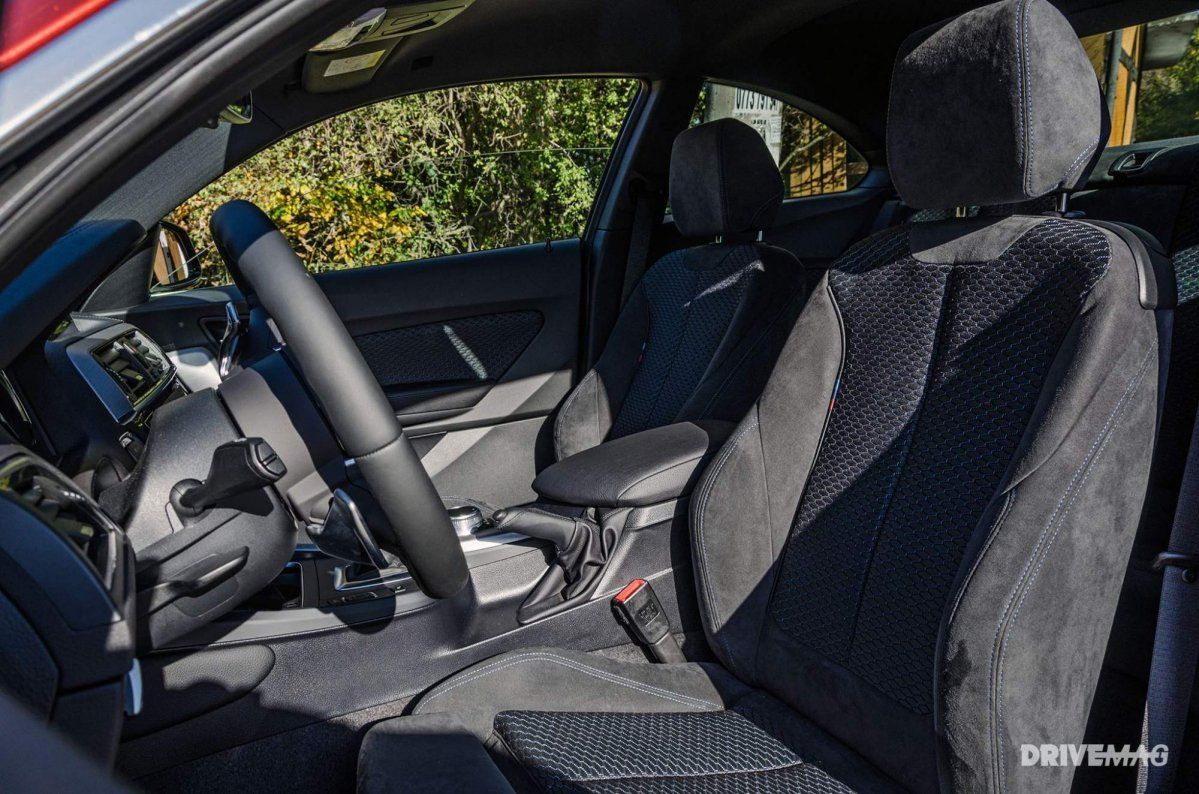 Let's face it, people who buy an M240i are not interested that much in the practical side of ownership. That's not to say the 2 Series Coupé can't perform as a daily driver, quite the contrary. The small coupé offers enough room for four adult passengers and their luggage.

While at the front the M240i will accommodate most body types and heights, the rear seats are decent and provide a surprising amount of knee room — legroom could be better, though. Passengers taller than 1.80 meters (6 feet) will struggle to find a comfortable position, however, as they will graze the ceiling with their heads. Storage spaces are just enough, as is the cargo volume of 390 liters (13.8 cu-ft in US-spec). You can get the optional Navigation system Professional in the facelifted 2018 2-Series Coupé, and that grants you access to an upgraded iDrive infotainment system featuring an 8.8-inch display with configurable tiles and touchscreen capability. Arguably the best infotainment system in the industry, the iDrive is intuitive, responsive, and offers crisp graphics.

As with the M2, you can't get a head-up display system in the M240i, so you'll need to lower your eyes to the instrument panel to get the essential information. 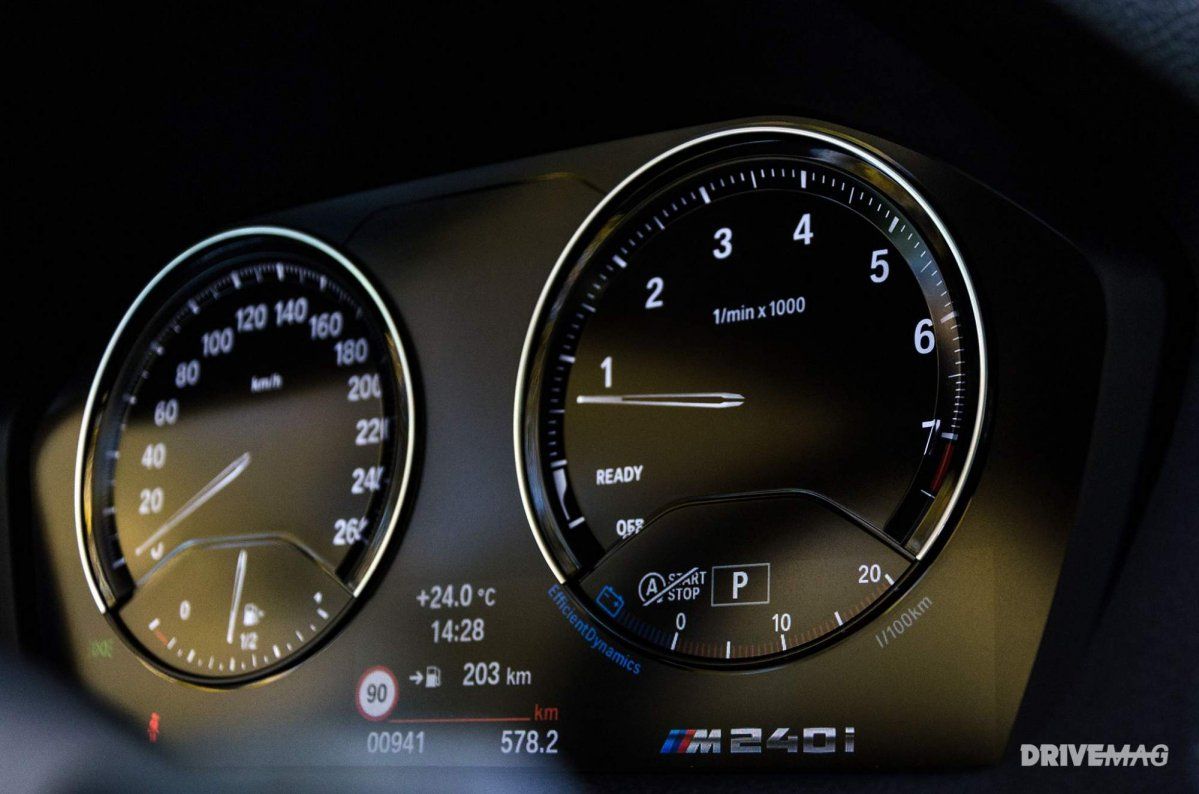 It goes without saying that a car powered by a turbocharged 3.0-liter straight-six gasoline engine will need frequent trips to the pump. However, you'll do that less frequently than you imagine, especially if you don't abuse the M240i every time you drive it — though that's easier said than done. 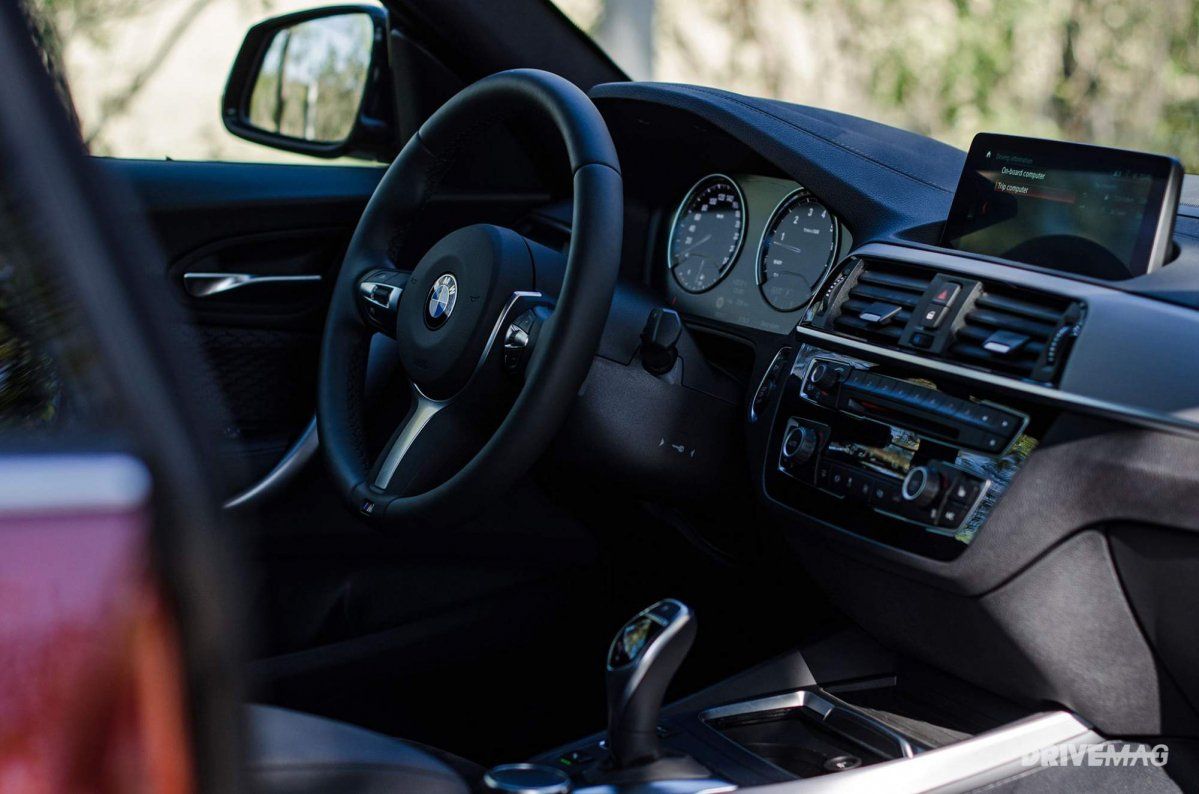 The standard equipment of the 2018 M240i xDrive not only covers the essentials but also goes above expectations. You get things like the leather-wrapped multifunction M steering wheel, 8-speed Steptronic automatic transmission (there's no manual option for the xDrive model), variable sport steering, front sport seats, 60:40 split-folding rear seat, and more.

On the outside, the 18-inch M light-alloy wheels, M Sport brakes, and the M aerodynamics package are standard as well, as are the rain-sensing wipers, automatic Bi-LED headlights, cruise control with brake function, and more. However, to avoid post-purchase regret, you need to delve into the options list and tick the boxes for the Adaptive M Suspension (€760) and BMW Navigation system Professional (€1,850). 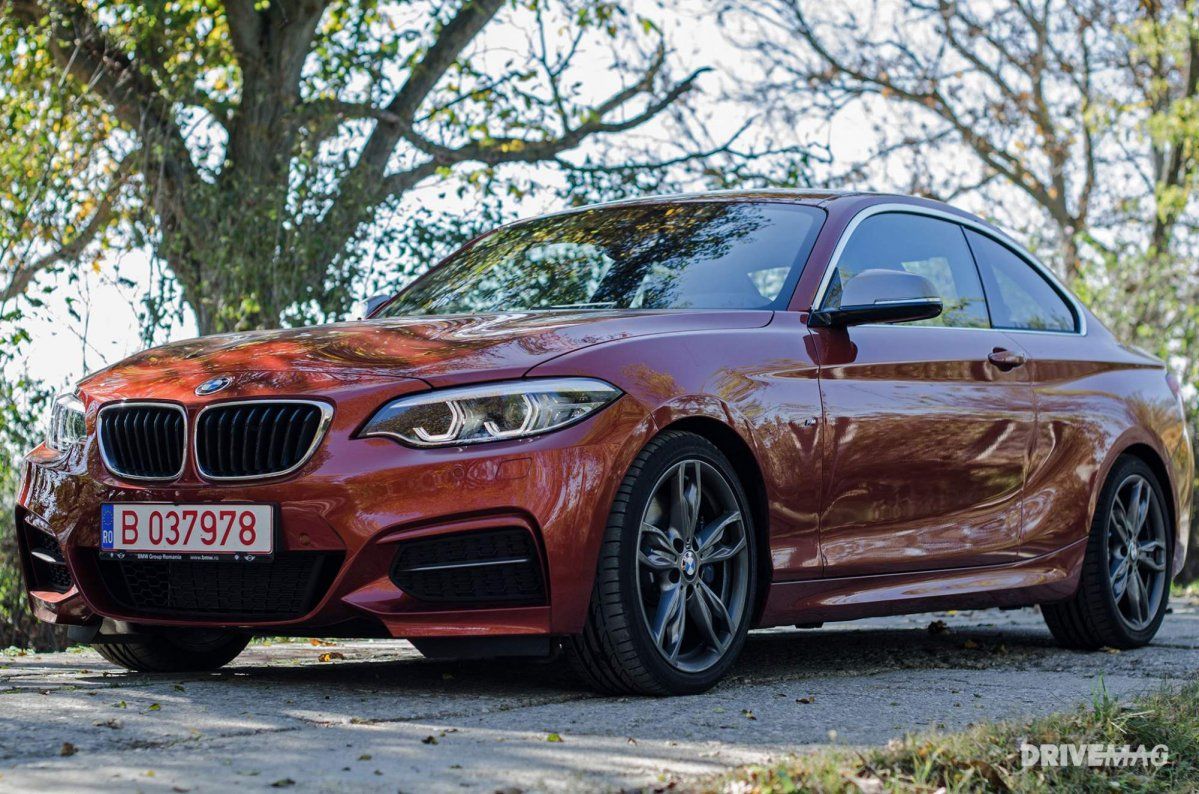 In some markets, you can still go old-school and buy the M240i Coupé in standard rear-wheel-drive configuration with a six-speed manual transmission. That's the sweet spot of the range if you ask me, and you should snatch it while you still can. BMW has already begun ditching the manual transmission — for instance, in Germany, you can no longer have it. A manual, RWD M240i Coupé costs around €47,500, depending on the market where it is (still) available, making it €12,000 cheaper than a manual M2 Coupé.

The way I see it is the M240i offers excellent performance for enthusiasts both on the road and on the track, as well as everyday usability. As for the M2, it only makes sense for drivers who frequently go to track days and who want a more hardcore, visceral driving experience. That and the pride of owning a full-blown BMW M model, of course.