Mitsubishi proves premium brands aren't the only ones that can make a good, attractive "coupé-SUV"

Back when Mitsubishi was building cars for driving enthusiasts, the Eclipse was one of its most desirable models, alongside the legendary Lancer Evo. Years have passed, and the Japanese brand has gradually phased out its most exciting cars, including the Evo. Its current European lineup is almost exclusively made up of SUVs, off-roaders, and pickup trucks — only the Space Star hatchback (sold as the Mirage in the United States) breaks the pattern.

That may help explain how Mitsubishi decided to give one of its SUVs the Eclipse Cross name. But the official explanation is this model combines the sporty attributes of the Eclipse with the practicality of a crossover. That is reflected in the design as well since we're dealing with a "coupé-SUV" thing: the Eclipse Cross has a sloping roofline and an ascending waistline, with a small glazed area in between.

The face features probably the best rendition of Mitsubishi's Dynamic Shield design, while the rear end reminds of the previous-generation Honda Civic hatchback due to the two-piece window. Oddly enough, all these different styles come together quite nicely, and I think the Eclipse Cross is one of the best-looking SUVs on sale right now.

Remember we're still talking about a proper SUV here, with a spacious and practical interior and all-wheel drive, so is the use of the Eclipse name justified on this model or just a blasphemy? I'm as curious as you are to find out. Our tester featured an all-new 1.5-liter turbocharged gasoline unit that makes 163 hp at 5,500 rpm and 250 Nm of torque continually available between 1,800 and 4,500 rpm. Considering the vehicle's curb weight of just under 1.7 tonnes, it becomes clear that sports car thrills aren't on the menu. However, the engine's low-end torque and quick-revving nature make it surprisingly nippy.

Put your foot down, and the Eclipse Cross picks up speed quickly - it certainly feels quicker than the quoted 0-100 km/h time of 9.8 s. You won't be the star of the Autobahn, though, because the top speed is only 200 km/h.

The engine is linked to a CVT, hence the constant annoying whine when you accelerate more energetically. It simulates eight gears, and you can even shuffle through them using the paddle shifters. It's not the most exciting experience, but the manual mode is decent for a CVT. However, the sense of disconnection with the engine (typical to CVTs) remains. A 150-hp 2.2-liter turbodiesel engine mated to an eight-speed torque converter automatic transmission will arrive later this year. The Eclipse Cross doesn't handle as the Eclipse used to, but it corners nicely, with little body roll. You can power your way through corners in complete confidence as the suspension will take the punishment. It's one of the best handling SUVs out there, but the Eclipse Cross is let down a bit by the electric power steering that feels artificial and lacks progressiveness.

So what about going off-road? Well, you can do that occasionally: after all, this is an SUV with decent ground clearance and all-wheel-drive. Besides the default Auto mode, the four-by-four system offers snow and gravel settings. For your peace of mind, don't mistake this sporty SUV for a rugged body-on-frame off-roader like the Pajero. Euro NCAP has assessed the Mitsubishi Eclipse Cross in November 2017 and found it to be one of the safest SUVs on the market. The maximum five-star rating doesn't tell the whole story, though. Adult occupant protection was rated at 97 percent, child occupant at 79 percent, and pedestrian protection at 80 percent.

The rating for Safety Assist systems was 71 percent, thanks to standard assistance systems such as seat belt reminder for all seats, Lane Keeping Assist, Collision Warning System with Emergency Brake Assist, and speed limiter, among other things.

The Eclipse Cross' crashworthiness hasn't been tested in the United States, but the ratings should be at least as good given the severity of European crash tests. The Eclipse Cross is a comfortable cruiser most of the time: the high-set driving position is spot on, the suspension is quiet and cushy, and cabin noise is kept in check. However, at speeds exceeding 100 km/h, the cabin starts to get noisy, with plenty of turbulence produced by the unnecessarily huge side mirrors.

When the road surface gets really rough, the suspension becomes a bit crashy — nothing unbearable, though. For all its whining, the CVT adds to the comfortable driving experience, especially around town. The seats are comfy and easily adjustable: even rear passengers benefit from reclining backrests. 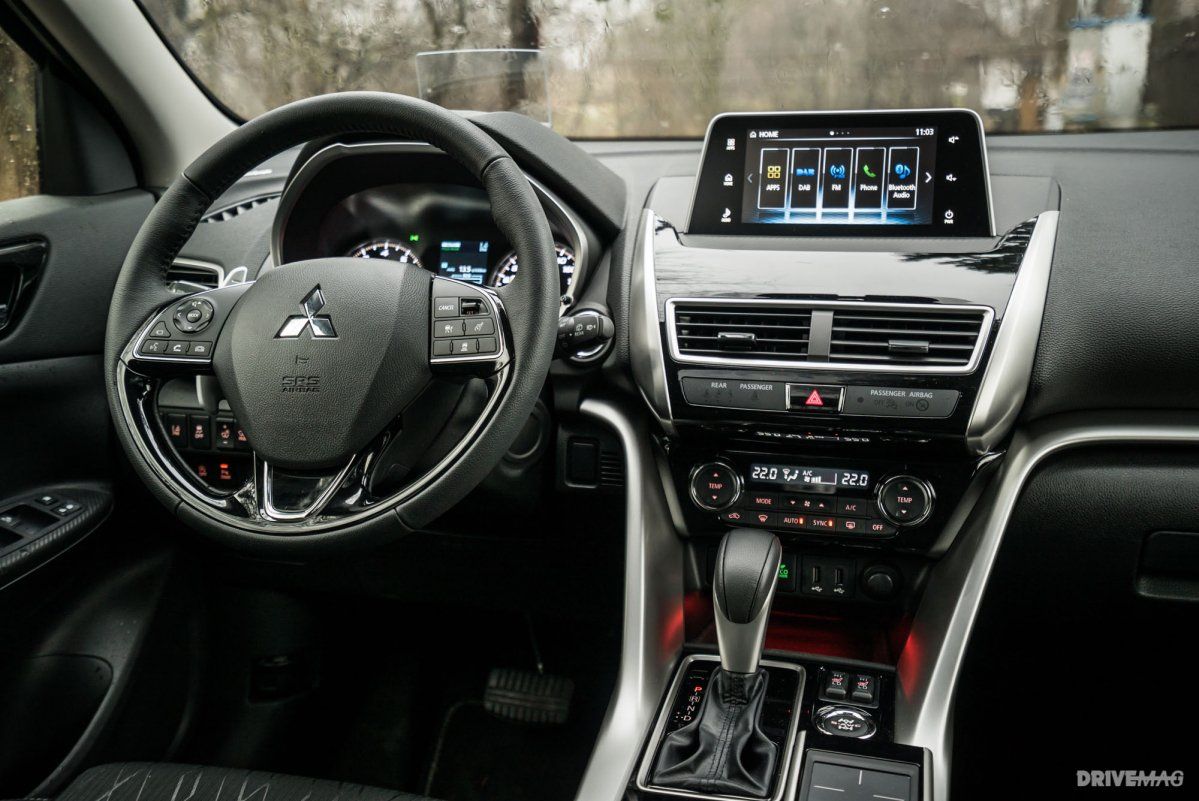 The cabin is a welcoming place. Build quality is solid (after all, it's a car made in Japan), and the dashboard has an interesting design. A neat touch is the fact that the center console mimics the front grille's Dynamic Shield design. I like the soft plastic used on the upper half of the dash and the fabric upholstery, but the other materials, not so much.

The plastics used in the lower half of the cabin look and feel cheap for a car that costs more than 30 thousand euros. The old-school head-up display system lets the interior down too, as do the plastics that imitate piano black wood and carbon fiber. The switchgear doesn't ooze quality either. Despite the sloping roofline, there's a generous amount of space in the back for a six-footer (183-cm) like me. Three adults can travel comfortably in the back seat, as there's plenty of room for their elbows, knees, and legs. That's also due to the fairly small transmission tunnel. Even with the panoramic sunroof, I had just enough headroom. However, taller passengers won't be so lucky.

The sliding and reclining bench seat is also split folding, helping you find the right balance between passenger space and cargo volume. The boot can swallow between 378 and 485 liters of stuff, and if you fold down the rear seats, the loading capacity reaches 1,159 liters. As for storage spaces, the Eclipse Cross offers decently-sized door bins in the front (not so much in the rear), two cup holders on the center tunnel, a spacious compartment inside the front armrest, and another pair of cup holders in the rear folding armrest. The Mitsubishi Eclipse Cross we tested featured the Smartphone Link Display Audio (SDA) infotainment system that can be operated via a 7-inch touchscreen, a touchpad on the center stack, buttons on the steering wheel, or voice commands. It has dated graphics, but it compensates for that with adequate usability.

The interface is reasonably clear and intuitive to use — and least distracting using the touchpad and the shortcut keys near it. The system is compatible with Android Auto and Apple CarPlay, which explains the lack of a navigation system. However, I couldn't get any of the smartphone mirroring features to work: it's either too complicated or I'm too unskilled in this field. Pairing your phone via Bluetooth isn't rocket science, though, and there are also two USB ports to charge/connect your mobile devices. Some may find the shape of the touchscreen and the tiles in the menu's home screen too similar to BMW's iDrive — surely a compliment for the Bavarians' excellent system. Traditionally, CVTs and fuel efficiency aren't best pals, and that's the case here too. While Mitsubishi claims the Eclipse Cross 1.5 AWD CVT averages 7 l/100 km, the lowest figure shown by the trip computer was 8.9 l/100 km. Mind you, that only lasted with the Eco Mode on and while driving in an economy-oriented manner.

By the way, the car feels like it loses 50 percent of power when Eco Mode is activated. We drove the car for around 400 kilometers, and most of the time the combined fuel consumption sat above the 10 l/100 km mark. The difference between the official figure and reality is a bit too big in my opinion. As with most Japanese manufacturers, Mitsubishi doesn't offer tons of optional features. The only optional extra for the Eclipse Cross is the paint, with the rest of the equipment progressively stacked in trim levels. Base models offer almost everything you need, and mid- to upper-range trims come loaded with stuff. The Eclipse Cross is one of the few non-premium coupe-SUVs available right now, and one of the few that doesn't sacrifice practicality for styling. So, what's not to like? Well, interior quality could be improved, and the crossover would be so much better to drive with a dual-clutch transmission instead of the CVT.

While base front-wheel-drive models with manual transmission start at just under €22,000 in Germany, the cheapest AWD model with CVT can be had for €29,190. Our Romanian-spec test car had a €33,903 price. The pricing may be a hard pill to swallow for some, but that's until you remember it's hard to find a direct competitor for the Eclipse Cross. Compare it to a premium model and it becomes a bargain, actually.