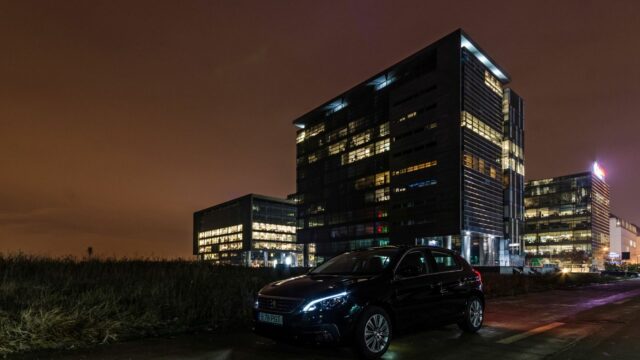 Winner of the 2014 Car of the Year award, the Peugeot 308 was an eloquent depiction of the French manufacturer’s revolution. The new car was lighter, simpler (interior design-wise), and more frugal than the one it replaced. And it wasn’t just a mathematical upgrade: the brand-new hatchback kept its French car chicness while dramatically enhancing its road handling abilities. The 308 was, indeed, a game changer for Peugeot.

But time is unforgiving, so the 308 needed a refresh. The 2017 mid-cycle facelift brings a series of improvements in order to keep Sochaux’s hatchback in the game, although you’d hardly think that judging by its looks solely.

The front fascia is where the most changes are, albeit subtle: the grille’s design is in line with the 3008’s, the LED Daylight Running Lights come as standard on all trims and the air intakes grew in number and size.

However, the 308’s update is still considerably thorough: a new engine version is on its way, and the eight-speed automatic promises not only more comfort but also higher efficiency. Moreover, the safety features list gets improved with new tech borrowed from newer models in Peugeot's lineup, such as the 3008. Last but not least, 308's infotainment system gets more responsive, hence easier to operate.

Fortunately, all these changes are not to affect the 308's spirit: a comfortable compact hatchback made for everyday use which shines even more when taken to the open road. But is this enough to keep its crown? That's what we're trying to find out in this test drive.

Among the novelties, the refreshed 308 brings a 1.6-liter BlueHDI unit now packing 120 horsepower. Another one would be the eight-speed automatic gearbox that, Peugeot claims, is seven percent more efficient than the actual six-speed auto.

We, however, enjoyed the classic 308 experience with our tester, once again being confirmed that the 120-hp 1.6-liter diesel and the six-speed manual are still a decent match in terms of driving dynamics and fuel consumption.

On paper, the 308 is not only the most economical offer in the sub-two liter diesel category but also the quickest to 62 mph (9.6 seconds). In real life, the transmission's long throw — found in contrast with the small wheel, sharp steering — is a constant reminder that you've bought a diesel, compact family car, so where's the rush, eh? Seriously now, don't engage in overtakes if you don't have a good stretch of clear road ahead.

But you can't ignore its massive potential to make you feel relaxed. You don’t need numbers. Maybe all you need is a good stretch of road, and some good music to keep you company.

You can be sure of one thing when driving the 308: whenever you find yourself on a winding road, you’ll lack the impulse of stepping it up.

Despite its small, oddly-placed steering wheel (you look at the instrument panel over, not through it) the 308 HDi is not a car to be aggressive with. The tiller can quickly steer the car but won’t give you satisfactory feedback in the process.

Thanks to its weight drop, the 308 feels agile and has great potential — something the 308 GTi 270 can confirm. However, the life in a diesel is as unspectacular as you’d imagine.

We’d say the 2018 model wouldn’t have to worry about the new, more rigorous safety standard: the facelift brought a lot of gadgetry in the French hatchback, from Active Safety Brake to Active Lane Departure Warning System, Adaptive Cruise Control, Distance Alert, and even a 180-degree rear camera view.

Just as with any car on the market, the engineers working on the 308’s suspension had to find a compromise spot between comfort and agility, something they didn’t miss by much, although there is more to say about the car’s shock-absorbing ability rather than its agility. Dive in a corner and you'll feel the body starting to roll, then smoothly being kept in place by the car's springs.

The cabin provides a decent amount of room for four adults (even five, for short journeys). As a driver, however, finding your sweet spot behind the wheel might be tricky if you’re the conservative type. I find the small steering wheel a fresh approach but I also know it’s not everyone’s cup of tea. The steering wheels' unfamiliar size proves a challenge when it comes to calibrating you effort to take a turn.

The soundproofing is within the class' extremes — our tester's winter tires were a bit noisy — and the seating, although well designed, isn't as cosy as you'd expect, especially if you're a six-footer who finds himself in the back seat.

Peugeot’s game in the perceived quality area is as strong as ever now, with the 308 being one of the first eloquent showcases.

The adoption of a cleaner dashboard was definitely a winner in our books, and the materials themselves are not deceiving at all: the plastics selection (and placement) boasts the good stuff in the important places, making the 308's interior something satisfactory to touch.

We were not exempted by the piano black inserts — which look good but are scratch-sensitive and powerful dust magnets. However, the plastic/metallic inserts ratio is a detail that makes the 308’s interior appealing to the eye.

At 470 liters, the 308’s cargo space is another strong selling point in the hatchback segment; by folding the 60/40 rear bench you can extend it to 1,309 liters if you need to carry something really voluminous. Unfortunately, while these numbers are comforting, inserting big objects into the car is not easy due to the tall load lip, and the rear seats don’t fold completely flat.

There’s plenty of interior storage for small objects. The glove box compartment will keep your small water bottle cool while the (covered) cup holder can be cleared to make room for your phone and wallet. It’s not the most ergonomic approach, to be honest, but it’ll do.

The 308’s minimalist dashboard design opens up an already common debate: does the lack of buttons make our lives behind the wheel better or not? All we can say about the lonesome 9.2-inch touchscreen found in the 308 works just well now — it’s more responsive than before, making it easier to operate. Smartphone connectivity (via USB and Bluetooth) is available on every trim and works just fine, no software conflicts whatsoever.

If we say we’d like to see some of the controls remain physical for a bit longer we would definitely seem reactionary… but. Although you don't need to find your way around a laden dash, you'll have to divert your attention from the road every time you need to operate the air-con, as there are at least two clicks needed to change the temperature.

If you’re looking for a diesel because they’re highly efficient when it comes to fuel consumption look no further than Peugeot’s 1.6 HDi. At just 3.3 l/100 km (71 mpg) it is the class leader. There’s also the HDi 100 (hp) in 308’s lineup, promising an even better efficiency rating but we really don’t want to imagine what’s like having a compact crossover with just 100 hp and 245 Nm of torque.

We managed to score 6.2 l/100 km over a busy weekend in a crowded city. Impressing? We’d reckon it’s more than satisfactory.

There are up to six different trim levels, making it easier for you to find your most suitable 308 model. If you’re on a tight budget, the 1.2-liter PureTech Access promises you diesel-like running costs and comes with equipment to cover the basic needs.

The 1.6-liter HDi in Allure guise boasts not only frugality but also features a comfortable life behind the wheel, sitting just under the GT trim regarding equipment offered. Besides the plethora of safety features, the Allure comes with 2-zone air-con, 17-inch alloys, and automatic lights and wipers.

Compared to the class' leader — that would be the much-appraised Golf — the 308's standard features list is more generous, and the extras aren't as expensive. €600 for the panoramic roof? Bargain!

With prices ranging from €18.950 (1.2 PureTech Access) to €35,550 (GTi by Peugeot Sport), the French hatchback comes in flavors suitable for every taste and budget.

The entry-level 308 is a couple of thousand Euros more affordable than a Golf with similar features, a price difference that decreases once you go up the trims. The optional extras list is not long — as the standard trims are quite generous — and the price tag for every extra feature is enticing, making the 308 an even more desirable alternative in the compact segment. There are, however, some areas in which the French hatchback falls behind its rivals — it lacks an adaptive damping system, for example.

Although the styling didn’t suffer major alterations, the refreshed 308 manages to keep itself appealing through all the technological upgrades it’s featuring.