Pursuing the premium brand recognition, Volkswagen once again dresses up its mid-size saloon

This isn’t the first time Volkswagen has tried to add some more soul to one of its most appreciated models, the Passat. In 2008, the German manufacturer brought us the Passat CC (Comfort Coupé), a daring version featuring a sweeping roofline.

Volkswagen stressed that this is not just a cramped sedan but a four-door coupé instead, yet it couldn’t deny that the car’s ride was a bit too much on the firm side.

However, the CC’s biggest issue wasn’t this disparity but rather the fact that people weren’t ready to pay more money for a more elegant Volkswagen. Just like the Phaeton, the CC was too good for the loyal VW clientele.

But the Germans are at it again: Arteon is another attempt to up the brand on the premium scale, also proving that Volkswagen learned from the past mistakes.

While the CC was more like a fashion statement (with its corresponding downsides) the Arteon promises not only better looks but as much room, practicality, and comfort as its bland sibling. Here's what we've discovered during our test drive. 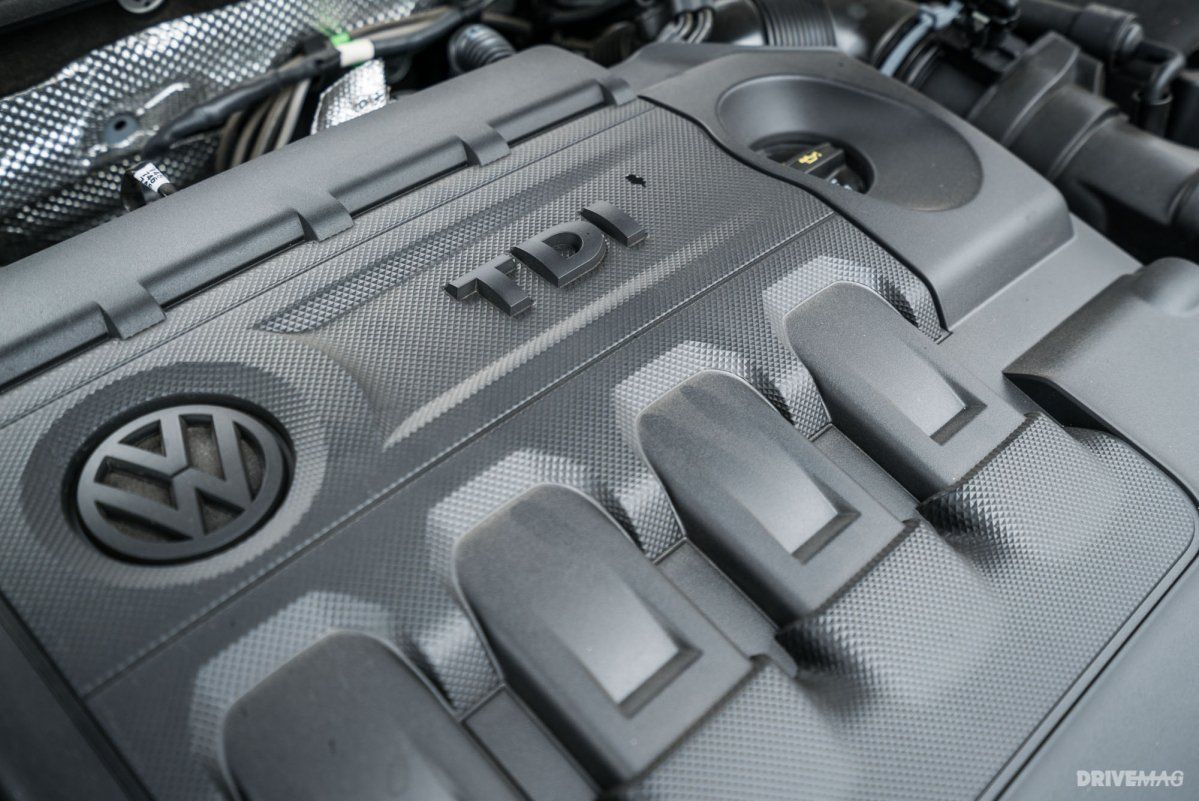 Arteon’s engine lineup consists of 2.0-liter four-pot engines only, with power ranging from 150 to 280 hp. Our tester was a 150-hp 2.0 TDI mated to the seven-speed DSG automatic gearbox. It’s the minimum a two-liter Volkswagen engine can offer and enough for most of your daily activities.

If you don’t care about just how quick off the line your Arteon is, then you’d be rewarded with many miles per gallon, as this is the most frugal setup you can get. The DSG ‘box is, as usual, a satisfying feature in a Volkswagen, making the best of the engine in both power delivery and fuel efficiency areas. The only thing this engine lacks is refinement: its clatter can make a Citroën oil-burner blush. There are a few things you needn’t forget about the Arteon: it is big (hence a bit heavy) and it's front-engined. So, although Arteon’s electronic helpers do their job keeping grip high in most cases, you won't trick physics forever: if you want a proper hoon, know the Arteon can't be a substitute for a front-engine, rear-wheel-drive saloon.

However, if you want your Arteon more spirited, go for a more powerful engine (in 4MOTION flavor) and you’ll be granted more grip on fast-paced B-roads, courtesy of the all-wheel-drive system. Furthermore, you can also opt for the Dynamic Chassis Control feature, which comes with adaptive dampers in order to tone down the body roll and stiffen the car altogether.

All in all, Arteon seems to have aimed at that sweet spot when it comes to road manners, and it feels like it has succeeded. Arteon managed to score a five-star rating in Euro NCAP crash tests thanks to its plethora of safety features. Airbags all around, and electronic active safety features like the ABS, ESP, and AEB (autonomous emergency braking) come as standard.

The safety optional extras list is even more branchy: the second-gen Emergency Assist (which combines Adaptive Cruise Control, Side Assist, and Lane Assist) can pull the car over, safely, if the driver becomes unresponsive. The updated Dynamic Light Assist rely on sat-nav data to turn in before you enter the corner.

Satellite-provided data is used by the Adaptive Cruise Control as well, which now adjusts the speed according to the road ahead of you. Arteon’s sharp edges aren’t necessarily translated into a crisp ride. This, of course, is a feature on the plus side, as the previous four-door coupé bearing the VW badge was criticized for lacking fluidity. It’s even more impressive as our (R-Line) tester sits 20mm lower to the ground compared to other trims.

I’m convinced it wouldn’t have been as smooth with the 19-inch (or, God forbid, 20-inch) wheels it originally featured, which is why I recommend you avoid them if comfort is your priority. Although it can be sharpened through the Dynamic Chassis Control, the Arteon feels like it’s been optimized for the grand tourer’s spirit. 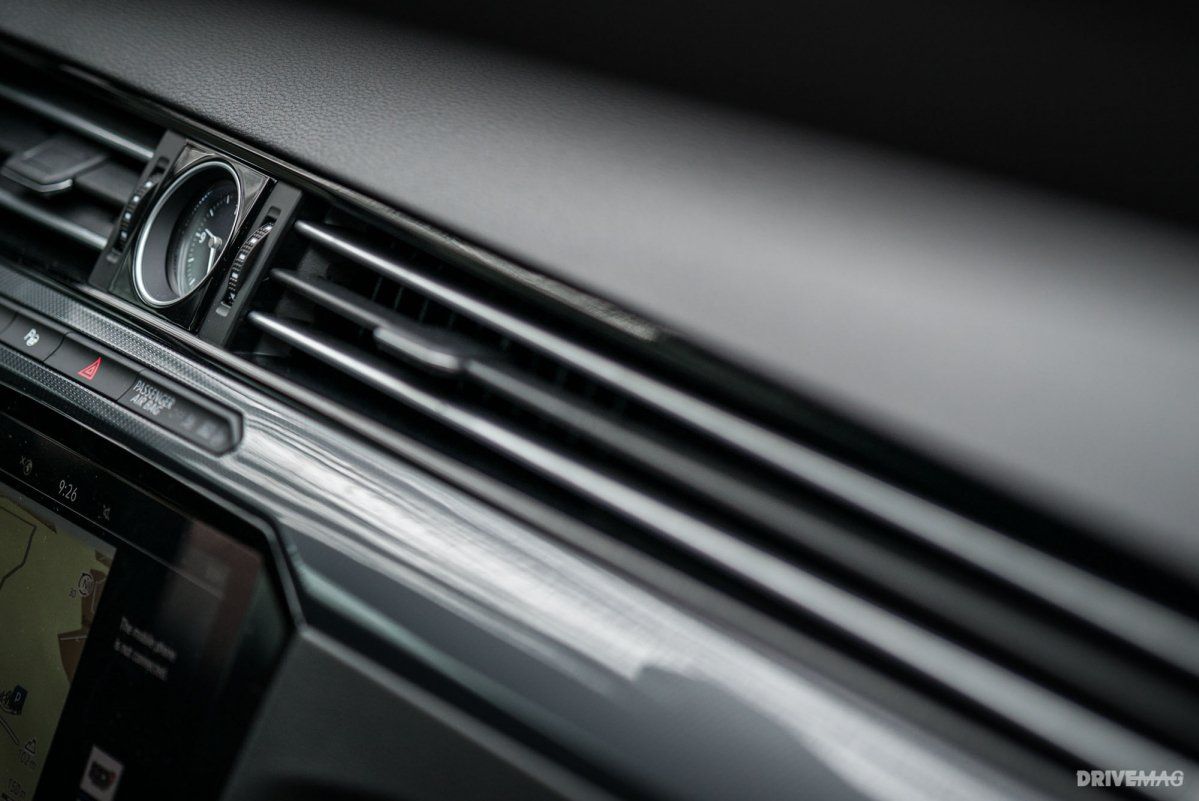 After gazing at its bold exterior design, you might curb your enthusiasm when entering the car. Regarding the interior design: if you compare the Passat and the Arteon you’ll get into a tough “spot the differences” game.

But this sibling similarity is not unusual, and it’s definitely not a drawback, as the Passat’s fit and finish is spot on. 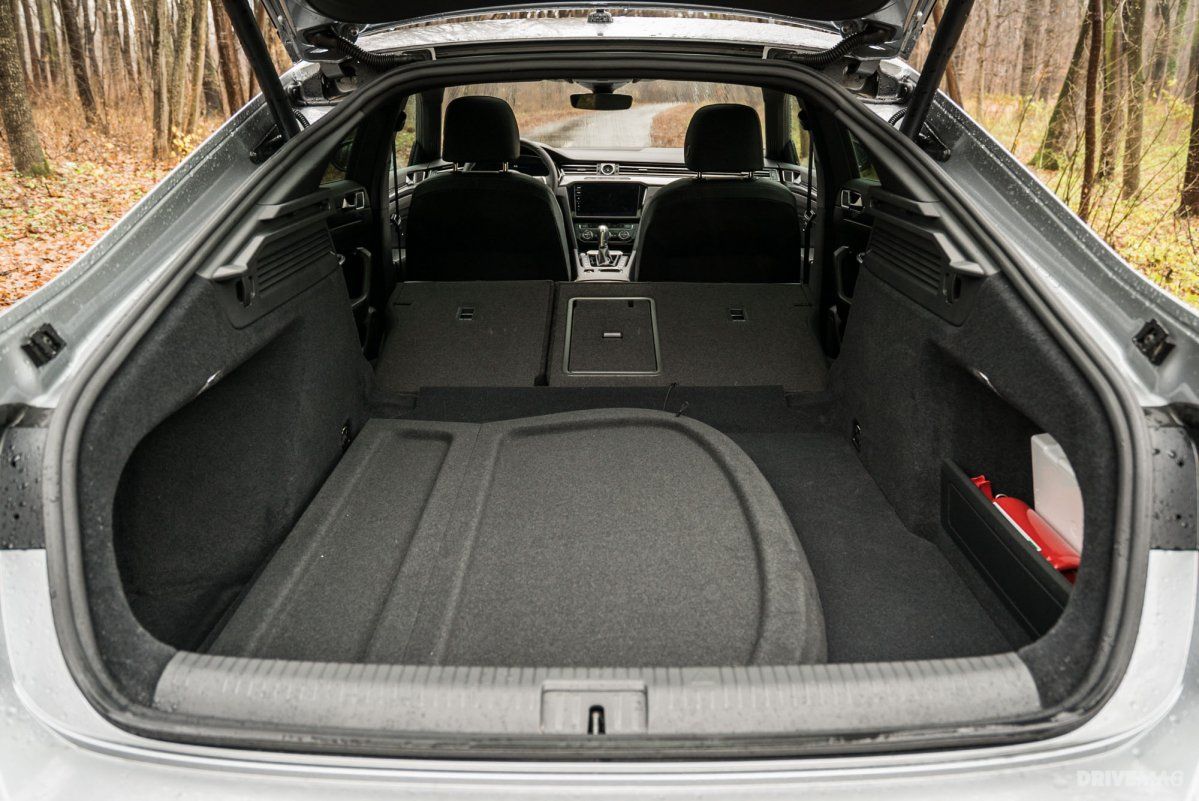 The extra length and width the Arteon boasts over the Passat is cleverly exploited to make the sleek German saloon a bit more spacious inside. The sloping roofline might trouble the tall rear seat occupants a bit but the knee room is best in class. There’s room for up to five adults, although the middle rear seat might get cramped in the 4MOTION models due to the overhung transmission tunnel.

Unlike the previous Passat four-door coupé derivative, the Arteon enhances its cargo space practicality with a large — fastback-style — tailgate that encompasses the rear window. At 563 liters, the boot itself is huge, another area where the Arteon is the class leader. All the cool cars nowadays get rid of analog controls in favor of touch-, or gesture-based commands, and Arteon is no different. If you don’t like the idea of poking a screen hoping you’ve “pressed” the right button, opt for the 12.3-inch fully-digital instrument cluster.

VW’s version of Audi’s Virtual Cockpit, the Active Info Display prompts all the info you need and is operated by the buttons mounted on the steering wheel. This way, you won’t have to get your hands off the wheel, or the eyes off the road. 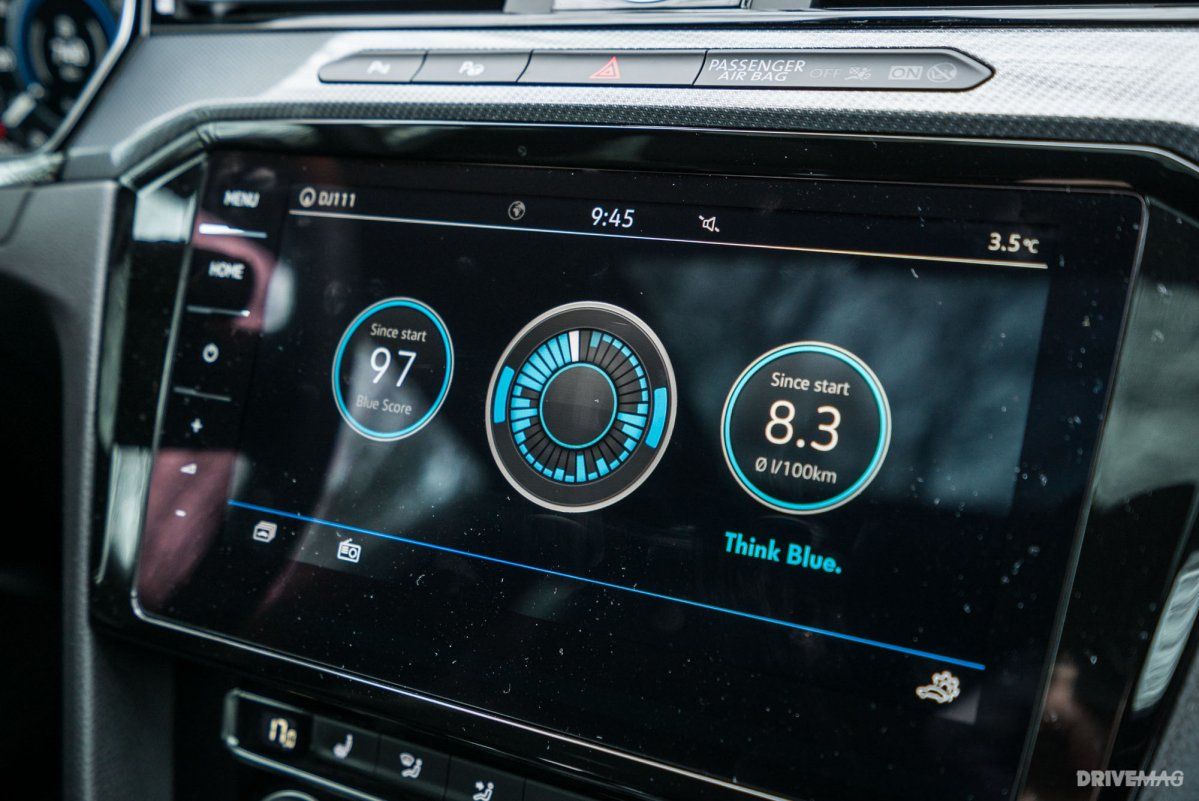 Settling for a 150 horsepower, 340 Nm of torque, 9.1-second-0-to-100-km/h Arteon will prove rewarding on the fuel efficiency side. Volkswagen claims Arteon needs no more than 4.5 l/100 km (52 mpg; mixed cycle) which is, naturally, impossible to attain in real life. 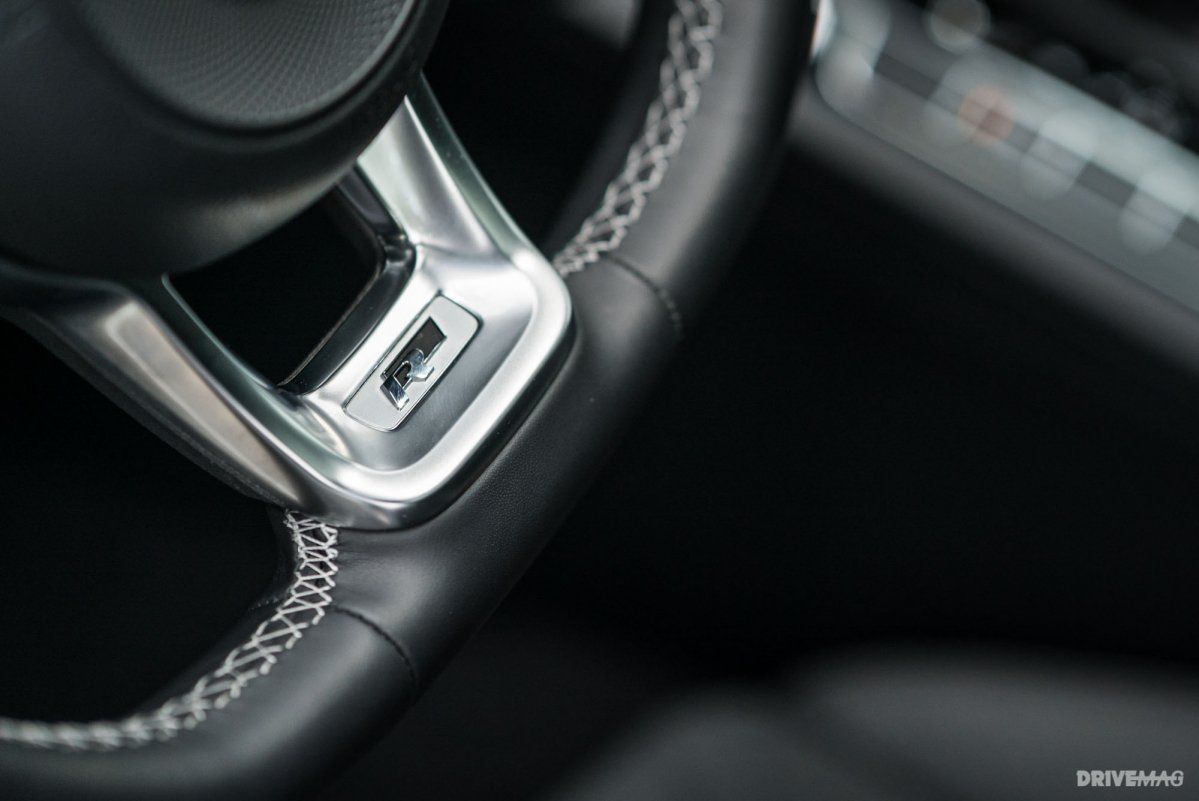 Just like its designer suit might hint, the Arteon comes well equipped from the start, with 18-inch alloy wheels, climate control, leather on the seats, electric mirrors, and front windows, etc.

In regular Volkswagen fashion, the optional equipment list is even longer, as long as you intend to spend a lot of money on this car. 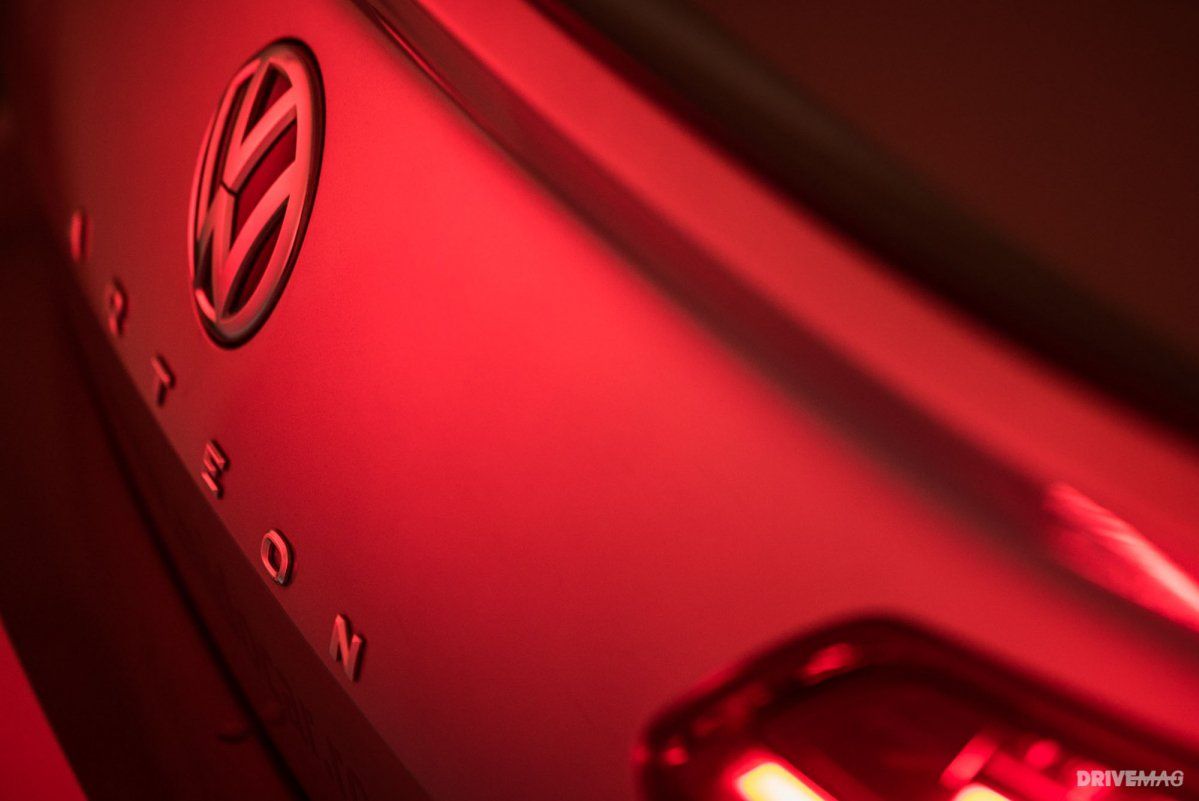 At €41,950 (Germany), the 150-hp Arteon 2.0 TDI R-Line sits just between the premium four-door coupés (like the BMW 418d Gran Coupé) and its regularly-looking siblings VW Passat, and Škoda Superb.

Besides the brand’s image, aspiring to the premium segment is problematic due to massive depreciation as well; losing more than half the original price is a hard hit for a VW owner. If you accept this as a natural cause, then you’ve just bought yourself a very good looking, promising car.