After two facelifts, Ford EcoSport got a complete makeover and is ready for battle

Ford is trying to get on top of the European SUV craze. It already has the capable Kuga and the American with a diesel heart known as Edge in the European range of SUVs.

The smallest of the bunch is the EcoSport. It started as an uninspired small SUV built in India. Since then it underwent two important facelifts. The new and improved Ford EcoSport is now built at the Romanian Ford plant in the city of Craiova. Ford Craiova is supplying EcoSports for the whole Europe, including Great Britain, plus a few other markets like South Africa and Singapore.

The new Ecosport has a new interior, similar to the one found on the new Fiesta. It gets the desirable ST-Line trim and a new exterior look. It now has all it needs to fight for a nice chunk of the European SUV market.

We've got the call to join the Romanian launch of the new Ford EcoSport, and that included a tour of the Ford plant in the city of Craiova. On the two days of the regional launch of the new Ford EcoSport we've got to drive both the 125 and the 140 hp versions of the 1.0 Ecoboost engine.
We've already tested the 140 hp version of the 1.0 liter EcoBoost engine on the Ford EcoSport, so we will talk about the 125 hp version.
The 1.5 TDCI diesel engine will be available from the summer of 2018 as well as the 4x4 version of the EcoSport.
The low-power version of the EcoBoost three-pot engine is still powerful enough for a spirited drive. The engine is mated with a six-speed sleek-shifting manual box. The throw is quite long between shifts, but the package is pretty good.
The engine pulls for the whole rev range, running out of puff on the red line. The manufacturer claims a 12.7 sec run to the 100 km/h, but the car feels faster. 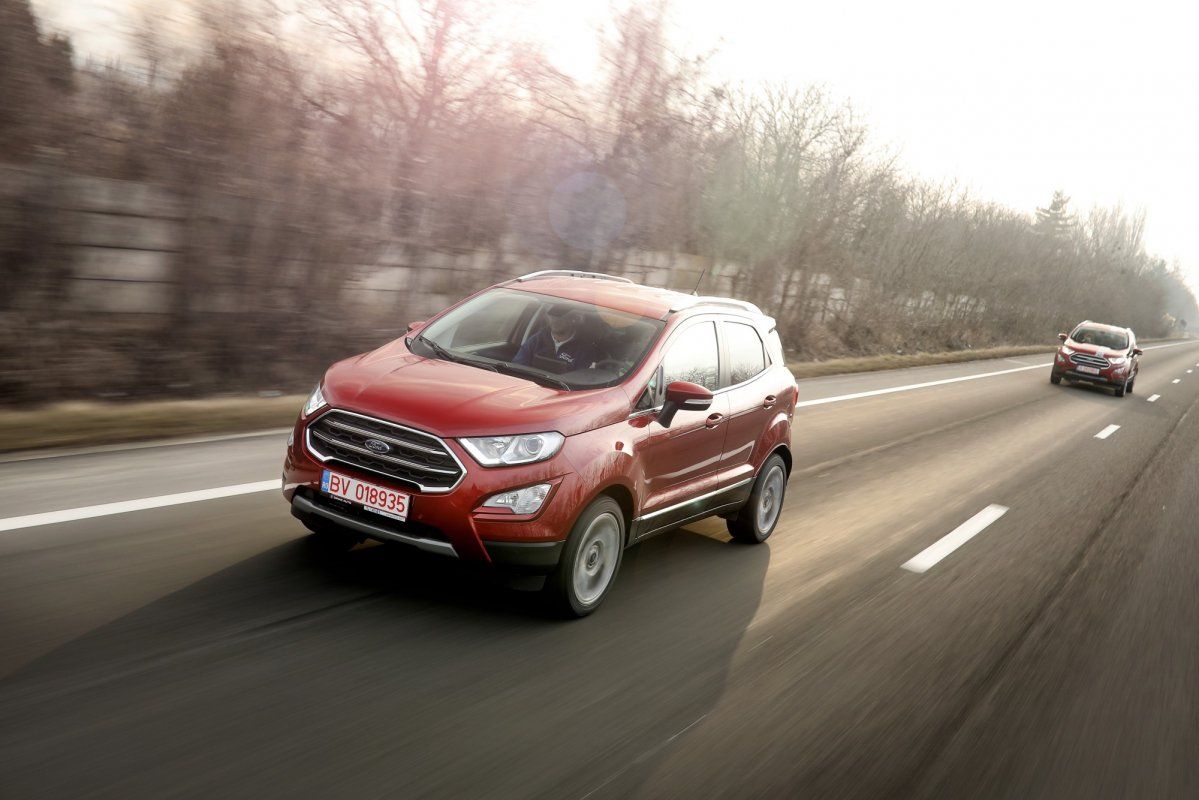 If you are expecting a Fiesta on stilts sort of handling from the EcoSport you're not far from the truth. The EcoSport feels at home on the bends, even if the high-seating position is not very inspiring.
The alterations Ford made to the chassis have improved the handling, but still, the EcoSport is trailing the class leaders. Seat Arona and Mazda MX-3 are superior when it comes to ride and handling.
Lateral roll is present because of the tall and narrow body but it's well contained. Steering is quick and feels connected with decent amounts of feedback. The 2013 Ford EcoSport was tested by the EuroNCAP and it achieved a four-star rating. The adult passenger score was a good 93 percent. The new 2018 EcoSport has yet to be tested and should score an even better result. Until then, Ford EcoSport has all the safety systems required including a full set of airbags, side airbags and a knee airbag for the driver. 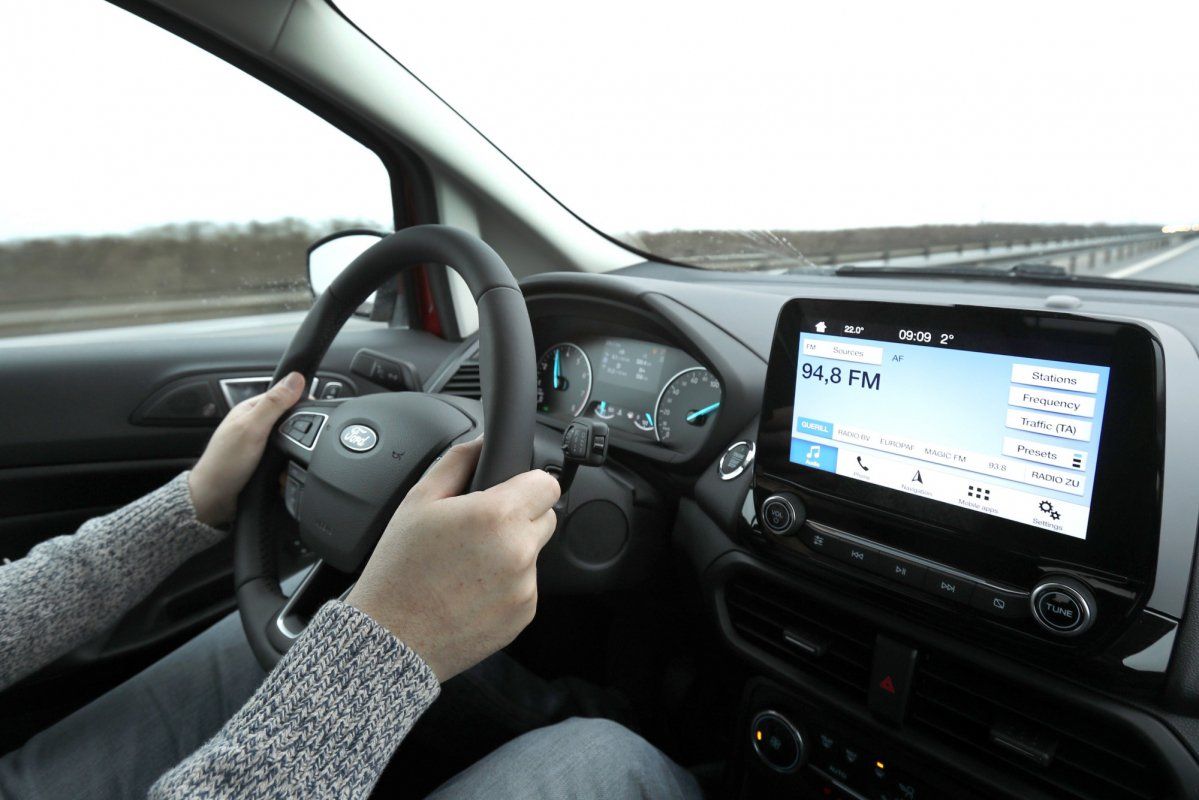 While the ST-Line 140 hp version rides on 17-inch wheels, the Titanium 125 hp does better with 16-inch rims. The smaller wheels improve the comfort for the passengers, coping better with uneven surfaces.
Not the best seats in the EcoSport, though. The seating position is high, while the seat cushion is too narrow. In the back, knee room is a problem if the driver is a tall person. 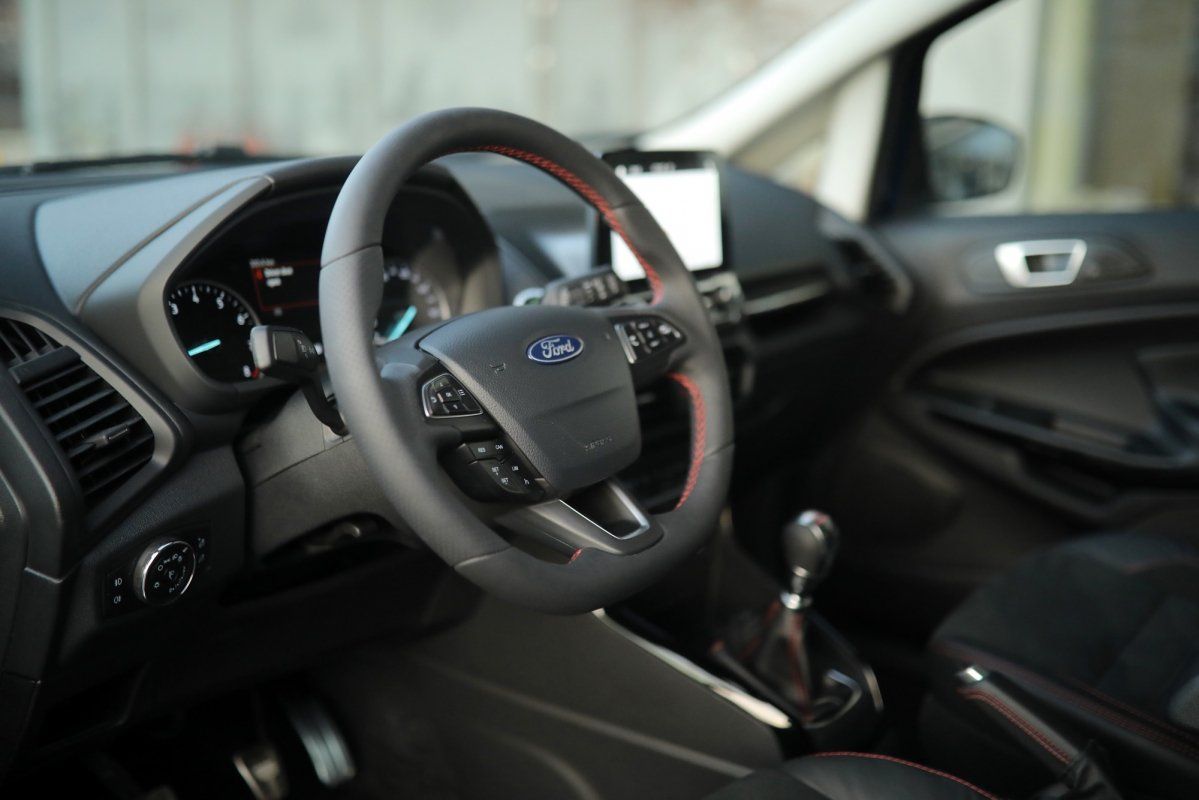 The interior quality is a big step forward from the previous version of the EcoSport. If before it used elements from the sixth generation Fiesta, know it has all the bells and whistles for the latest seventh generation Fiesta. This means softer plastics, leather covered steering wheel, even Alcantara for the ST-Line version. Ford improved the sound insulation of the interior, but at highway speeds, wind noise is still an issue. 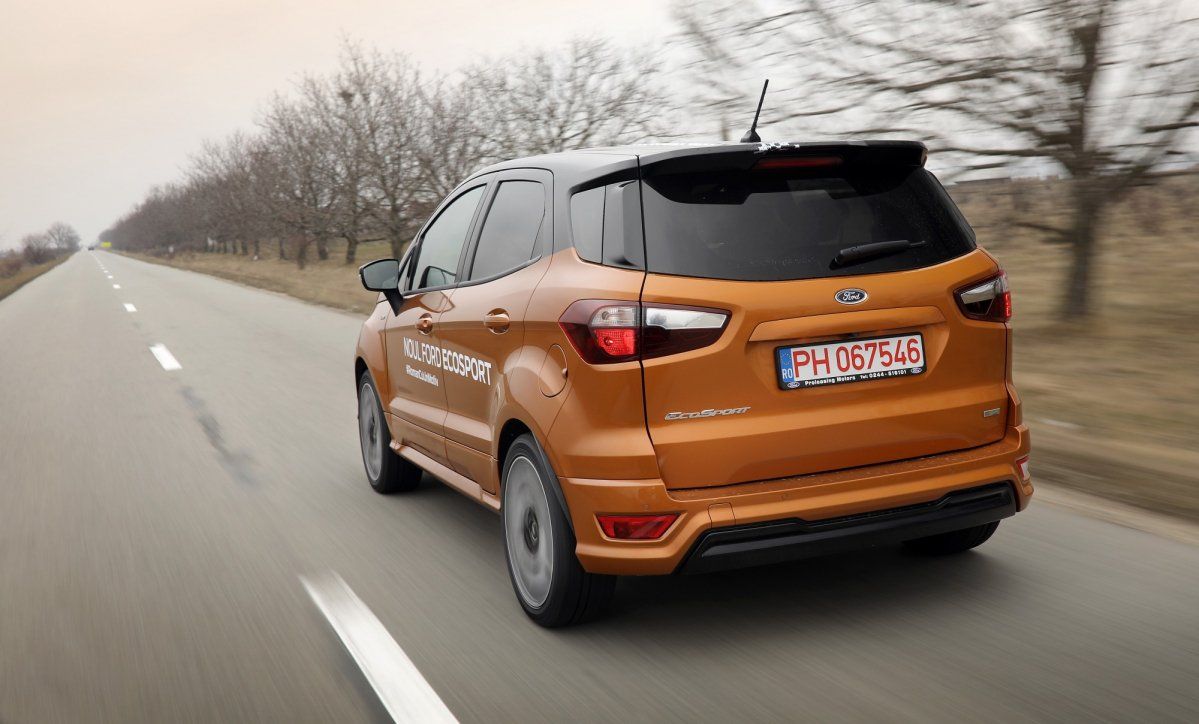 Well, for a B-segment SUV, the EcoSport offers a sub-par trunk with only 355 liters. Seat's Arona has a 400 liter luggage space. Also, EcoSport does not offer a spare wheel. It has a repair kit, and if you want a spare wheel, then you have to accept the optional wheel cowling on the fifth door. Cargo area door that is still hinged to the side. By the way, the door release is hidden in the right tail light. 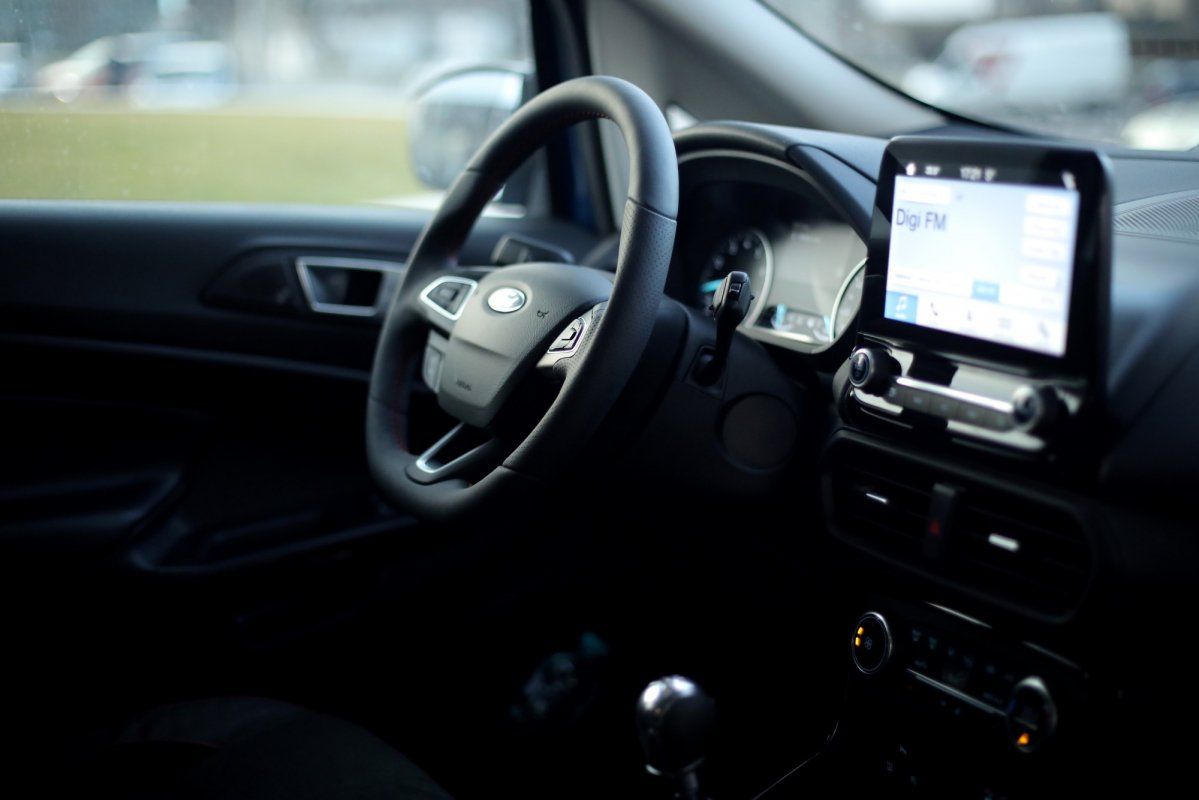 The new Ford EcoSport offers the Sync 3 infotainment system and the 8-inch touch display in the middle console. Smaller 6.5 and 4.2-inch displays are available for the lower spec versions.
Ford now offers a top of the range ten-speaker sound system from B&O Play for the ST-Line and Titanium trims. It delivers optimum sound quality for the music lover. Apple Car Play is also present and the display will mirror the screen of your iPhone when you plug the smartphone. 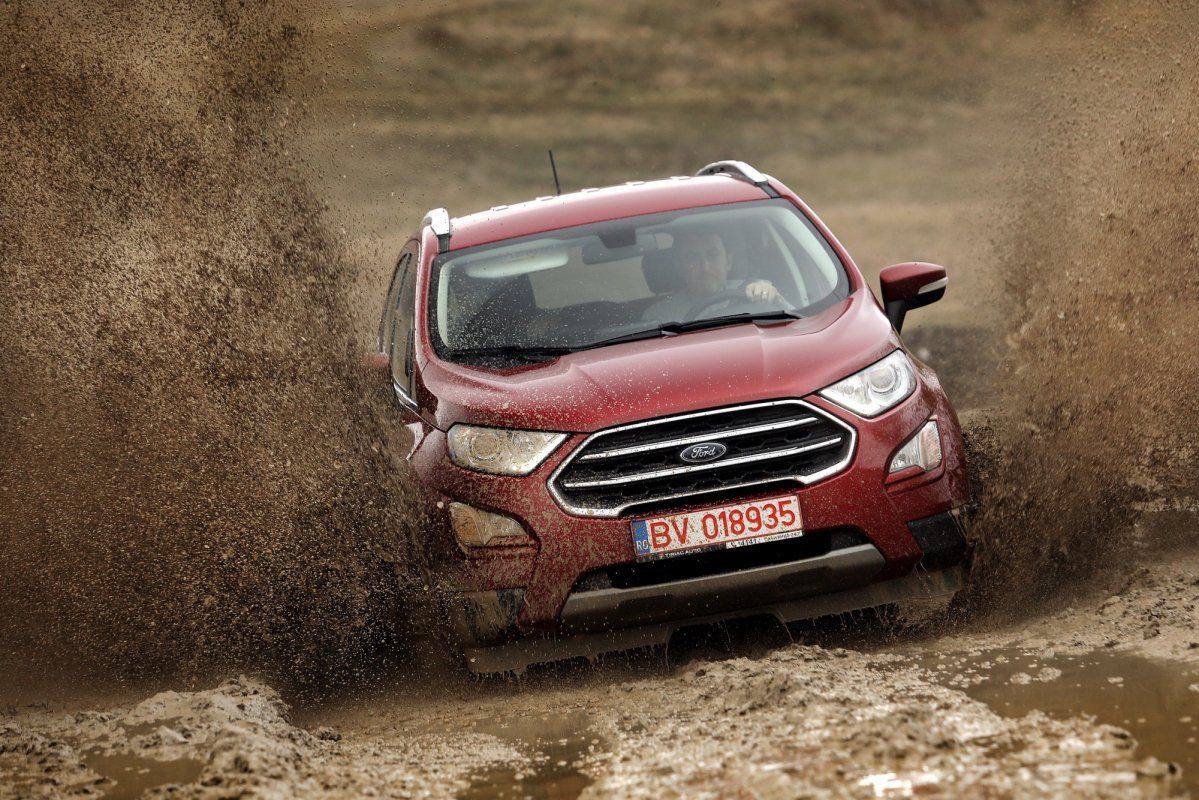 The 1.0-liter Ecoboost engine is an enjoyable small motor and does not fail in terms of fuel consumptions. The manufacturer claims a fuel economy of 5.2 l/100 km. In the real world, the front-wheel drive version delivers a fuel economy of 8 l/100 km. This figure was achieved with three adult passengers and a full load of luggage in the trunk. 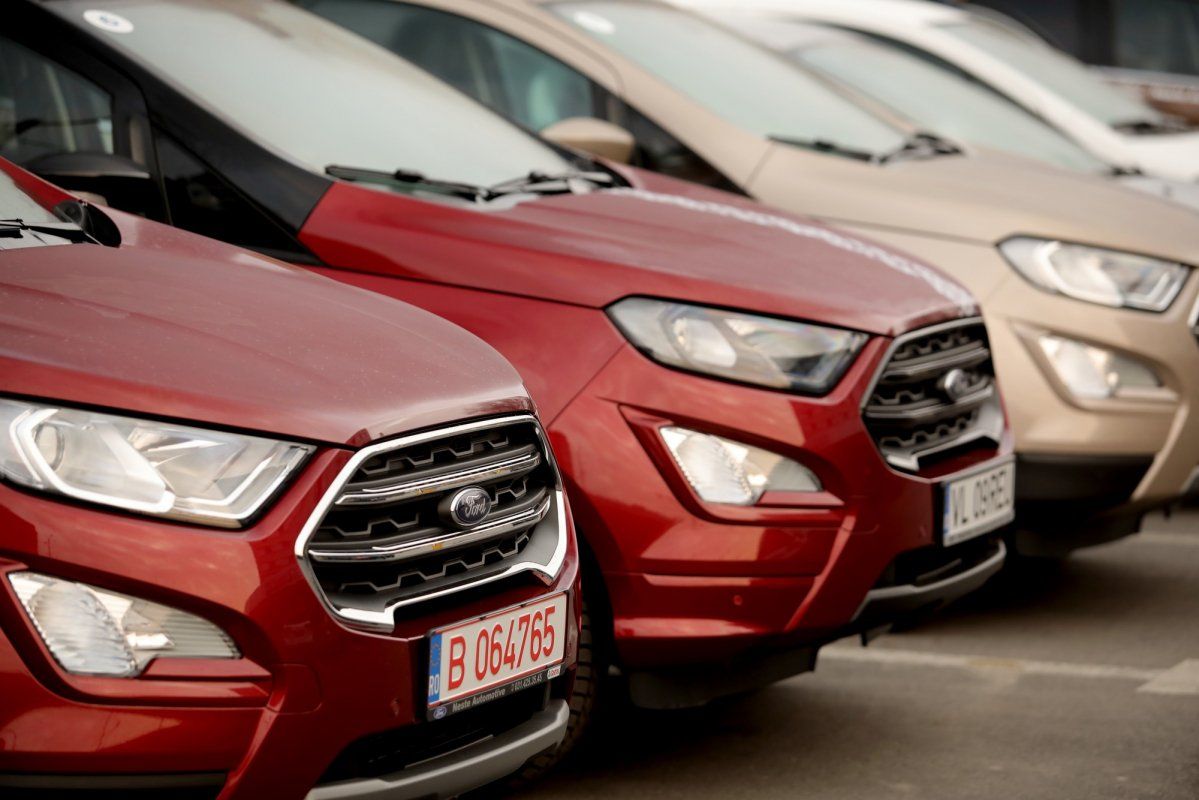 If the most desirable version is the ST-Line trim, the Titanium spec for the European market is also worthy of attention. You can get the two-tone color scheme that will make the EcoSport stand out. Inside, the Sync 3 infotainment system is the main attraction. The 8-inch touchscreen was taken from the new Fiesta and offers Apple Car Play, Bluetooth and a modern graphic interface.
Optional, you can choose the 10-speaker B&O Play audio system. 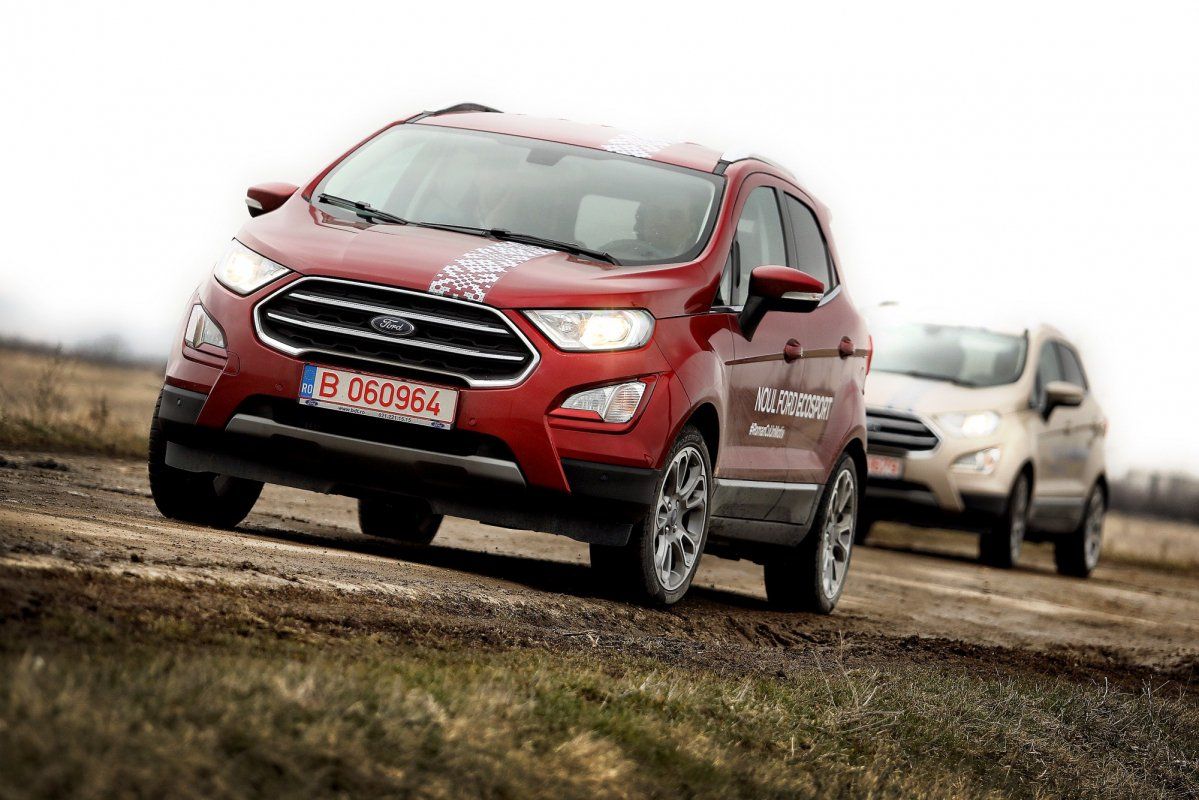 The new Ford EcoSport is ready to tackle the tough European market, but the competition is fierce in the SUV B-segment. EcoSport will go face to face with models like the Opel Crossland X, Renault Captur, Kia Stonic, Peugeot 2008, Mazda CX-3, Nissan Juke and Honda HR-V.
The new EcoSport is built in Romania, instead of India, and it feels like different vehicle compared with the first version. It will be a big hit on markets like Italy, where they love small SUVs.
Prices in Europe start just below the 20.000 euro mark. A top-specced Ford EcoSport ST-Line will set you back around 23.000 euro.