Is the V-Class' sumptuous character enough to make you forget you're buying a van? We took it for a spin to find out

A V-Class in its prime guise is a revealing experience. It's like meeting that construction worker again (previously seen wearing overalls, and a white safety helmet on his head) only this time he's at a gala, sporting a black tie attire, talking about fine cuisine, art collections, and history. He's an engineer, actually. The white helmet should have been a hint if the constructions universe color codes would've been followed.

A V-Class as a gala participant is so different from the overall-wearing Vito that you'll hardly say the two sit on the same platform. In terms of craftsmanship, the V is clearly Mercedes' most telling example. Comparing it with the mighty S-Class might sound stupid but it's not as big of a stretch as you'd think. To a certain extent, this lounge of a car is an S-Class alternative for those for whom space is an important criterion, if not the most. There is not much to choose between when it comes to the V-Class’ powertrains. There’s only one engine available, a 2.1-liter diesel in three different power states: with 134 hp (136 PS), 161 hp (163 PS), and 188 hp (190 PS). Some might miss the V6 lump which has not been carried over from the Viano, but they shouldn’t: the V250 is faster and more economical than the six-cylinder diesel.

In our tester, the 188-hp four-pot is mated to a seven-speed automatic and features the all-wheel-drive 4MATIC system, two very welcome additions in terms of comfort and road handling. 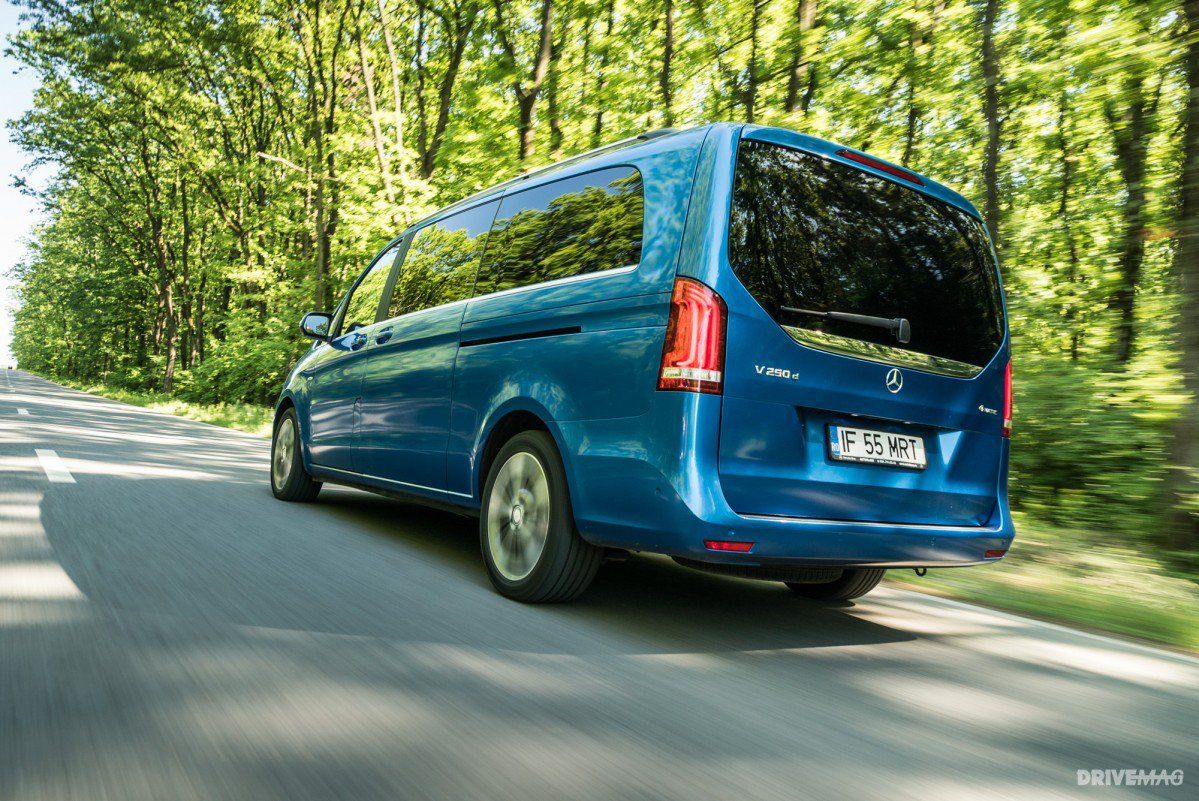 The height from which you’re operating this vehicle is a constant reminder of its nature but also an edge when it comes to comfort. The V-Class behaves decently on the road, partly thanks to its adaptive damping system that reduces the body roll. Despite the brushed aluminum paddle shifters on the steering column, this car is by no means created to go fast, and the steering wheel is another telling sign of that. 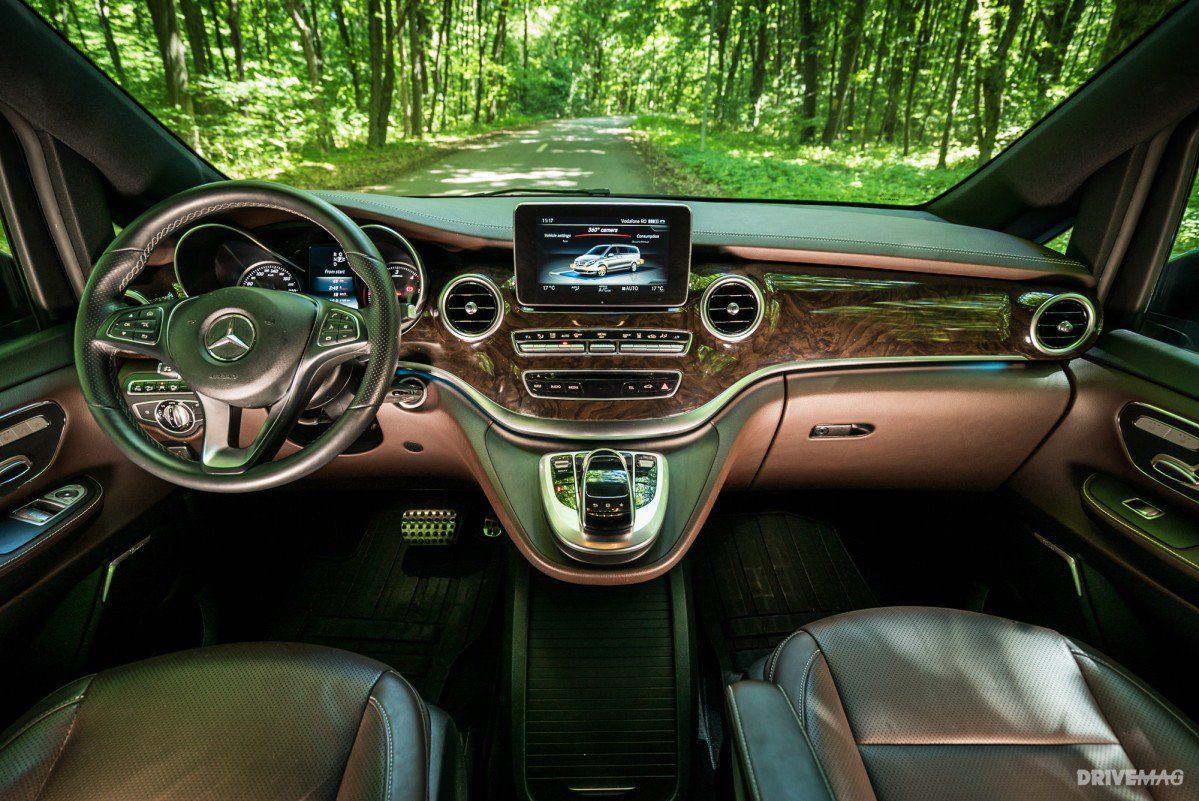 You get a plethora of airbags as standard but there are a lot of extras you’d be better off with, like the parking assistant with a 360-degree camera system, or at least the rear parking sensors. As for the driving part, the V-Class can come equipped with a lot of safety systems available on the Mercedes cars, such as Pre-Safe, Blind Spot Monitor and Lane Keeping Assist — the latter gives you a haptic warning through the steering wheel when you stray away from you driving line.

There’s also Mercedes’ adaptive cruise control Distronic Plus that'll bring the car to a stop if the followed vehicle does so. The car’s Start-Stop system can, however, interfere with the Distronic Plus, so after every full stop, you’ll have to pinch the throttle pedal to restore the car’s motion. 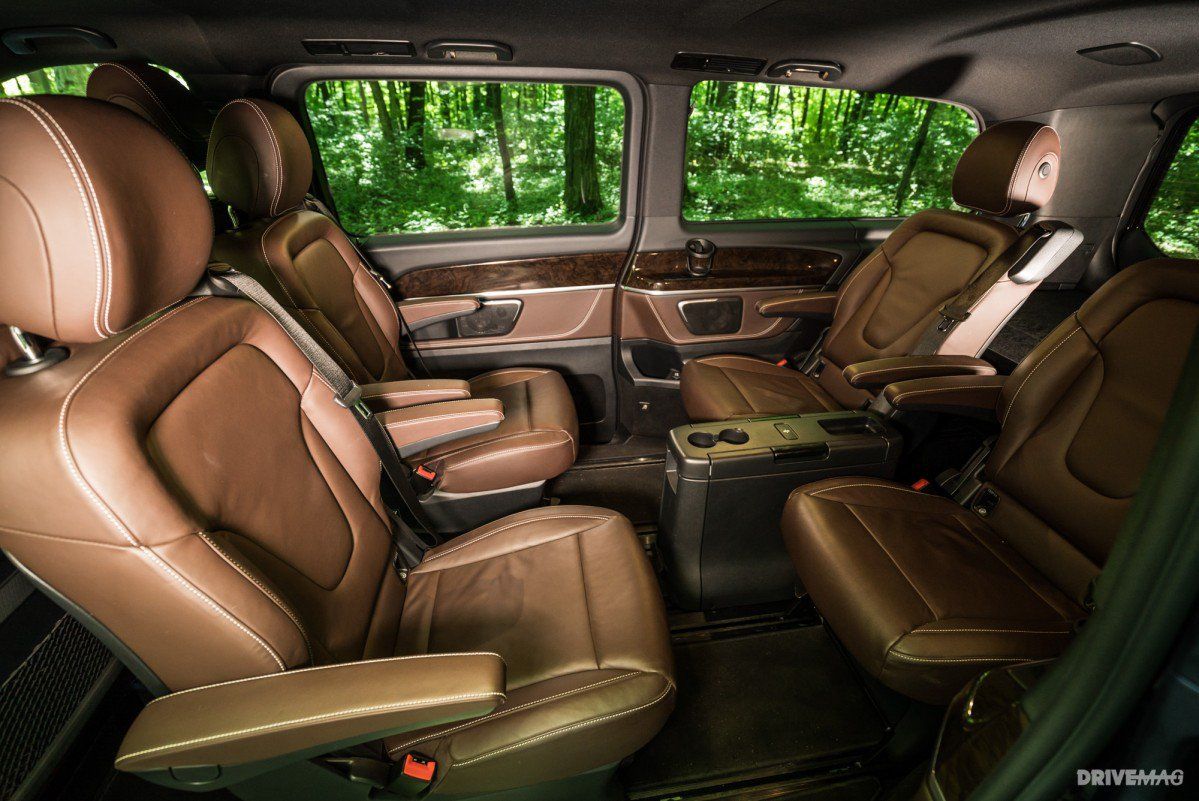 Despite not having a refined petrol engine under its bonnet, the V-Class does not disappoint passengers with clattery noises, or any noise for that matter — the sign of excellent soundproofing. If you're traveling alone, with the stereo turned off, you'll probably hear the car's chassis torsion, but just remind yourself you're in a van, basically, and you'll realize just how much better this large car insulates you from the outside world.

The only feature the seat lacks is a massage function — that would have made things virtually perfect. Otherwise, the ergonomics of the car's seats is good enough to diminish a long, long ride's fatigue. Here’s where the V shows its class as a true Mercedes-Benz product: depending on what trim you choose, you can have yourself engulfed in exquisite leather, fine wood inserts, and a general joie de vivre appearance. Upfront you’ll hardly find an unsatisfactory bit in terms of haptic experiences.

And, depending on how much you're willing to spend on a super-van-lounge, materials quality in the back can be on par with the one in the cockpit — with Nappa leather-upholstered, heated and ventilated seats, and wood inserts on the rear door panels. Even in its shortest, 4.9-meter long version, there’s enough room for up to eight passengers, although opting for the three seat rows in the back would make the V resemble a bus rather than a premium shuttle.

Our tester, the 5.3-meter Extra Long version, featured two pairs of individual seats facing each other, and a foldable table in the middle, creating the roomiest mobile office I’ve ever experienced; the bounciest one also, but this is not the car’s fault.

As with the three-seat bench, the individual seats are to be operated manually, and finding the fasteners might not be as easy as previously thought, at least in my case. Also, they’re not necessarily lightweight. The V uses the tablet-like Comand Online infotainment system also found on the C-Class — with the curved arm above the rotary switch being a touchpad, so you can skip to the next track (or navigate through the menu) just by swiping right. Additionally, you can access various features just by talking, as Comand Online comes with a voice control feature also. From a visual point of view, the graphics are a bit outdated (in comparison with the new S-, and E-Class) but overall they're not annoying, and have a decent response time.

Speaking of music, Mercedes highlights the V’s classy character by stuffing a 640 W 16-speaker Burmeister audio. It's a €950 extra (standard on the Exclusive trim) that deserves every penny. Mercedes restricts the V’s engine line-up to the 2.1-liter four-cylinder, boasting impressive fuel consumption figures: the 250d 4MATIC can get you as far as 39 mpg (6.0 l/100 km); only, of course, it won’t.

These numbers, as we all know, are ideal, unlike the real life situations. So you’ll have to settle with around 21 mpg (11 l/100 km), as we did during our test drive session both in and out of the city. For the record, I didn’t even use the paddle shifters; or the Sport mode. There are A LOT of items on the equipment list, from the space-configuring, practical ones (like a central console with refrigerator compartment, or the folding table) to comfort-related amenities (such as sliding rear doors) and the visually enhancing ornaments.

The three trims (entry-level, Avantgarde, and Exclusive) are very well defined and, despite the steep price they're asking, the latter two are satisfactorily comprehensive regarding what they offer. The V-Class' main rival is the Volkswagen Multivan — which has a bunch of visual customizations and can be configured to look just like the much-beloved T2; nostalgic touches are a plus in our book.

At a first glance, the V looks more expensive than the VW, but that's since the Multivan doesn't have as much equipment included in a trim's price as Mercedes' posh van. It's quite the opposite, but that doesn't mean the V-Class comes cheap, especially in the higher trims. Yet, through the luxury and the amenities it offers, it makes you feel it deserves every penny.