The Mercedes-Benz C-Class has come a long way since the launch of the original model in 1993. Back then, the C-Class was the cheapest entry ticket to the world of Mercedes-Benz luxury, but the fourth generation model is now a mini S-Class in its own right - and not just from the (very) obvious design point of view. Nowadays, one can spec the C-Class to ridiculous levels of luxury: it’s even available with the Airmatic suspension which gives passengers a silky smooth ride. It all depends on how much money the owner is willing to spend on optional extras, really. The model we drove was an European-spec C200 4Matic (not available in the United States), which didn’t have the Airmatic suspension. We can’t say we missed it though, as the standard Agility Control chassis with adaptive dampers does a great job of isolating occupants from road irregularities. 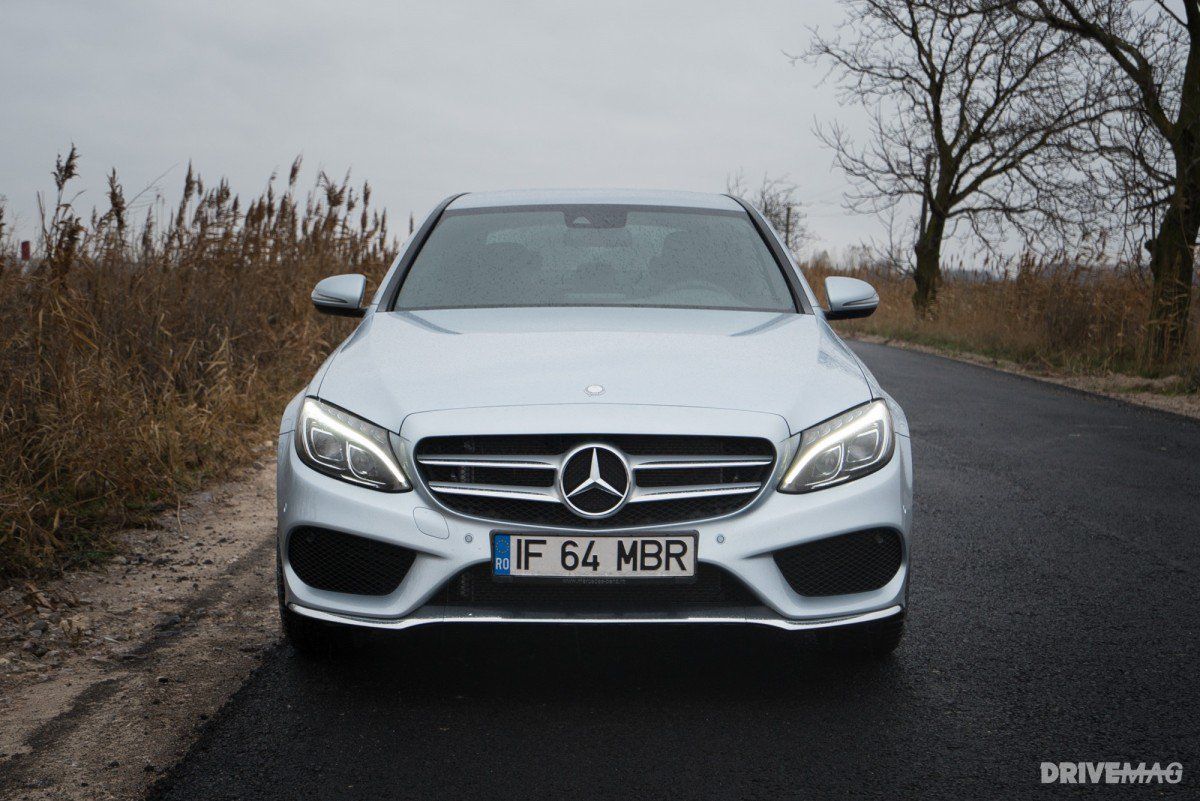 The engine doesn’t sound enticing at low speeds, but delivers a sporty sound and feel beyond 4,000 rpm. However, if you like sporty driving you’ll be definitely annoyed by the lack of a full-on manual mode of the transmission. And we’d recommend going for the more powerful C 250 which squeezes 211 PS (208 hp) from the same engine. 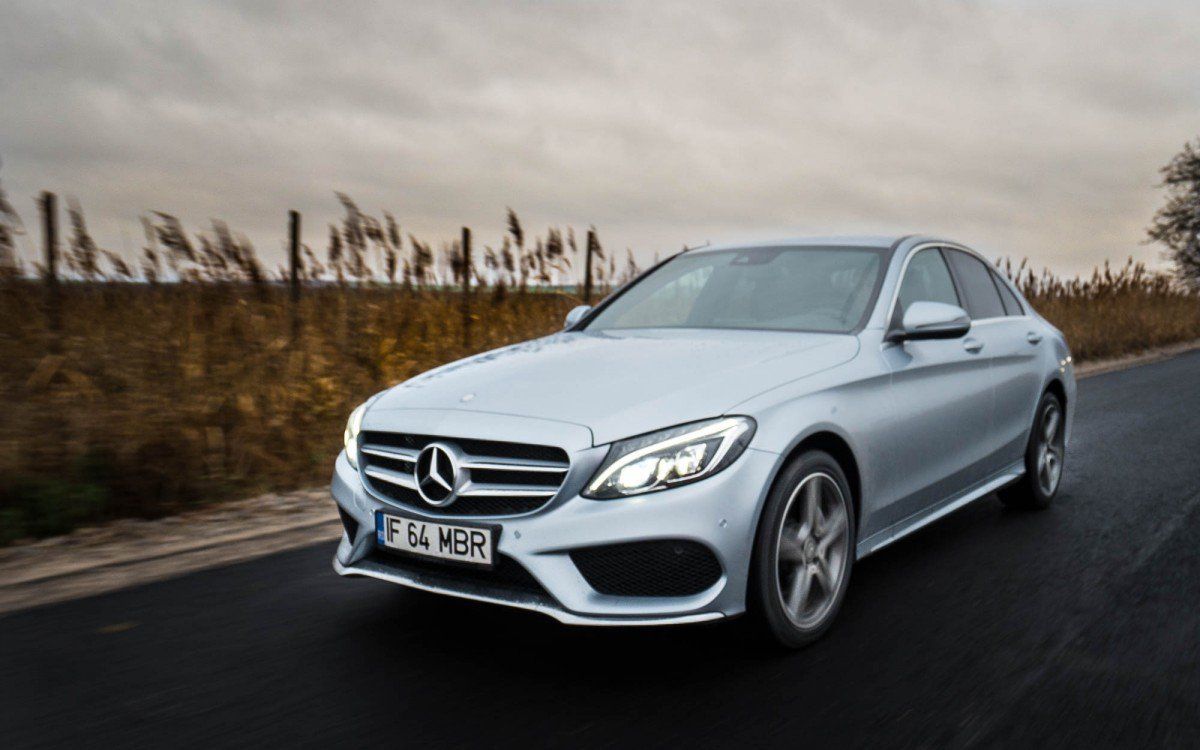 As we’ve already mentioned, the car we reviewed came with the standard Agility Control suspension. It clearly is a comfort-oriented spring/damper system (not that there’s anything wrong with it), which also offers selective damping. There are three modes that alter the suspension’s response: Comfort, Sport and Sport+.
We’ve driven the C200 4Matic on various types of roads (including gravel), and in Comfort mode the ride was as refined as a one could hope for from a car in this class. Sport and Sport+ modes sharpen the throttle, stiffen the dampers and add weight to the otherwise rather vague steering, with the result being improved roadholding, particularly in corners. However, at no point the ride seems harsh. 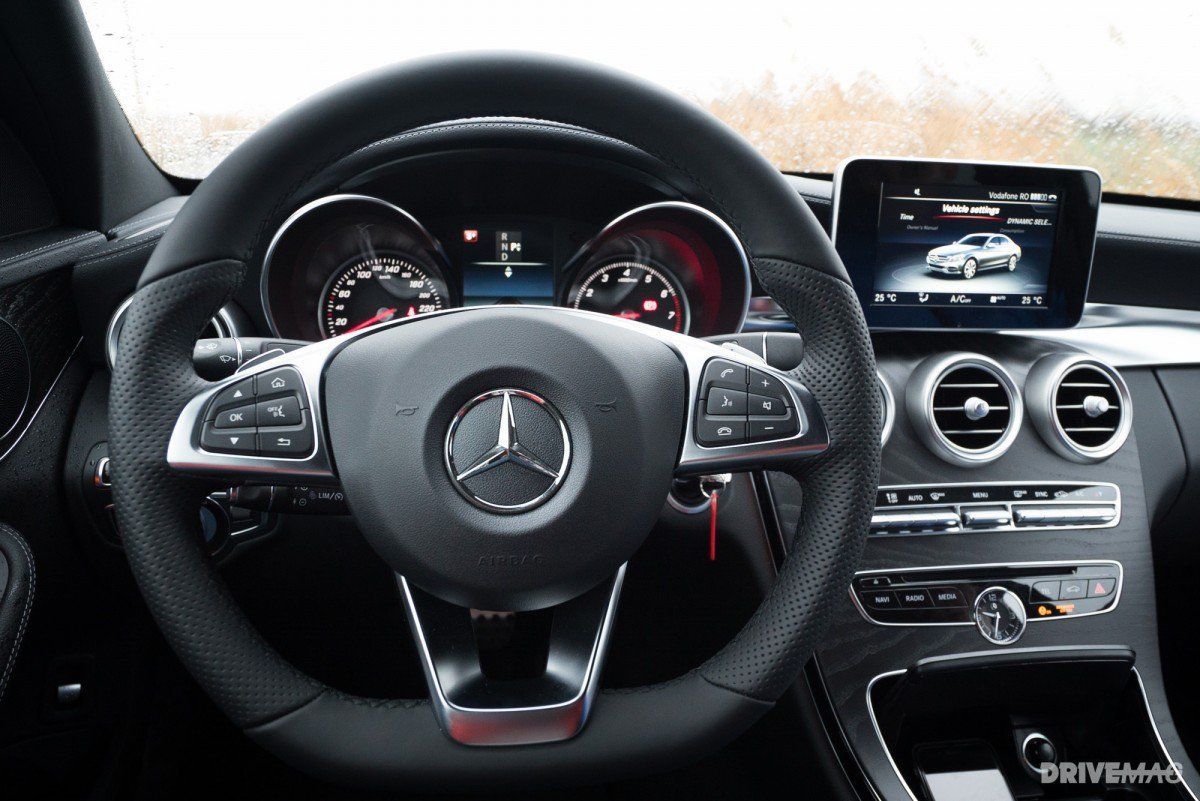 As one would expect from an established premium sedan, the C-Class offers remarkable levels of passive safety. EuroNCAP crash tested it in 2014 and gave it five stars overall and the “Best in Class” label, while IIHS gave it “Good” ratings for moderate overlap front impact and side impact, as well as a “Superior” rating for front crash prevention. The only “Acceptable” rating was given for the ease of use of child seat anchors. 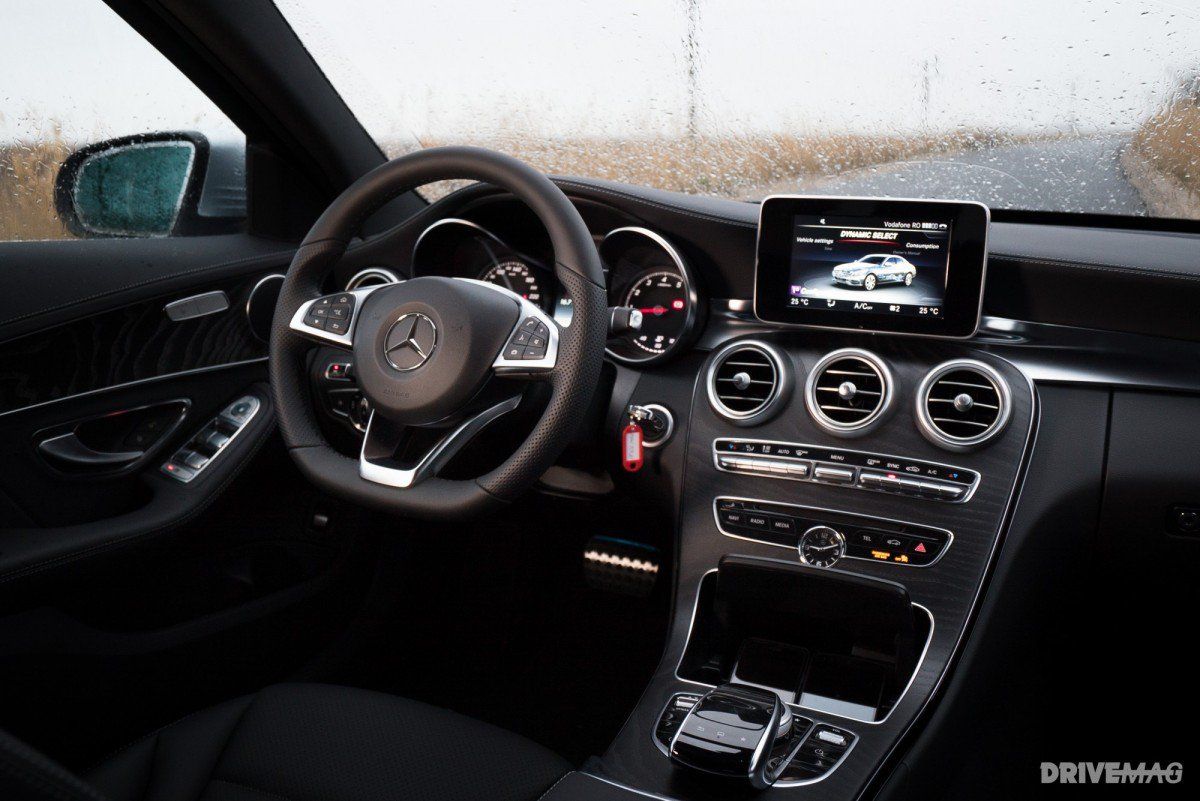 If we had to choose one word for what it’s like to be inside the Mercedes-Benz C200 4Matic, “relaxation” is definitely the best choice. The cabin is a nice place to be in: the seats are comfortable, the driving position is spot on and the controls are where they are supposed to be (for a Mercedes-Benz customer, at least).

However, a driver who’s new to the brand will need some time to adapt to the transmission lever located on the steering column or the switch for the windscreen wipers placed on the left side of the column. 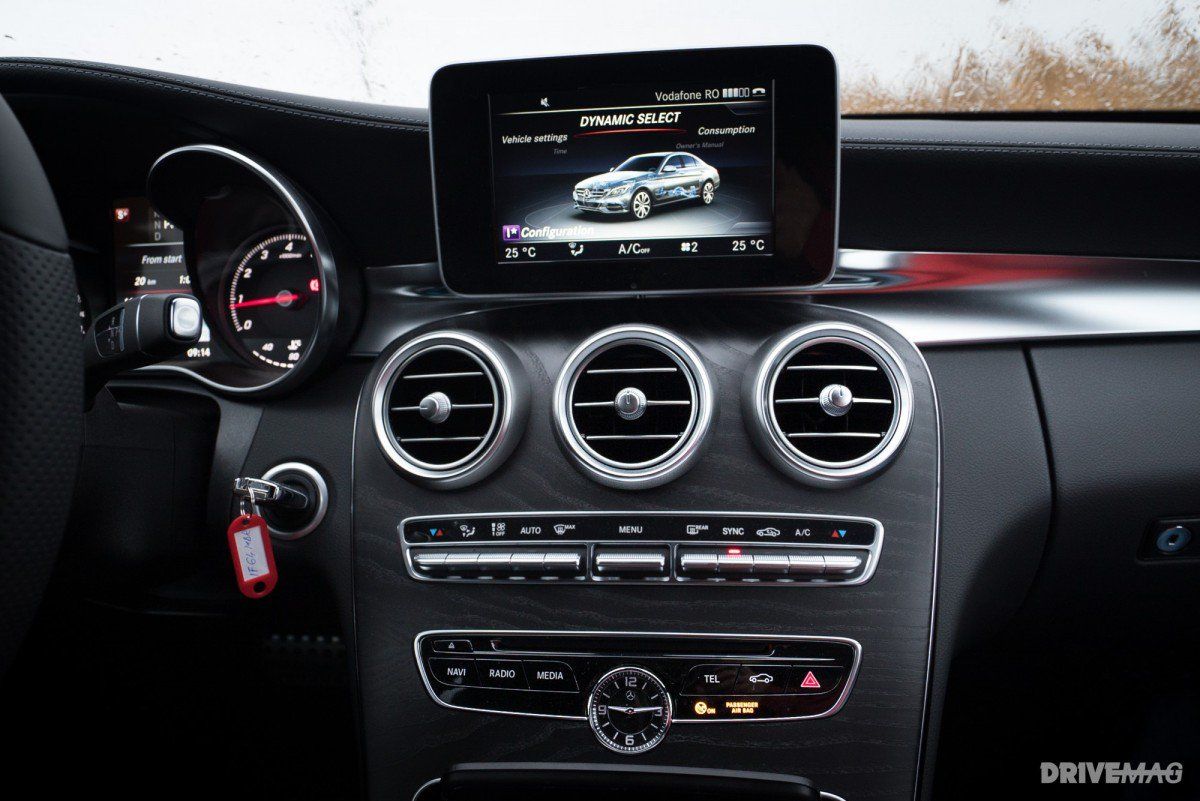 From assembly to materials, the quality of the C200 4Matic is marvelous. Everything the driver touches feels upscale, from the touchpad and rotary controller of the Comand infotainment system, to the shift paddles and the leather-wrapped steering wheel. There are no thumps whatsoever from the suspension, nor any other unwanted noises. Put it in Comfort mode and the C-Class is very quiet and comfortable, which for most people is what luxury is all about.

Of course, you may have a bit more fun behind the wheel of a BMW 3-Series, but the Merc has the edge when it comes to refinement. Comfort tip: for an even plusher ride, don’t cross the option box for the 18-inch AMG wheels. 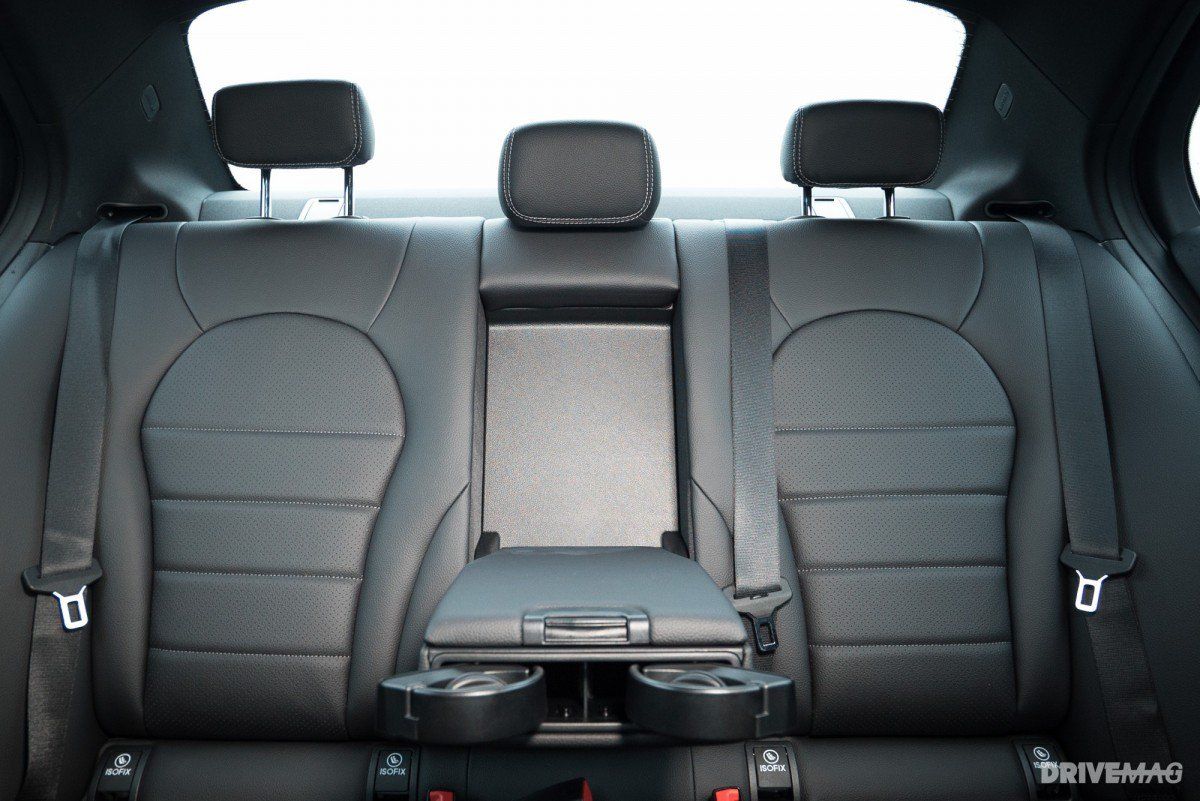 The fourth-generation Mercedes-Benz C-Class is 95 mm (3.74 in) longer and 40 mm (1.57 in) wider than its predecessor and passenger. More importantly, the wheelbase has grown by 80 mm (3.15 in), with passengers benefit from the increase. At the front, there’s plenty of legroom and headroom, and the visibility is good. Legroom and headroom at the rear are similar to what the BMW 3-Series and Audi A4 offer, while boot volume is a decent 480 liters (16.9 cu-ft).

The large rear doors make access to the back row of seats easier, while storage spaces are plenty. There’s one notable exception, however: the car we drove didn’t have cupholders for front passengers. Strangely, cupholders are a €103.05 option in Germany. 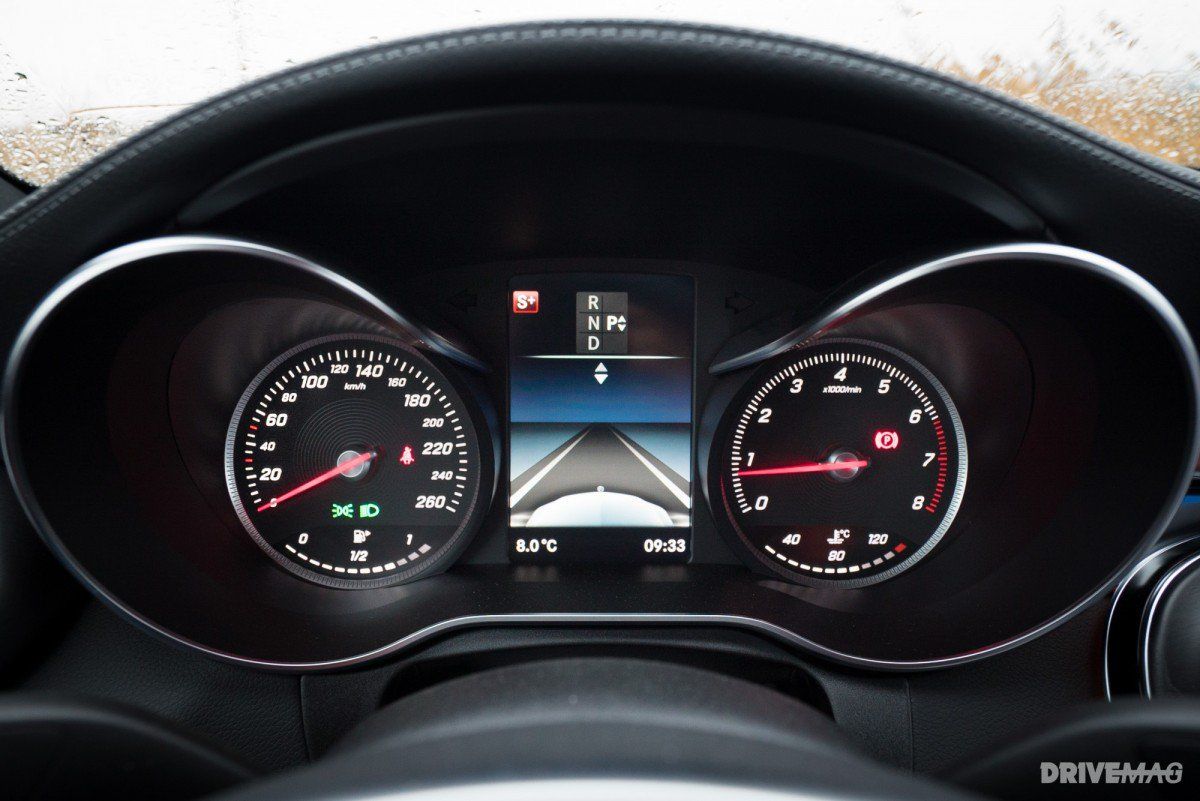 The C-Class comes with the latest generation Comand infotainment system which in Audio 20 CD USB guise pairs a 7-inch TFT color display positioned above the center console with a rotary controller on the center tunnel and a touchpad. Essential commands are doubled by buttons on the center console, so you don’t have to browse through the menu if you don’t want to.

That’s probably because the folks at Mercedes-Benz were aware that Comand’s on-screen tabs aren’t as intuitive to access the menus from BMW’s iDrive or Audi’s MMI. The basic sound system is impressive and standard Bluetooth means pairing your phone to the car is as simple as it should be. 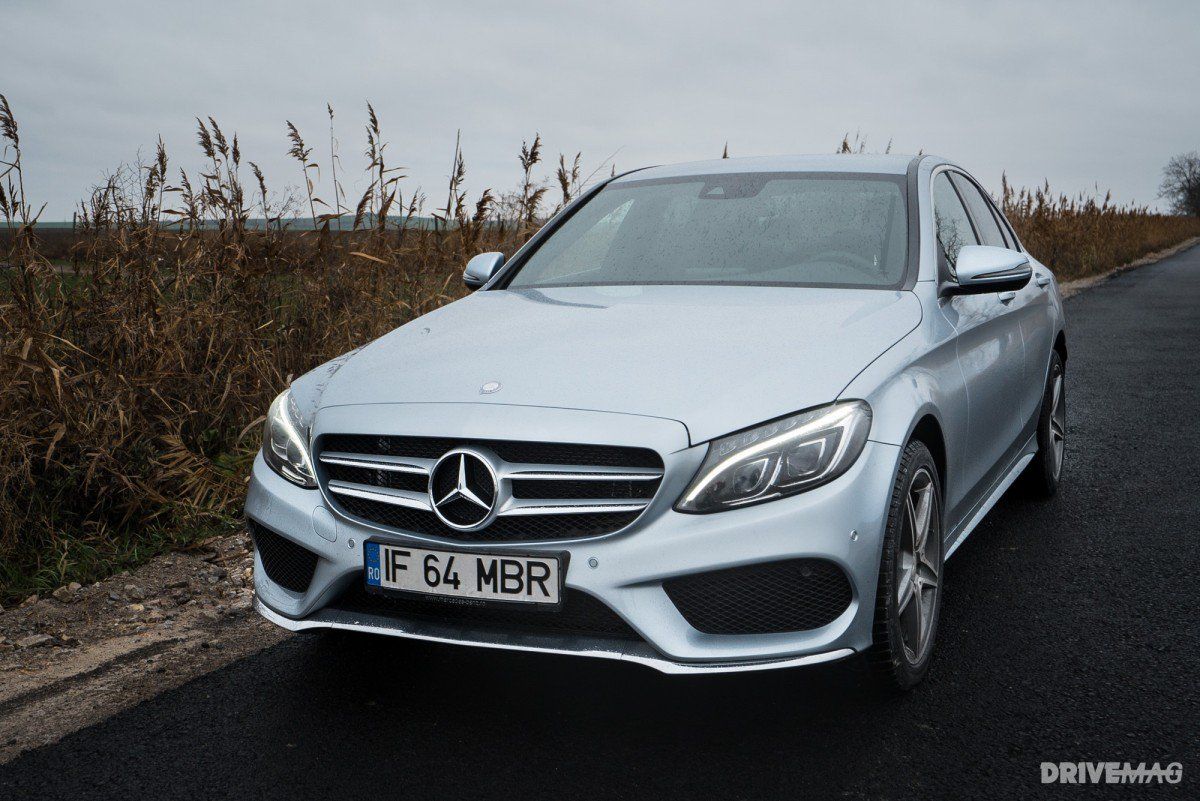 After driving around 1,000 kilometers (621 miles) on the highway, single lane country roads and in the city, the car’s onboard computer showed an average of 12 l/100 km (19.6 mpg US) - which seems excessive, even for a brand new car driven quite hard. You can always go for a diesel, though.

In addition to these features, the car we tested was specced quite generously, with optional equipment including AMG exterior and interior packs, Business Edition pack (7G-Tronic Plus transmission, Audio 20 CD, rain-sensing wipers, heated front seats and split fold-down rear seat backs). There was also a parking package which included a rearview camera and a parking assist system with Parktronic.

So be careful with the options, because you can easily add 50 percent to the starting price of the car.