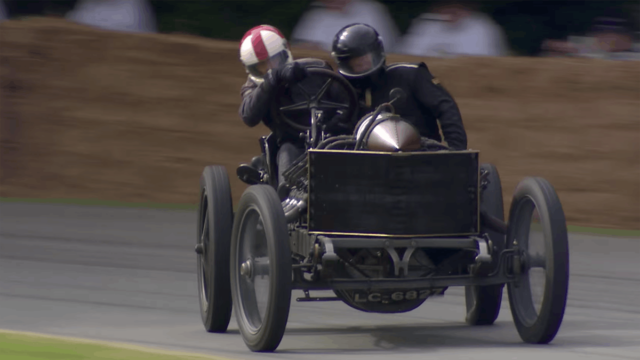 Darracq was a French automaker which by 1936 was already out of business, but in a little over 30 years it had managed to leave its mark on the industry. One such mark was the fantastic 1905 Darracq Sprint 200 HP land speed record car, more commonly referred to simply by its power output.

Back in 1905, it managed to reach a top speed of 122 mph or 196 km/h, helped by its minimalist no-body or superfluous features philosophy. No, really, this isn’t so much a land speed record car but more of an early 20th century Ariel Atom – bear with me.

And the car just seems to handle beautifully, being slid around corners like you would a modern car, then powering down the straights with far more gusto than anything built in 1905 has a right to. You really can lean on it through corners, just throw it around, it seems, and drive it close to its grip limit in what appears to be relative safety.

So while it may have been conceived as a straight line rocket, it’s actually a proper corner carver, a car any petrolhead would I’m sure love to have a go in. I know I get get all worked up every time I see it hooned – it's usually the star wherever it goes.