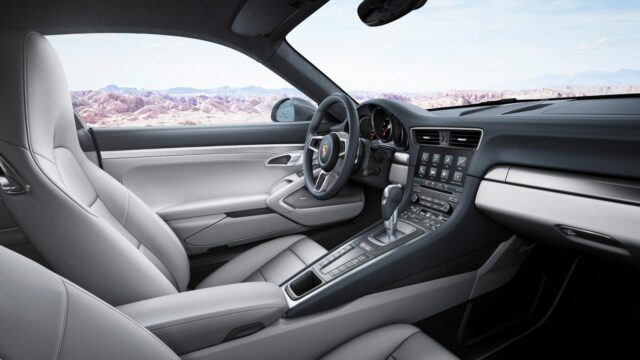 The base Porsche 911 gets a new turbocharged engine for the 2016 model year, ditching the old naturally aspirated one

Gone are the days when you knew the only turbo Porsche 911 was the one that had “Turbo” written on it. Why, you ask? Well, today Porsche unveiled the 2016 Porsche 911 Carrera, which got an engine upgrade, ditching the old 3.4-liter naturally aspirated flat-six for a new 3.0-liter twin-turbo unit delivering 370 horsepower and 331 pound-feet of torque. To put things into perspective, the new engine has 20 hp more than the old one, while the 911 Carrera S, which used to have a 400 hp 3.8-liter unit, now makes 420 horses and 368 lb.-ft. out of the same 3.0-liter turbo flat-six.

Porsche says that the added power makes these the fastest 911 Carrera models ever, touting a time of 7 minutes and 30 seconds for the Carrera S on the famous Nürburgring Nordschleife track in Germany. In other words, it’s 10 seconds quicker than the model it replaces, which is no easy task.

As numbers go, these are certainly impressive: the base Carrera sprints from 0-60 mph in 4.0 seconds when equipped with the optional PDK automatic transmission and the Sport Chrono Package, while the Carrera S needs just 3.7 seconds to hit the 60 mph mark with the same equipment installed.

Design-wise, it’s a bit tricky to spot the new stuff, as always with 911s, but I’ll make life a bit easier and tell you that the updated models got new headlamps with four-point daytime running lights, revised rear lights and a redesigned rear deck lid that now has vertical louvers instead of horizontal ones.

In standard guise, all Carrera variants are now offered with a manual seven-speed transmission and a re-engineered version of Porsche’s Active Suspension Management suite, which lowers the ride height by 10 millimeters. Also new are the wheels with five twin spokes that are equipped with wider tires than before.

As an option, you can order rear-axle steering for the 911 Carrera S, a system that has been adopted from the current 911 Turbo and 911 GT3. Around town, it reduces the turning radius by 1.6 feet, while at higher speeds it enhances the driving precision when changing lanes.

Also available as an option is the Sport Chrono Package, which now comes with a mode switch on the steering wheel, inspired by the hybrid map switch in the 918 Spyder. In the 2016 Porsche 911 Carrera, the switch consists of a rotary dial with four positions for the driving modes: Normal, Sport, Sport Plus and Individual.

Inside, the facelifted Carrera comes with a new version of Porsche’s Communication Management System (PCM), which is available as standard across the range and offers a seven-inch multi-touch display, Apple CarPlay compatibility, and real-time traffic information.