It's astonishing how far technology has come

The Jetta was born when VW realized there were many buyers, especially in the United States, who steered away from the Rabbit (as the Golf Mk1 was known there) because it didn't have the extra cargo space and the style of a three-box sedan. So, in 1979, the automaker launched the Jetta, which was introduced for the 1980 model year in the U.S. and quickly became known as a "Rabbit with a trunk." That's just what it was — a Rabbit turned into a sedan. The Jetta was just what VW needed to make in North America, as it quickly became the best-selling German model on the continent, racking up more than 3.2 million sales since. With the Jetta now in its seventh-generation, VW has decided it would be interesting to compare the latest 2019 model to the 1980 original. Pitting the new Jetta against a 1982 model recently acquired and restored by Volkswagen Group of America reveals the significant technological advances that have taken place over almost four decades as well as the things that haven't changed — such as the name, the three-box body style, and the trunk space. Yes, it may be hard to believe, but the latest and the original Jetta have an identical cargo volume of 14.1 cu ft (the equivalent of 399 liters). That may be where the similarities end, though. The first-generation Jetta offered two-door and four-door sedan body styles, while the latest one can be had as a four-door only. In 1980, the engine was a naturally aspirated 1.6-liter four-cylinder gasoline unit that made just 76 horsepower and 83 lb-ft (112 Nm) of torque. It came with a standard five-speed manual or an optional three-speed auto. Fast-forward to 2018 and the Jetta has roughly twice as much power and torque. The 2019 model's turbocharged 1.4-liter four-cylinder engine is rated at 147 hp and 185 lb-ft (250 Nm) of torque. It comes with a standard six-speed manual or an available eight-speed automatic, and while the 2019 Jetta is obviously much quicker than its predecessor, it's also more economical. Despite being significantly bigger and heavier, it returns 34 mpg on the combined cycle compared to the original Jetta's 21 mpg. There are many differences as far as the equipment is concerned. For example, the only options for the 1980 Jetta were a three-speed automatic transmission, air conditioning, sunroof, tinted glass, and aluminum-alloy wheels.

We don't have the time and space to list all the optional extras offered on the 2019 Jetta, but highlighting some of them should give you an idea of how much VW's compact sedan has evolved technologically in almost forty years. Want to learn more about the differences between the first and the latest Jetta? Check out the following official video from VW. 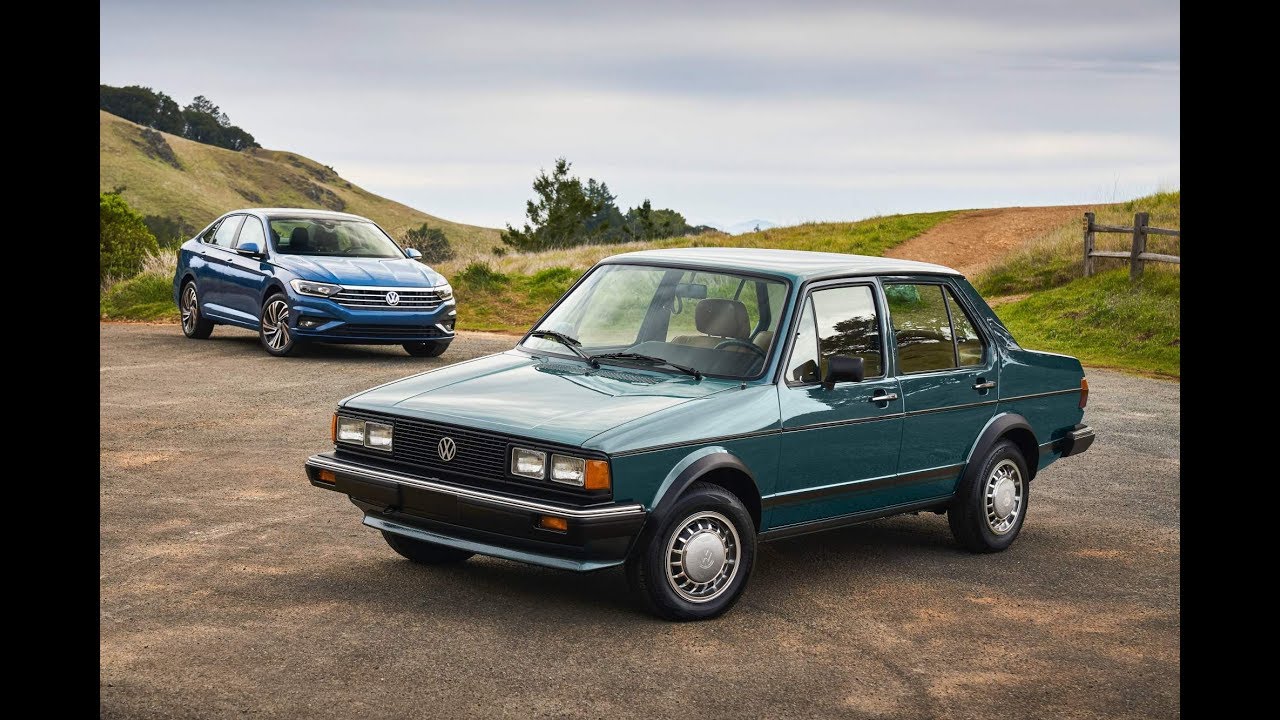