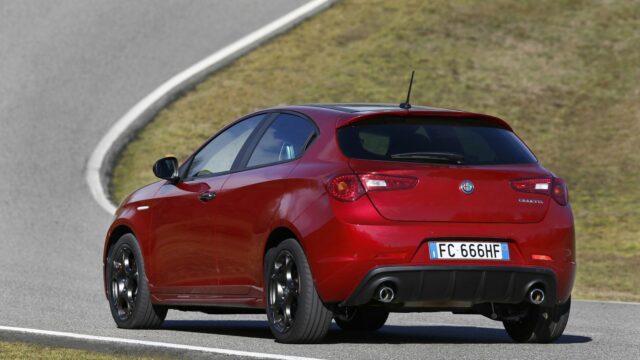 The Italian carmaker applies a light facelift to its stylish hatchback — new trims, a new transmission and engine version are on the list.

There’s been some changes in the Alfa Romeo family, and Giulietta here has just aligned to the new guidelines. First things first: the design. Giulietta adopts a new honeycomb grille and suffers subtle changes to the headlamps and fog lights. Also, the front bumper is augmented by some inserts. As for the cabin, it gets new seat design and matte black dashboard inserts.

Changes are noticed in the trim list too, starting with the names. The seven trim levels are replaced with only five: Giulietta (that’s the entry-level), Super, Tecnica, Speciale, and Veloce.

As standard, you get 16 in wheels, leather steering wheel, air conditioning, and Bluetooth connectivity; the Super comes with cruise control, dual-zone climate control, front fog lights, and upgraded seats — add the Lusso pack and you’ll get sat-nav on a bigger screen (6.5 in).

Tecnica adds front and rear parking sensors and sat-nav as standard, while Speciale stiffens the suspension and beefs up the brakes, while looking sportier (with aggressive exterior details and bigger, 18 in wheels); the cabin gets Alcantara and a flat-bottomed steering wheel.

The Veloce is, as expected, the fast one — besides getting all the Speciale’s improvements, it is thrusted by 4C’s 1750 TB engine, a turbocharged four-pot that delivers 237hp. Yes, the Veloce replaces the Quadrifoglio Verde — as the QV will designate only stupendously powerful versions from now on (the 503 hp Giulia QV already set an example).

The dual-clutch TCT transmission is now available (as an option) for the entry-level diesel also, together with the range topping gasoline and diesel engines.