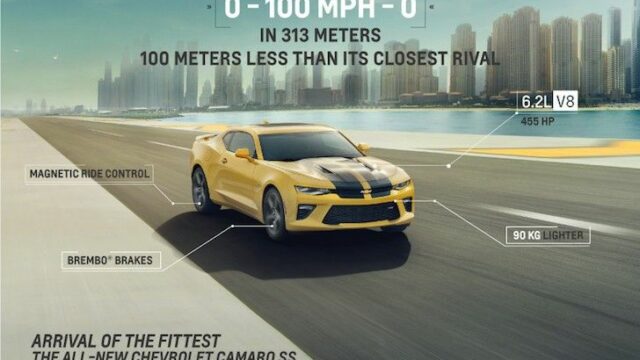 Camaro SS runs on the SkyDrive in Dubai, showing off an impressive 0-100-0.

If you are into modern muscle cars, Chevy Camaro SS has some pretty impressive figures to show you.

Using the 6.2-liter naturally aspirated V8 as its heart, the Camaro SS boasts some 455 hp and 455 lb-ft of torque to the rear wheels, being able to run from zero to 60 mph in four seconds flat. Top speed: a decent 155 mph.

The selling point for the SS would be its weight: it lost some 198 pounds over the outgoing model, tipping the scale at 3,470 lbs now (that's one and a half tonne for Europeans).

And what better way to show this than having a go on SkyDrive Dubai runway, risking to plunge the Camaro SS into the ocean? #iknowright?

We can't tell you how much of this is real, but, considering it is, we can't say but "those Goodyear tires, bro." Its stopping power is indeed impressive.