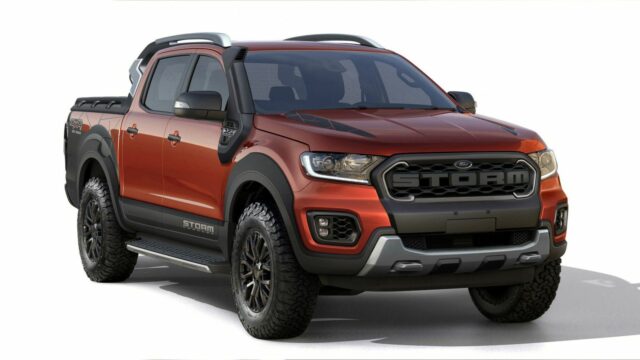 That we’d buy in an instant

Ford’s lineup at the São Paolo Motor Show included the Ranger Storm concept, a mean-looking machine that borrows Ranger Raptor styling cues, but not its grunt.

Carscoops says the Storm concept (by the way, we love the name) is based on the Ranger Limited but gets visual goodies such as a silver skid plate and sporty air intakes and a front grille that says STORM. But we imagine you’ve also noticed that.

On the powertrain front, the Ranger Storm makes use of a 3.2-liter five-cylinder diesel.

Power resides at 197 hp, which is 13 hp less than what the Euro-bound Ranger Raptor makes. It also packs less twist – at 470 Nm of torque, it is 30 Nm behind the Ranger Raptor.

The powerplant resources are routed through a six-speed automatic gearbox and then sent to all four wheels via an all-wheel-drive setup.

As far as we can tell, the Ford Ranger Storm is not going to the US or Europe, but let’s say it would be available on the Old Continent, for example.

Would you have it instead of a full-fledged Raptor?