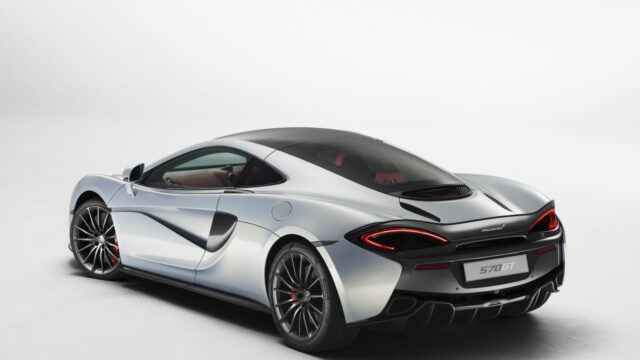 McLaren will debut a new member of its Sports Series family at the 2016 Geneva Motor Show, the 570GT

Based on the 570S, the new version is more luxurious and practical enough for everyday use. That's because it comes with a side-opening rear glass hatch that improves practicality. The glass provides access to 220 liters of storage on the leather-lined Touring Deck, in addition to the frontal storage space of 150 liters. The glass hatch opens on the curb side whether left- or right-hand drive and is framed by carbon fiber.

As the name suggests, the 570GT is oriented more towards long-distance comfort than outright performance, although it packs the same powertrain as the 570S. Fine-tuning to the suspension and steering systems improve comfort during long trips while the bespoke Pirelli P Zero types come with a noise canceling system for a more refined ride.

McLaren describes the 570GT as its most refined and road-biased model yet. Part of this is due to a reduction in spring rate stiffness of 15 percent at the front and 10 percent at the rear.

The 570GT comes equipped with a standard fixed glass Panoramic Roof, which is continued with the large rear glass hatch, creating a bright cabin. Passengers sit on eight-way electrically adjustable sports seats upholstered in leather and control the temperature via an enhanced dual-zone air conditioning system.

Despite the performance, fuel consumption is a remarkable 10.7 l/100 km on the EU combined cycle, with corresponding CO2 emissions of 249 g/km.

While the McLaren 570GT looks rather similar to the 570S, it comes with a slightly different aerodynamic package, including an extended fixed rear spoiler that's 10 mm taller than that fitted to the 570S.