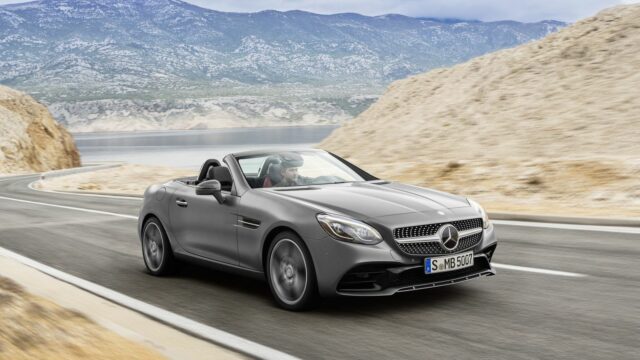 With the new name, the automaker wants to underline the model's close relationship with the C-Class, from which it borrows much of its technology.

From a styling point of view, the 2017 Mercedes-Benz SLC gains a new front end highlighted by a standard diamond radiator grille, refreshed bumper, arrow-shaped bonnet and refreshed headlights optionally available with the LED Intelligent Light System. The rear end gets a new bumper with integrated tailpipes and new graphics for the narrower LED taillights.

The cabin also sees some upgrades, including new light or dark aluminum trim parts with a carbon fiber finish, as well as a new design for the instrument cluster with an integrated 4.5-inch TFT display. Furthermore, the display between the two air vents in the center console has grown from 5.8 inches to 7 inches (in combination with the Audio 20 infotainment system).

Mercedes-Benz has also updated the SLC's electrohydraulic roof that can now be opened or closed at speeds up to 40 km/h and gains an automatic boot separator in combination with the optional extra vario-roof or Keyless-Go.

Surprisingly, the drop in performance is virtually unnoticeable, as the SLC 43 needs 4.7 seconds to accelerate from 0 to 100 km/h, which means it's just 0.1 seconds slower than the SLK 55 AMG. Top speed remains electronically limited to 250 km/h. Predictably, the new engine is more fuel-efficient than its predecessor, averaging 7.8 l/100 km – that's 0.6 l/100 km less, to be exact.

The Mercedes-AMG SLC 43 is available with either the standard sports suspension or the optional AMG Ride Control suspension with adaptive damping and the Handling package with a mechanical limited-slip differential on the rear axle.

The Mercedes-Benz SLC will debut at the 2016 Detroit Auto Show and will be available to order in mid-January 2016 in Europe and spring 2016 in the United States.