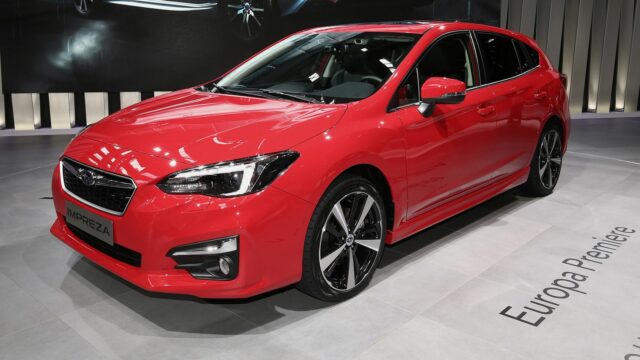 Subaru has unveiled the all-new fifth-gen Impreza before a European crowd at the 2017 Frankfurt motor show over a year after it debuted in North America. The model is the second to use the firm’s new Global Platform that debuted on the XV high-rider, basically a raised version of the Impreza hatch with plastic body caldding.

We therefore already we’ve seen this shape Impreza before and are familiar with it, but Subaru also provided some technical information about the model for us to sink our teeth into.

Both engines will get an updated CVT gearbox – Lineartronic in Subaru speak – which the manufacturer says is the first variable transmission adopted for AWD use. This gearless transmission has also undergone weight shedding over the unit it replaces losing 7.8 kg.

Size-wise, the car is 10 mm lower, 35 mm wider and rides on a 25 mm longer wheelbase; this in turn translates into a larger cabin that’s 29 mm larger at the front, 34 mm at the rear and 26 mm extra legroom for back seat occupants.

Inside, Subaru says the Impreza’s interior “has been designed to make sure the driver is free to focus on the road ahead and enjoy driving the car. The quality of soft touch plastics and finishes have been improved across the interior, without losing the functionality and hard-wearing features.”

Other key points Subaru wishes to point out about the new Impreza are a promised “firm but comfortable” ride, reduced NVH and improved chassis rigidity that translate into “a more dynamic response from the chassis; with the vehicle reacting quickly when the driver steers the vehicle allowing the driver to react quickly to hazards and position the vehicle effectively.”