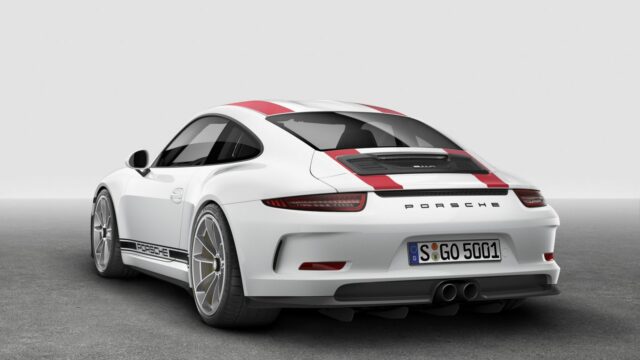 The 911 R makes its appearance in leaked photos. And if you plan on buying one, well, it might be already too late.

Ahead of its Geneva 2016 debut, the 911 R makes its appearance in leaked photos. And if you plan on buying one, well, it might be already too late.

After GT3 RS had shown us what a beastly 911 should look like, Porsche taught about those clients looking for a “back to basic” version. That process leads to what you can see here, in these leaked images: this is the 911 R, a purist’s Porsche.

While keeping the powertrain specs from the GT3 RS (a naturally-aspirated 4.0-liter flat six with 493 hp and 384 lb-ft), the 911 R casts away the dual-clutch PDK transmission for a manual ‘box.

Besides the fancy stripes stretched along the white bodypaint, the 911 also gets weight-saving materials, following its 1960s forwarder.

Although it has the same engine as the brutal GT3 RS — and, presumably, the same 0-to-62 mph in just 3.3 seconds — the 911 R’s modest body kit does not give you any hint of what this car can do.

Porsche claims the 911 R puts the focus on driving pleasure and connection with the driver, rather than brutal behavior and swiftness.

… and I wouldn’t get a chance to find out even if I’d have the money to buy one — most probably it’s already sold out.