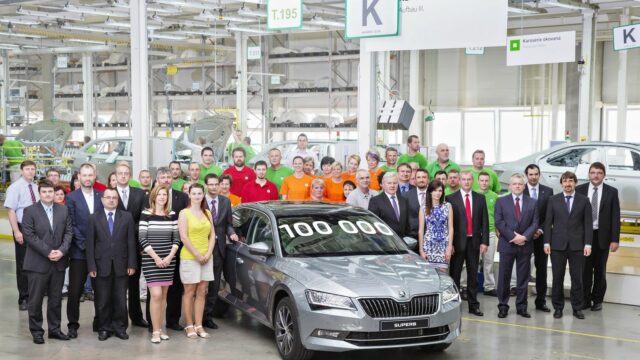 The third-generation Skoda Superb is proving to be a great commercial success for the Czech automaker, which has announced it has already built 100,000 units of its flagship model.

The 100,000th third-generation Superb has rolled off the assembly line of Skoda's Kvasiny plant on May 11, 2016. The factory has been upgraded and has seen its capacity expand to prepare for building Skoda's flagship model and the upcoming SUV.

The third-generation Skoda Superb is more powerful than ever before as well as up to 30 percent more economical thanks to the new EU-6 engines. It's also more sophisticated technologically and offers more space than its predecessor, making it the roomiest vehicle in its class.

The new Skoda Superb has a 30 mm longer wheelbase than the outgoing model as well as a wider track, translating into increased space for all passengers – particularly for those in the rear seats. Skoda says rear legroom is almost double compared to the nearest competitor (157 mm) while headroom is bigger than in any other model in the segment (980 mm).

Cargo volume is 625 liters (22 cu-ft) for the sedan and 660 liters (23.3 cu-ft) in the estate – both are improvements compared to the previous-generation model.