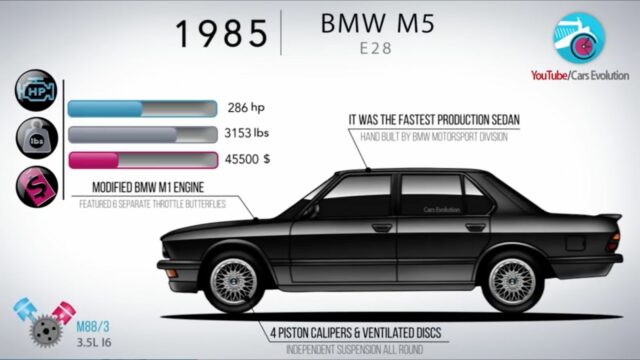 In today’s episode, the guys from Cars Evolution show us how the M5 changed

The BMW M5 is one of the most iconic high-performance cars out there. Virtually every petrolhead in the world dreams of driving and owning one, and for good reason. The M5 is not only famous but also a great driving machine, able to leave in the dust almost any other opponent. It has, virtually, only to worthy rivals – the E-Class AMG and the Audi RS6.

The first generation M5 was based on the E28 5 Series and was launched at the 1984 Amsterdam Motor Show, in February 1984. Under the hood, the first M5 had an engine derived from the one that powered the legendary M1. This made the E28 M5 the fastest production sedan in the world.

Initially, BMW North America announced that there would be only 500 M5s built. When the production continued after the 500 unit mark was achieved, BMW was faced with a lawsuit, that the company settled by giving $4,000 vouchers.

The second M5 was launched in 1988. It was hand-built at BMW M GmbH in Garching, Germany. It was based on the E34 chassis which was produced at BMW's Dingolfing plant. Assembly was done either by a single M employee or a team of M employees and generally took about two weeks.

After a three year gap (1995 – 1998), when there was no M5 in the BMW lineup, a new performance model based on the E39 generation made its debut at the Geneva Motor Show. It was the first M5 to reach 400 bhp; it was also the last one to have a classic manual transmission as standard.

The E60 M5 was introduced in 2005, with an uneven firing V10 engine and 7-speed sequential gearbox taking its inspiration from the BMW Sauber Formula One program. This M5 was also the first one to have over 500 hp. A version with a six-speed manual was sold only in the United States, of all the places. The E60 M5 was the most successful M5, despite being on the market for one year less than the E39 M5. During its five-year run, 20,548 units were built composing of 19,523 saloons and 1,025 wagons.

The mighty V10 was ditched in favor of a 4.4-liter V8 twin-turbo with the debut of the F10 M5. The new engine produced, even more, power than the V10 that preceded it, reaching an astonishing 560 hp. There was even a Competition Package available that increased that figure to 575 hp.

The F90 M5 saw the light of day at the 2017 Frankfurt Motor Show. For the first time, the M5 has all-wheel drive. BMW, however, relies on a rear-biased design which is designed exclusively for driving dynamics. BMW also has included a true rear wheel drive mode, in which power does not reach the front wheels. The engine was transferred from the F10 M5 though it has more power – 600 PS or 591 hp.

Don't forget to check out other amazing videos showing the evolution of iconic cars, like this one, about the Chevrolet Camaro