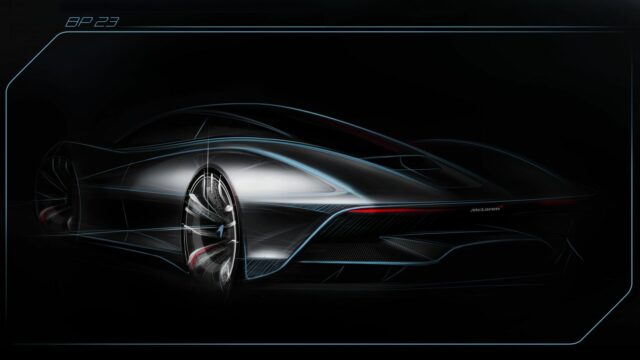 We kind of like McLaren's approach on teasers. Well, that's primarily because they're McLaren but also because their range seems to be heading from awesome to brilliant on a monthly basis.

McLaren's latest sketch hints at the upcoming Hyper-GT codenamed BP23 and touted as the most aerodynamic road-going McLaren ever to hit the asphalt.

Just like the legendary F1, the Hyper-GT will allow seating for three, with the driver sitting centrally and given the responsibility of reaping the output of a hybrid powertrain.

Most likely, the upcoming Hyper-GT (BP23) from McLaren won't look like this. Photo credit: Saporita/deviantart.com

The similarities won't end here, as production will stop after just 106 examples, just like in the case of the McLaren F1. Also, they're all pre-sold. Bummer.

Furthermore, the MSO (McLaren Special Operations) division is working on the Hyper-GT as we write. In fact, owners will keep a tight connection with MSO, as they'll dictate the choice of colors, trim and just about everything that fits under the personalization umbrella.

How about this one? Photo credit: lockandload/deviantart.com

According to Autocar, the Hyper-GT which they call the 2019 McLaren F1 could wear a £2 million sticker (that's about €2.3 million or just south of $2.5 million at current exchange rates).

The same media outlet says the BP23 will rely on McLaren's newly-developed twin-turbo 4.0-liter V8 (as seen in the 720S), but assisted by electric paraphernalia.

If everything goes as planned, McLaren will open deliveries in 2019.