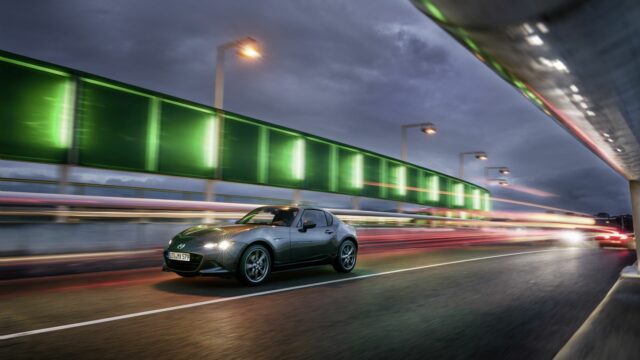 Mazda has added a new version to the MX-5 named the RF. It is the targa-like version, with an electrically folding hard-top. By the way the RF moniker stands for Retractable Fastback.
It's hard to imagine who would like something other than a standard soft-top MX-5, but Mazda says there is a market for a more posh MX-5.
The RF also comes with an automatic gearbox, mated with the 2.0-liter 160 PS engine. And this is a first for the current fourth-gen Mazda MX-5.
Despite gaining 45 kilos, the MX-5 is still scalpel-sharp. It feels like the same lightweight, well-balanced roadster that we all love.

Mazda is one of the few car builders that still resists the trend for small turbo-charged engines. The Japanese engineers believe that naturally aspirated engines are a better choice. For the MX-5 RX, Mazda preserved the same choice of two engines: 1.5-liter with 131 PS and the 2.0-liter 160 PS. The latter can now be paired with an automatic six-speed box, a first for the fourth-gen MX-5 roadster.
We tried both engines. The 2.0-liter is punchy and unleashes its power when revved beyond the 4.000 rpm. It's linear and packs a lot of fun, but sometimes maybe it's too much. My personal opinion is that the 1.5-liter is a better option for the MX-5 RF. Although it delivers only 131 PS, it doesn't run out of breath even revved to the red line. It is better matched to the car and the spirit of the MX-5. And you don't need a lot of horsepower to have fun with this car.
Unfortunately, we didn't get to test the new automatic gearbox, but we're still very much in love with the six-speed manual box with its short throw.

Mazda MX-5 is one of the best handling roadsters in this price range. If the soft-top version is one of the benchmarks, we didn't know what to expect from the RF version. The electric hardtop adds 45 kilos, but the engineers from Japan have tuned the suspension to take the extra load. So, I'm happy to report that the MX-5 RF is as sharp as any other MX-5. The steering rack is super sharp; every little input is instantly translated to the front wheels. The suspension is beautifully tuned, and it's not as stiff as we expected.
She turns with absolute joy on any kind of turn that a road can throw at you. It's the kind of car that instantly plasters a smile across your face. And if you think you can handle the back stepping out, you can turn the stability control with a simple push of a button.

This fourth-generation Mazda MX-5 RF hasn't been assessed by the IIHS or NHTSA, but the soft-top version was tested last year by the EuroNCAP organisation. She scored a four-star rating, failing to get the maximum score because it doesn't offer the autonomous braking system (not even as an option).
But the MX-5 RF offers a complete set of airbags, plus active safety systems like lane keeping warning, and blind spot monitoring.

MX-5 RF adds a foldable hardtop and sloping fastback silhouette to the classic MX-5 formula. It sure looks good when you viewed from outside, but living inside is a different story. The interior is cramped, and you don't get too many places to put your stuff.
But, the nicely tuned suspension means that the RF won't kill your back. You're sitting low, hugged by excellent standard seats, or optional Recaros. Just don't be too tall. If you're over 1,85m, you'll struggle the find a good driving position. The steering wheel is adjustable only for height, not for reach.

The interior of the RF version is quite similar with the one from the soft-top Miata. The materials used are of a higher quality that the ones used in the previous generation. The plastic is soft and a nicer feel when touched. Still, the overall feel is far from a premium car. Also, the RF suffers from wind noise when the hardtop is up. The noise can be heard at head level and it becomes quite annoying after a while.

Well, MX-5 RF is not a practical car. It never wanted to be. It still has the small boot, of only 127 liters, but with a shape that can engulf two small suitcases and maybe, if you're lucky, a small backpack.
Inside, the space for putting things is scarce. There is no glove box, just a covered space between the two seats, and two cup holders. That's it! So, you only have to take the basics with you, if you're planning a trip in an MX-5 RF.

The center infotainment system is the 7-inch screen mounted on top of center console. The system is controlled via a rotating knob found between the two seats. It's intuitive and works well, but we had the navigation system crash twice during our test. The screen went black, but the system resumed its duty quickly.
The audio system is made by Bose and offers excellent sound quality. To free up some space, Mazda and Bose put speakers in the headrests and that gives a new dimension to sound.

Fuel consumption shouldn't be a concern for the future Mazda MX-5 RF owner. Even with the 2.0-liter, 160 PS engine, the official numbers say that she will need on average just 6,6 l/100 km. On our test route, which included motorways, national roads, and some city traffic, we've averaged 8,4 l/100 km. And we pushed hard through the twisty part of the route.

The Mazda MX-5 RF G160 (2.0-liter, 160 PS) comes in two grades named Revolution and Revolution Top on the European markets. We drove the Revolution spec and it's very well kitted. It gets automatic air conditioning, cruise control, automatic rain wipers, automatic LED headlights, power windows and mirrors, rear parking sensors, 17-inch alloy wheels and Smart Key. The G160 also gets a limited slip differential and the Bose nine-speakers audio system. Should you need more, you can opt for the Revolution Top grade that comes with Recaro sports seats, Bilstein suspension and a two-tone finish for the folding roof.

This is not a car you buy with your head. It's the heart that makes that decision. It's not practical, it's cramped but it's the best fun you can reach with this sort of money. On the European markets prices start around €25.000 for the G130 version of the RF and can go up to €30.000 for the top version of the G160.