By calling itself a 'hatchback', the C4 Cactus proves it's not afraid of challenges; and not just any challenge, but one of the toughest

In a quite interesting move for the compact segment, Citroën tries to sell you the C4 Cactus as a hatchback now, associating it with the likes of Ford Focus, Honda Civic, Volkswagen Golf, or Renault Mégane.

If you come to think of it, this decision isn’t as crazy as it may sound, considering that:

2) people get crazy nowadays over everything that's jacked up.

Plus, there’s a backup plan as well: the Cactus is Citroën’s interim representative for the hatchback segment until 2020 when the C4 is being scheduled for a return. We guess this all sits in the new C4 Cactus’ sales figures.

The French are all-in when it comes to pleasing the clientele with SUVs and crossovers, that’s how you can explain the C3 Aircross and the C4 Cactus existing at the same time in Citroën’s lineup. But they’re definitely not the only ones: Opel overbids with Mokka and Crossland X, Suzuki does the same with the Vitara and S-Cross. The difference here is that Citroën dares to call one of them a hatchback and throw it against the classic compact cars, where it would lose.

The thing is, the French manufacturer threw itself in with this relatively wild bid, and we’re curious how’s it going to unfold. Until then, we’ve taken the facelifted Citroën on a trip to see how much more comfortable is with the new 'Progressive Hydraulic Cushions' suspension setup and see how much of the initial Cactus quirkiness is still there. Citroën still keeps it clean and simple with the C4 Cactus: no hybrid powertrain, but some very frugal solutions. The sole diesel unit available so far — the 100-hp 1.6-liter BlueHDi — boasts an 89 g/100 km CO2 emission rating, and the 82-hp/110-hp 1.2-liter PureTech petrol doesn’t fall back too much either, with 117 g/100 km. There’s also a 130-hp version of the PureTech, mated to a six-speed manual (the only version to boast so many gears) which asks for some thousand Euro more; money well spent if you ask me.
That's mainly because the 110-hp unit feels feeble, and everything you do requires working it pretty hard. And it's not just the engine but the drivetrain setup: the five-speed manual, with its long-travel lever and even longer gears, makes every challenge harder for the 1.2-liter PureTech. The more powerful version comes with a six-speed manual if you're not a fan of the automatic 'box.
It's not an absolute turnoff, this 110-horsepower version, but the price margin between the two petrol offers simply makes the more powerful one a better deal. 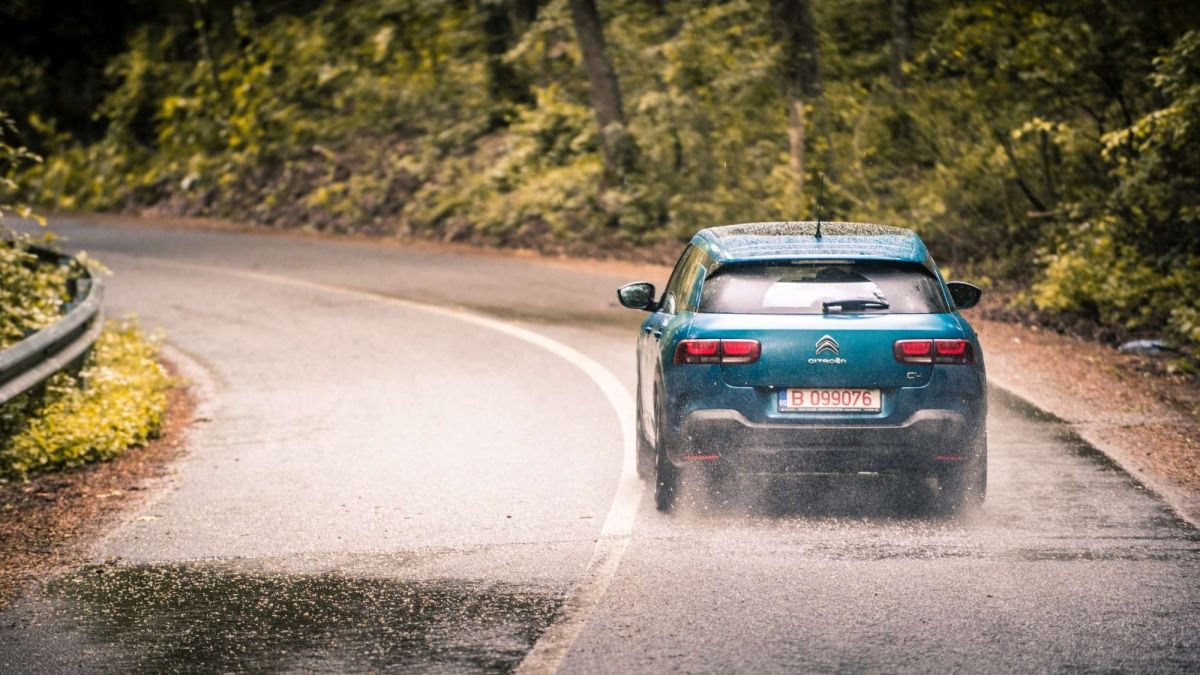 Maybe it’s a bit harsh to compare the C4 Cactus with the Dacia Duster, handling-wise. But that’s what happened, involuntarily, while driving the C4 on a twisty B-road. Throw it around a bit, and it will immediately try to flip you over your seat — which has no side bolstering, by the way. It’s not that it will understeer like crazy, but the vehicle is tilting and pitching over any input. It’s safe (unlike the old Duster), but it’s annoyingly uncomfortable during fast-paced cornering. 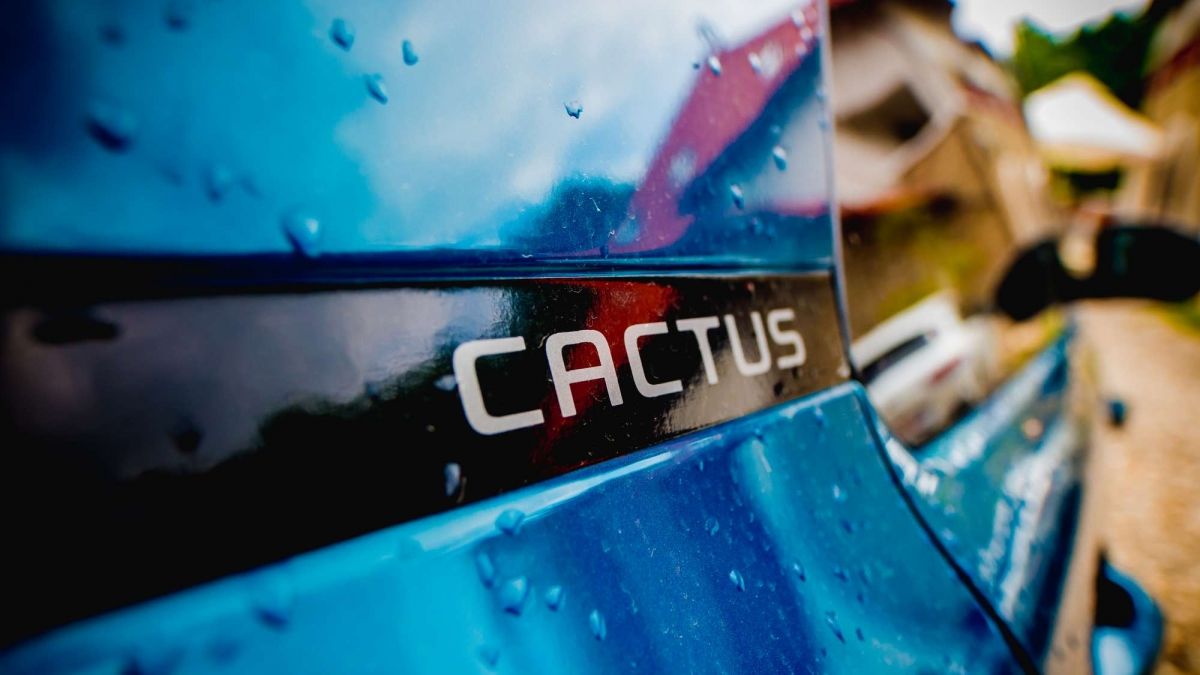 The last time a Citroën C4 Cactus went through Euro NCAP’s crash tests, it received a four-star rating, with 82% protection for adults, 79% for children, and 80% for pedestrians. Although it features all that’s needed from a car to be considered safe nowadays - like Speed Sign Recognition, Departure Warning System, or Park Assist - it is unlikely for this C4 Cactus generation to be re-tested by Euro NCAP and maybe add the fifth star in its safety rating, to be on par with its rivals. 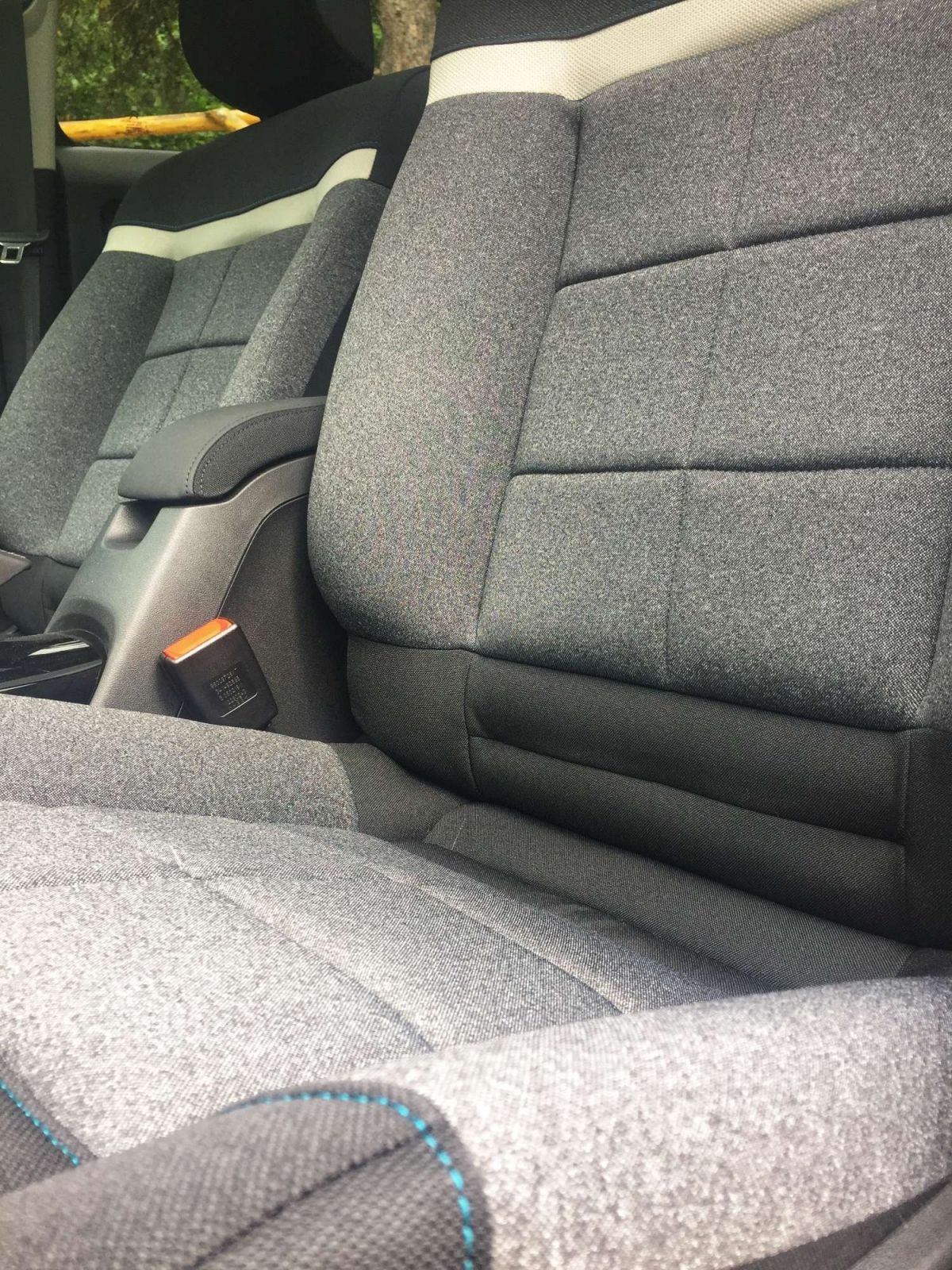 The C4 Cactus features what the French call Progressive Hydraulic Cushions (PHC) which enhance the suspension system with two hydraulic stops — one for rebound and one for compression — on each shock absorber. The aim is to gradually slow down the movement of the suspension under heavy compression/rebound and to deliver a ‘magic carpet ride’ over small bumps.
It sounds ambitious, but it doesn’t deliver as expected: the C4 Cactus is still rattled by the small waves in the asphalt. However, a joy ride in the C4 Cactus at the right pace makes you feel you’re in the right car — the light clutch pedal, the numb accelerator, and the overly long gear lever travel add to this effect. Stick with the smallest rim size for best comfort levels. There are original details that make the C4 Cactus more appealing than most compact hatchbacks: the top-opening glovebox, with its faux-leather straps, is one good example. The door pulls are also made of synthetic leather. Plus, the interior’s simple design accounts for a great(er) impact upon the viewer’s eyes.
The problems start when more than one sense is involved. While the top of the dashboard is nice to touch and look at, the lower part has some really poor plastics; the same happens with the door sills: if you miss that door pull, you’ll encounter hard, scratchy surfaces. The C4 Cactus’ interior is not much worse than what the competition offers, but the contrast between an original idea and its poor execution works against the car rather than in its favor. The C4 Cactus’ boxy design makes for a roomy interior — four adults will fit in without compromises, although the optional glass roof (offered as standard on the top trim) might disturb taller passenger seated in the rear seat. Large doors account for easy access; the boot opening could have been perfect in a wider format. The lack of a false boot floor — to level with the high boot lip, or the folded rear seats — is a bit of a downer when it comes to practicality. 358 liters worth of boot space place the C4 Cactus bellow compact segment's middle line, somewhere close to the Volkswagen Golf (380 liters) but far behind the likes of Peugeot 308 (470 liters) or Škoda Octavia (590 liters). 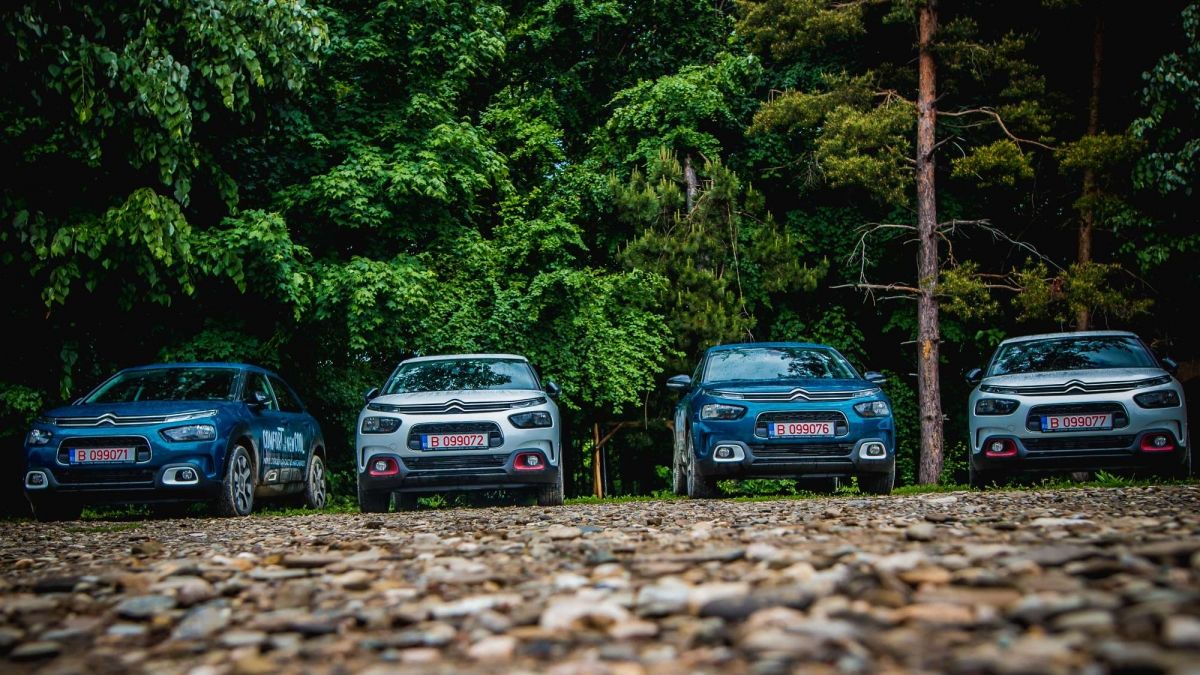 The touchscreen, perpendicularly planted on the C4 Cactus’ dashboard comes in only one size (7 inches) regardless of the trim, although higher trims unlock more features on it, like sat-nav and Citroën’s Connect Box. It’s not just that it looks good, but it’s pretty smart, too: Android Auto, Apple CarPlay, MirrorLink, they’re all supported. Although processor-wise the infotainment system shows decent reaction times, the six touch controls drawn on the black bezel are not the most responsive in the world. That’s one of the things that have a significant potential of annoyance in our book. 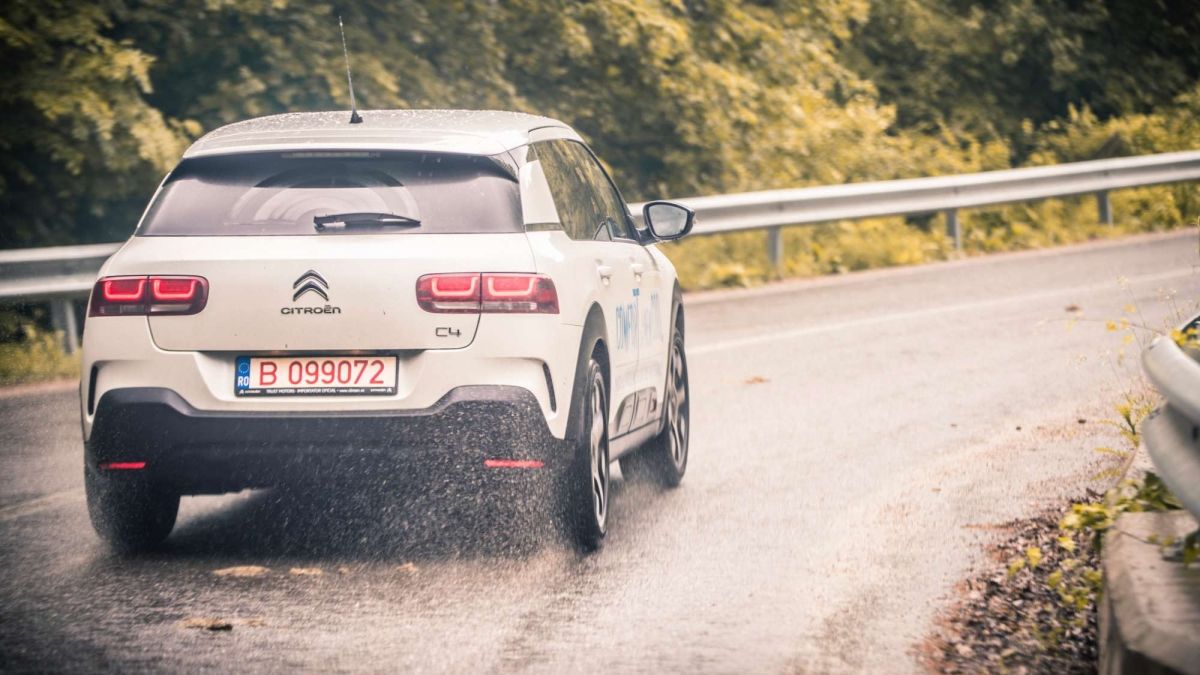 With this frugal engine lineup, you can’t really miss when it comes to picking a version affordable to run. We’ve scored around 8.0 l/100 km (or 35 UK mpg) during the test drive, where we pushed the 1.2-liter unit mostly on twisty mountain roads, before getting stuck in city traffic. If you don’t drive like a maniac, you might score even better. Much better, actually: the C4 Cactus has a claimed 6.1 l/100 km (46.3 UK mpg), and that’s real-world fuel consumption. 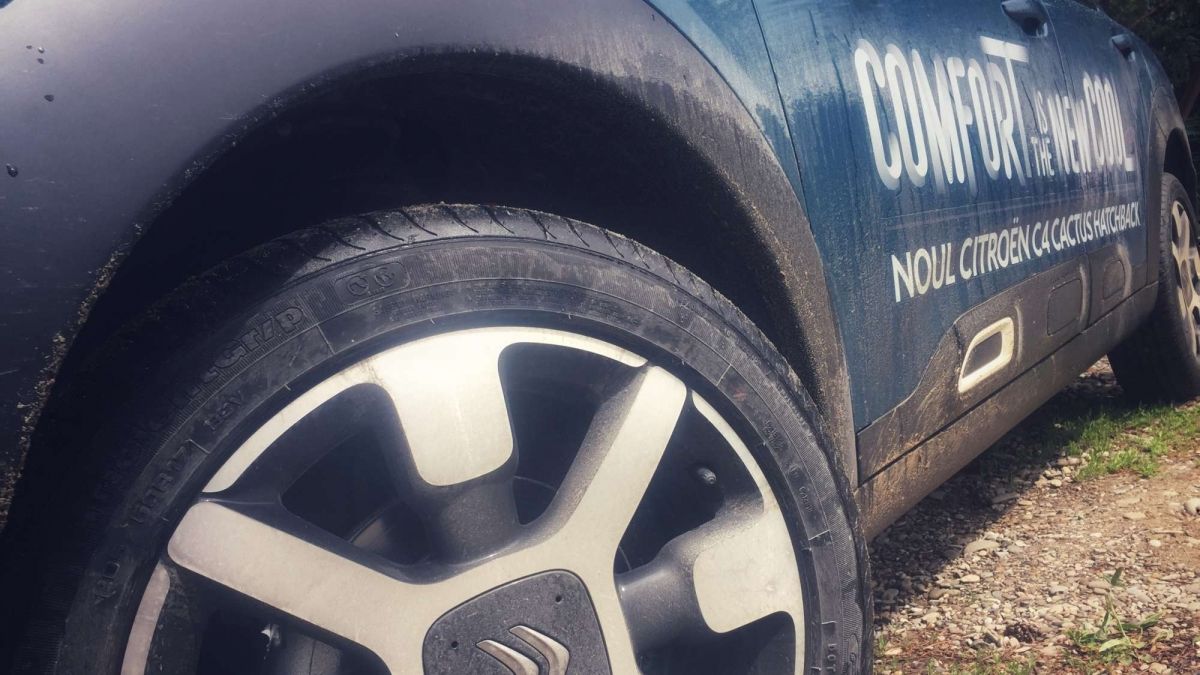 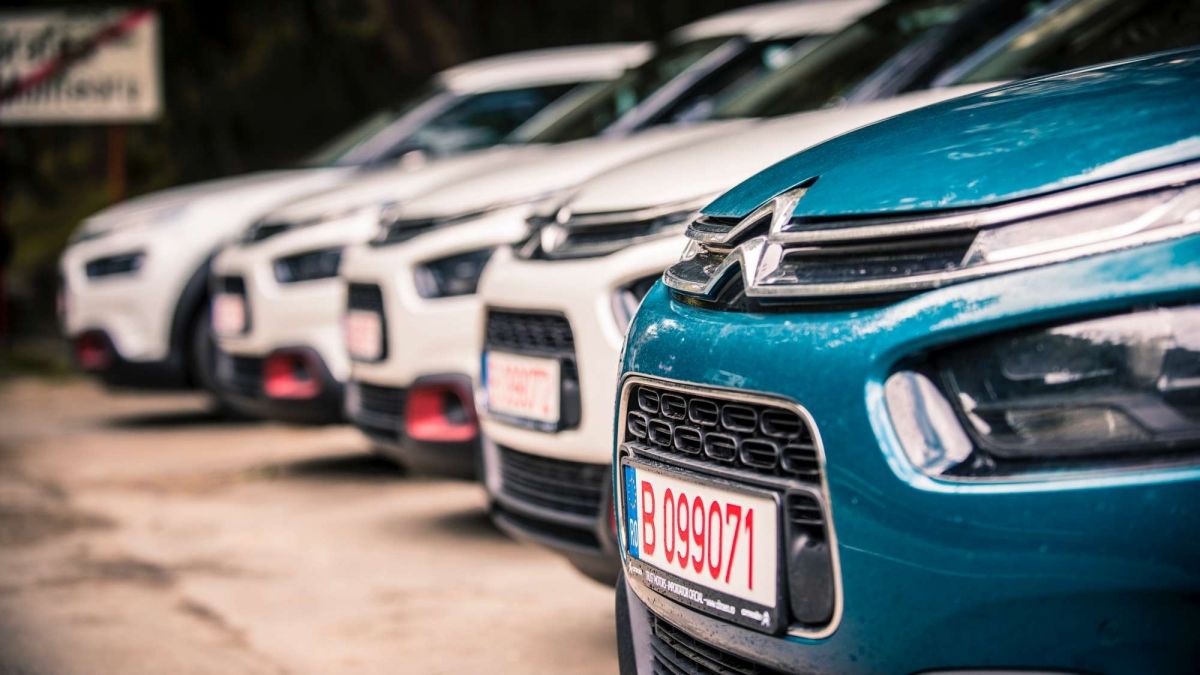 With prices starting at €18,015, the Citroën C4 Cactus is on par with the Golf (€18,075), one of its hatchback rivals — although this margin gets considerably wider (in Citroën’s advantage) once you climb the trim ladder. The C4 Cactus is relatively cheap to buy and is definitely a good deal when it comes to running costs. Only that this daring stunt of comparing itself with ‘the big boys’ costs C4 Cactus a lot of credibility points. It’s a comfortable, cheap-to-run, laid-back, crossover full of character. But a cramped, wobbly, underpowered hatchback.