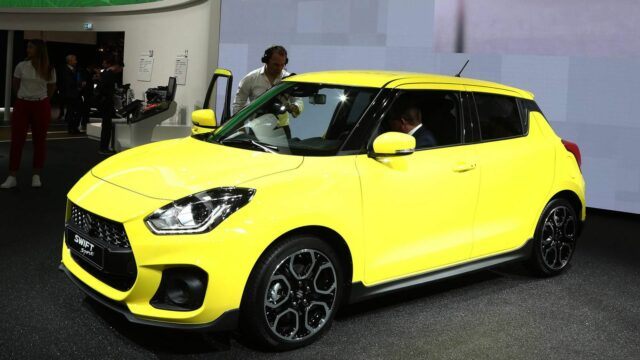 Thanks to a torquey turbo engine and a significant weight drop

Suzuki's stand at the 2017 Frankfurt Motor Show is all about the all-new Swift Sport.

The third-generation B-segment hot hatch features many changes compared to its predecessor, chief of which is the engine. Suzuki made the switch from a naturally aspirated 1.6-liter four-cylinder to a turbocharged 1.4-liter unit in the new Swift Sport.

Add to that a curb weight that has dropped by 80 kg (176 lb) to just 970 kg (2,138 lb), and you begin to understand why the 2018 Swift Sport is quicker than its predecessor. While Suzuki doesn't provide performance specs just yet, it says the new Swift Sport is a genuine hot hatch now.

To support that statement the automaker quotes a weight-to-torque ratio of approximately 4.2 kg/Nm, which apparently ranks the new model among "the most competitive hot hatch models in the market."

The 1.4-liter BOOSTERJET engine works with the same six-speed manual transmission used in the previous Swift Sport — enhanced to offer a "short-stroke and nimble shifting."

Handling is also said to be significantly improved, partly because the 2018 Swift Sport uses the new HEARTECT platform that achieves weight savings and increased stiffness. Another reason is the updated, stiffer suspension.

As far as the design goes, the hot hatch distinguishes itself from lesser Swift models thanks to a lower, wider stance, as well as more aggressive cues including the front grille and bumper, front-lip spoiler, side skirts, rear diffuser, and roof spoiler. The 17-inch polished alloy wheels and dual exhausts also help send the hot hatch message. Unlike the previous three-door Swift Sport, it now comes exclusively as a five-door hatch.