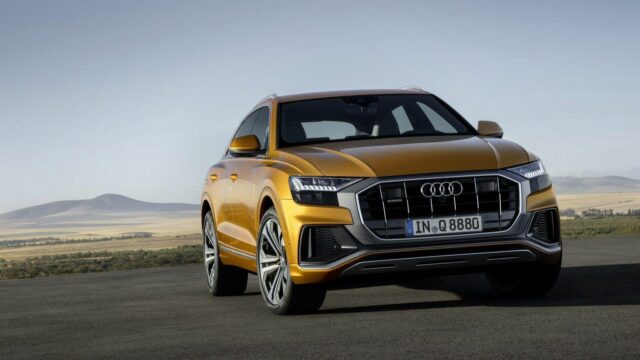 Luxury flagship ready to make waves in China and beyond

Based on the MLB Evo platform, the new Audi Q8 is the brand's "luxury flagship," as Audi's officials called it. Designed to compete with the BMW X6, Range Rover Sport, and the Mercedes-Benz GLE, the Q8 is basically a Q7 with a sloping roofline and sportier demeanor.

Inside you can find the already familiar interior from the brand's best offers, like the A8. Space in the back is still generous, Audi says, because the sloped roof was carefully designed as not to reduce headroom too much, even if the roofline is 40 mm lower than the Q7's.

The instruments are shown in the fully digital Audi virtual cockpit. Its high-resolution 12.3-inch display can be switched between two views via the multifunction steering wheel. The optional plus version includes a third, particularly sporty view. The head-up display also projects important information onto the windshield, including detailed lane guidance for navigation.

The Q7 is not only shorter and lower than the Q7 but also 27m wider, for a more stable stance. Power is sent 40% to the front and 60% to the back in standard mode, but the quattro system can change these percentages as needed. You can also opt for the four-wheel-steering system already present on the SQ7 if you want more agility. Extensive use of aluminum and high-strength steel mean that the car is not too heavy, so it can remain nimble and sporty, a must in this segment.

A third, less powerful diesel engine would follow later this year. It's a tamed version of the 3.0-liter diesel V6 producing just 230 hp for the 45 TDI. A hybrid version should also follow soon, as Audi wants to rapidly electrify its entire range. All drive systems use the new mild hybrid technology (MHEV). The 48-volt primary electrical system incorporates a lithium-ion battery and a belt alternator starter. During braking, it can recover up to 12 kW of power and feed it back into the battery. The MHEV technology enables long coasting phases with the engine deactivated and a start-stop range that begins at 22 km/h (13.7 mph).

There are plenty of options to choose from: adaptive air suspension with controlled damping, with either comfort or sport setup, adjusts the ride height depending on the driving situation and the driver’s preference by as much as 90 millimeters (3.5 in); customized contour seats with massage function and ventilation; four-zone automatic air conditioning; matrix LED headlights and more.

More info to follow soon, as the model is launched right now in China, so stay put, we'll update this article during the day.