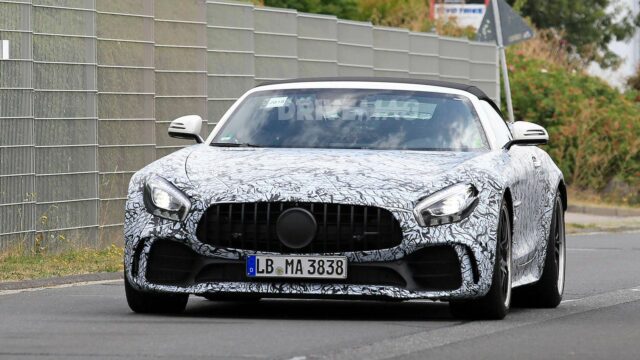 Don’t get fooled by that heavy camo

In case you got confused by the nomenclatural nonsense regarding Mercedes’ SLS AMG successor, here’s a short recap: the model is called AMG GT, and is offered in two body types — Coupé, and Roadster.

Because we want to talk now about the AMG GT Roadster. We’ll keep it short(er) this time: it features the exact same versions as the Coupé, the only difference being its soft top, of course. Well, almost exact same versions, because there’s one model missing: the GT R Roadster. But not for long.

Recent spy photos (which you’ll see in the photo gallery above) show the R-badged AMG GT subjected to road tests. Despite being camouflaged, imagining it without is not even a challenge — just look at an AMC GT S Roadster and replace that face with a more aggressive one.