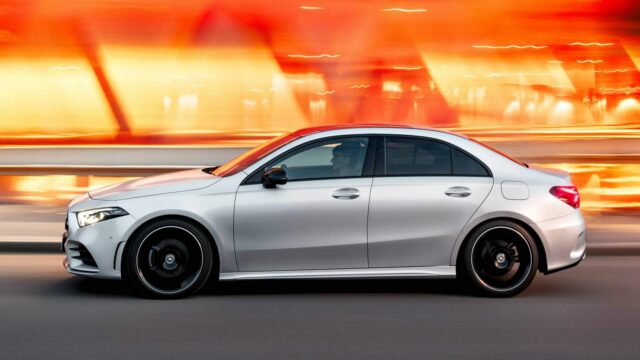 Following the reveal of the all-new A-Class hatchback and the China-exclusive A-Class L Sedan earlier this year, it is now time for an official look at the shorter-wheelbase A-Class Sedan Europe and North America will get.

As with the CLA at its launch in 2013, the A-Class Sedan has the lowest aerodynamic drag of all production vehicles worldwide thanks to a drag coefficient (Cd) value of 0.22 and a frontal area of 2.19 square meters.

Unlike the CLA, however, the A-Class Sedan offers rear headroom levels that position it “at the top of its segment,” according to Mercedes-Benz. The four-door sedan has a wheelbase of 2,729 mm, matching the hatchback in this respect but gaining 30 mm over the outgoing CLA Coupé.

The A-Class Sedan is 4,549-mm long, 1,796-mm wide, and 1,446-mm high. It’s shorter than the CLA due to the shorter overhangs, but slightly taller and higher. The automaker cites above-average shoulder, elbow and headroom, as well as easy access to the rear. Boot capacity is identical to China’s A-Class L, at 420 liters.

US-spec models will get a 2.0-liter turbo-four gasoline engine rated at 188 hp and 221 lb-ft (300 Nm) of torque, mated to a seven-speed dual-clutch transmission. The model will be sold as the A 220 in FWD guise and A 220 4Matic in AWD configuration.

Besides the design and the engines, the four-door sedan shares most underpinnings with the A-Class hatchback, including the suspensions. As standard, the A-Class Sedan offers a McPherson design for the front axle and a torsion-beam rear axle. The more powerful versions and models with 4MATIC, adaptive damping or larger wheels are fitted with a four-line rear axle. Customers can order the new model with wheels ranging from 16 to 19 inches.

As with the already available A-Class models, the sedan offers a decent standard equipment that includes the MBUX (Mercedes-Benz User Experience) infotainment system with touchscreen, as well as driving assistance systems such as Active Brake Assist and Active Lane Keeping Assist.

The list of optional extras is obviously very long, with highlights such as the Keyless-Go Convenience Package with Hands-Free Access, the high-resolution Widescreen Cockpit with three configurations (two 7-inch displays, one 7- and one 10.25-inch displays, and two 10.25-inch displays), Multibeam LED headlights, as well as an array of driving assist systems adopted from the S-Class.

Customers will be able to customize the design of the car further with the Style, Progressive, and AMG Line packages, as well as the Night Package. Furthermore, an Edition 1 model offering copper-colored highlights inside and out will be available in the year of the market launch.

The 2019 A-Class Sedan will be built in Aguascalientes, Mexico starting this year, and in Rastatt, Germany from next year. The model will have its public debut at the Paris Motor Show (October 4-14), with sales starting shortly after that in Europe and the United States.