Lamborghini LM002: how the brand's first SUV entered history as the "Rambo Lambo"

For starters, it shared its V12 muscle with the Countach supercar

December 4, 2017 will be the day a new super sports SUV steps into the limelight: we're talking about the Lamborghini Urus.

But brand aficionados know the Urus is not the Italian supercar manufacturer's first SUV. When it comes to luxury utility vehicles, Lamborghini truly was one of the pioneers.

Cheetah, the Humvee that wasn't meant to be To find the roots of Lamborghini's first production SUV we need to go back to 1977 when the Italian company unveiled the Cheetah. It was a prototype for an all-terrain vehicle that was produced according to U.S. Military requirements as Lamborghini was hoping to secure a contract for the Willys MB replacement model.

The Cheetah featured a rear-mounted 5.9-liter Chrysler V8 engine mated to a three-speed automatic transmission. Although the bodywork was built of fiberglass, the Cheetah still weighed a little over 2 tonnes, which meant the 180-hp power plant was too feeble for a vehicle designed to safely carry four fully-equipped soldiers plus the driver over rough terrain. Another drawback was the fact that the engine was mounted on the rear axle, which gave the Cheetah very poor handling characteristics. In the end, the U.S. Military wasn't impressed with the Cheetah and chose AM General's similarly-looking Humvee instead.

Still, we could speculate that the Cheetah influenced the Humvee's design (it was unveiled before it), and that is quite an achievement in itself. But Lamborghini's prototype found another purpose in life, as you're about to see.

The Cheetah gets a second shot at fame 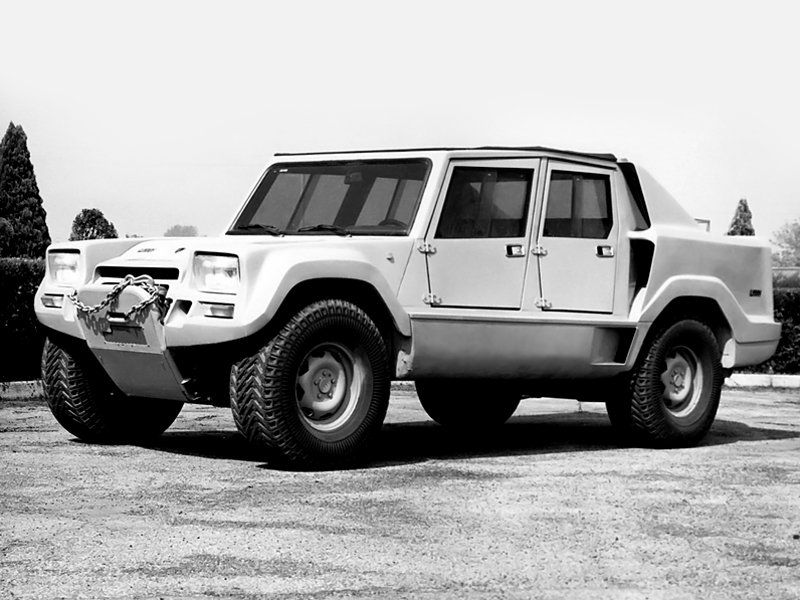 In the early 1980s, Lamborghini engineer Giulio Alfieri unearthed the project and realized it would make a good starting point for a production SUV from Sant'Agata Bolognese. Fast forward to 1981, and the Lamborghini LM001 Concept is unveiled at the Geneva Motor Show as an evolution of the Cheetah. 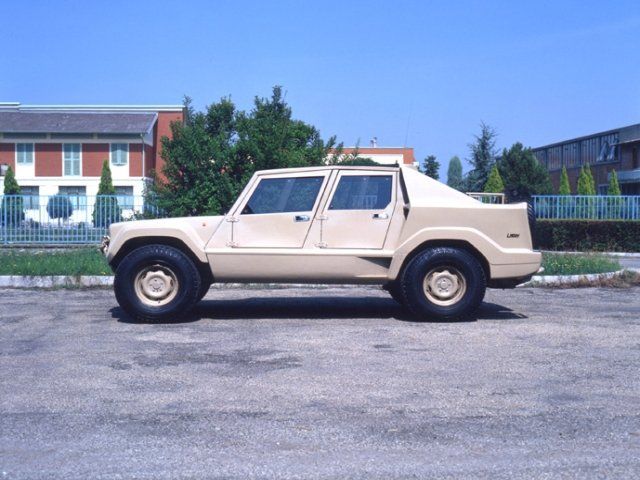 Unlike the Cheetah, however, the LM001 featured an AMC V8 with a similar displacement and output: 5.9 liters and 180 hp. Unfortunately, it was still installed at the rear, which translated into bad handling characteristics. Not even Lamborghini's promise to use a V12 for the production model was enough to convince potential buyers. As a result, only one LM001 saw the light of day. 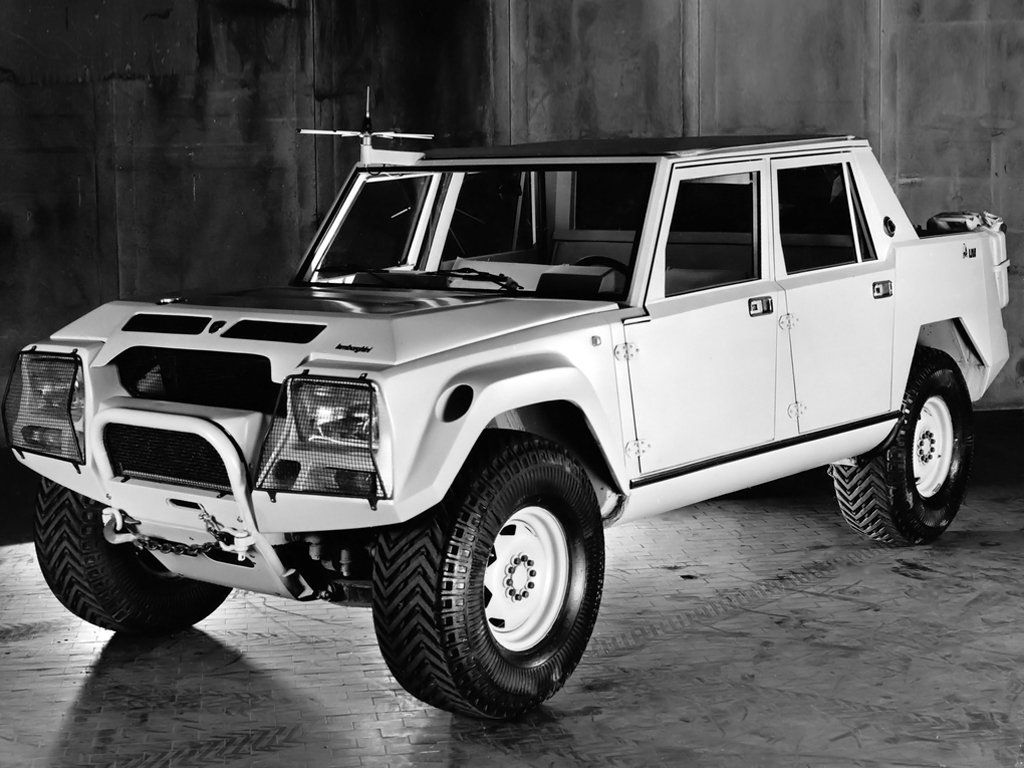 One year later, Lamborghini fixed the problem and returned to Geneva with the LMA002 prototype, where "A" stood for "anteriore" meaning "front." Yes, this time Lamborghini changed the position of the engine and switched from a V8 to a V12 engine sourced from the Countach supercar. 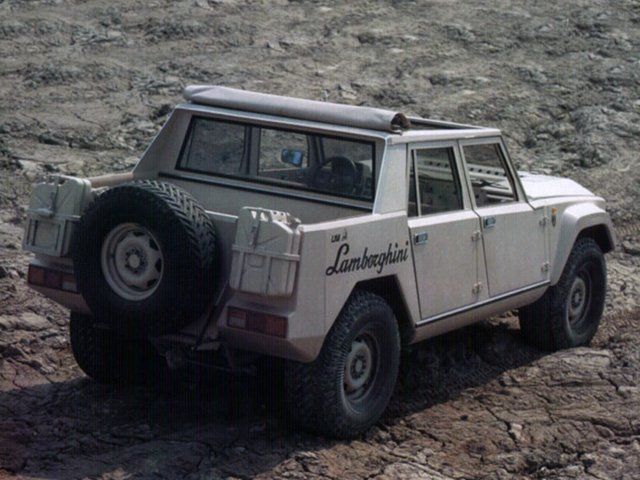 More changes had to be performed because of the heavier, front-mounted engine. For example, the chassis became a multi-tubular steel space frame, the suspension and tires were modified as well, and power steering was installed. Furthermore, the automatic transmission was replaced by a five-speed manual gearbox. All in all, the LMA002 was 500 kg heavier than its predecessor.

The LM002 finally arrives in 1986 as Lamborghini's first SUV 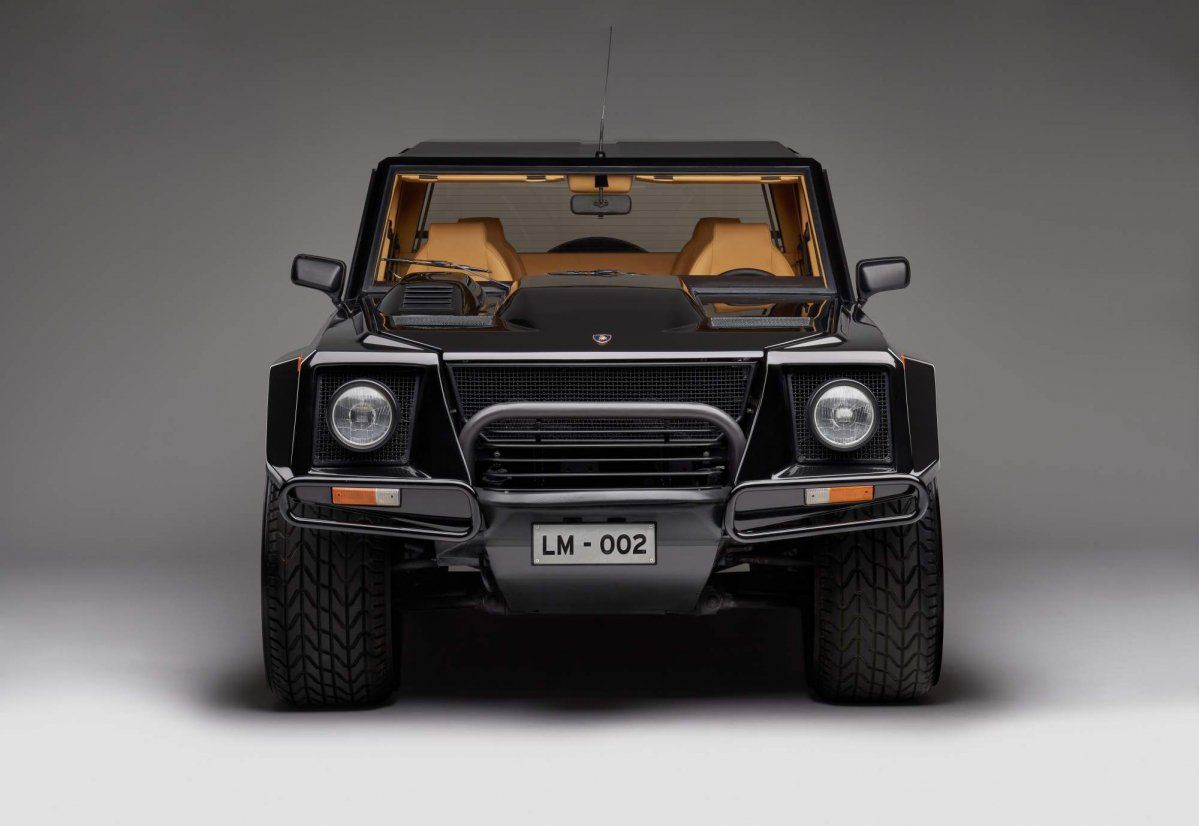 It took Lamborghini four years to unveil the final production version of the LM002. The new model debuted at the 1986 Brussels Auto Show and stayed in production until 1992.

The bodies were produced near Bilbao, Spain, with the semi-assembled parts shipped to Sant'Agata Bolognese where the fitting of the powertrain and mechanical parts took place, along with finishing, testing, and delivery. 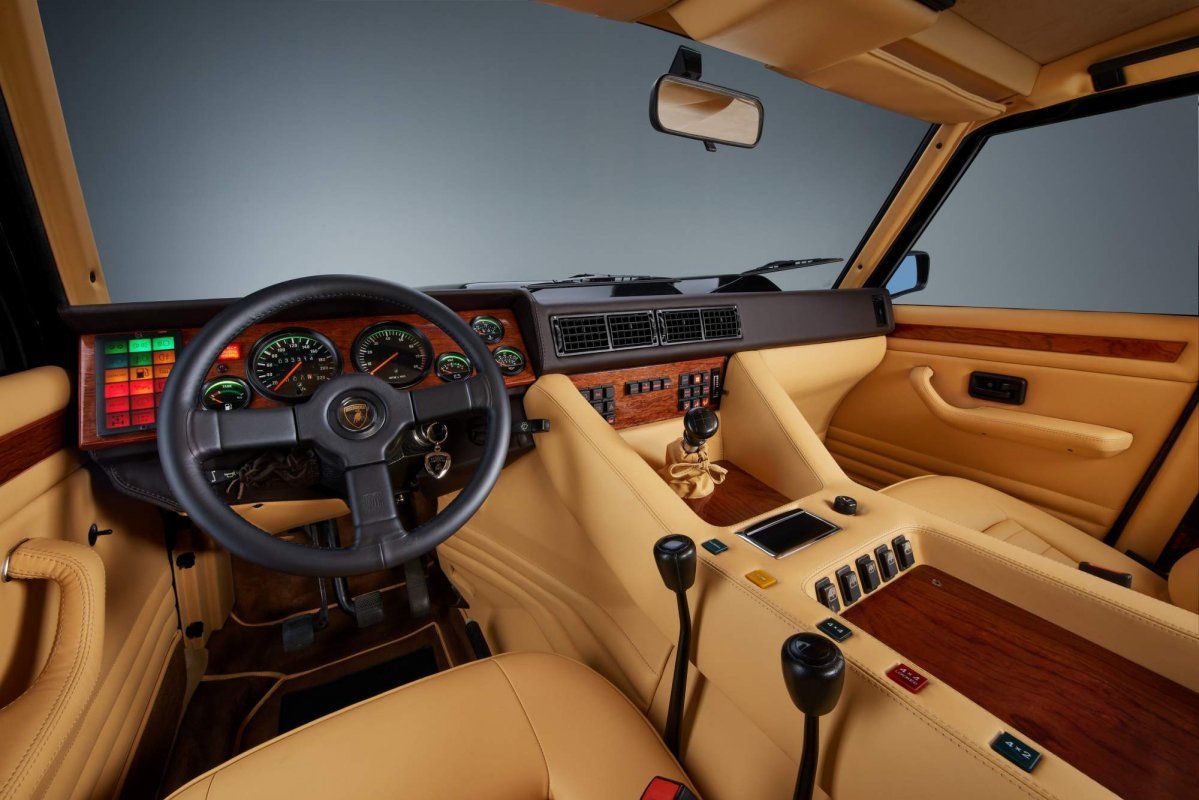 The LM002 generated a lot of excitement when launched because it was unlike any other vehicle at the time. It combined sports car performance with significant off-road capabilities and it had an imposing presence and a luxurious interior — even though the leather upholstery and air conditioning were optional extras. Think of it as a 1980s Porsche Cayenne — just way more massive and exclusive. 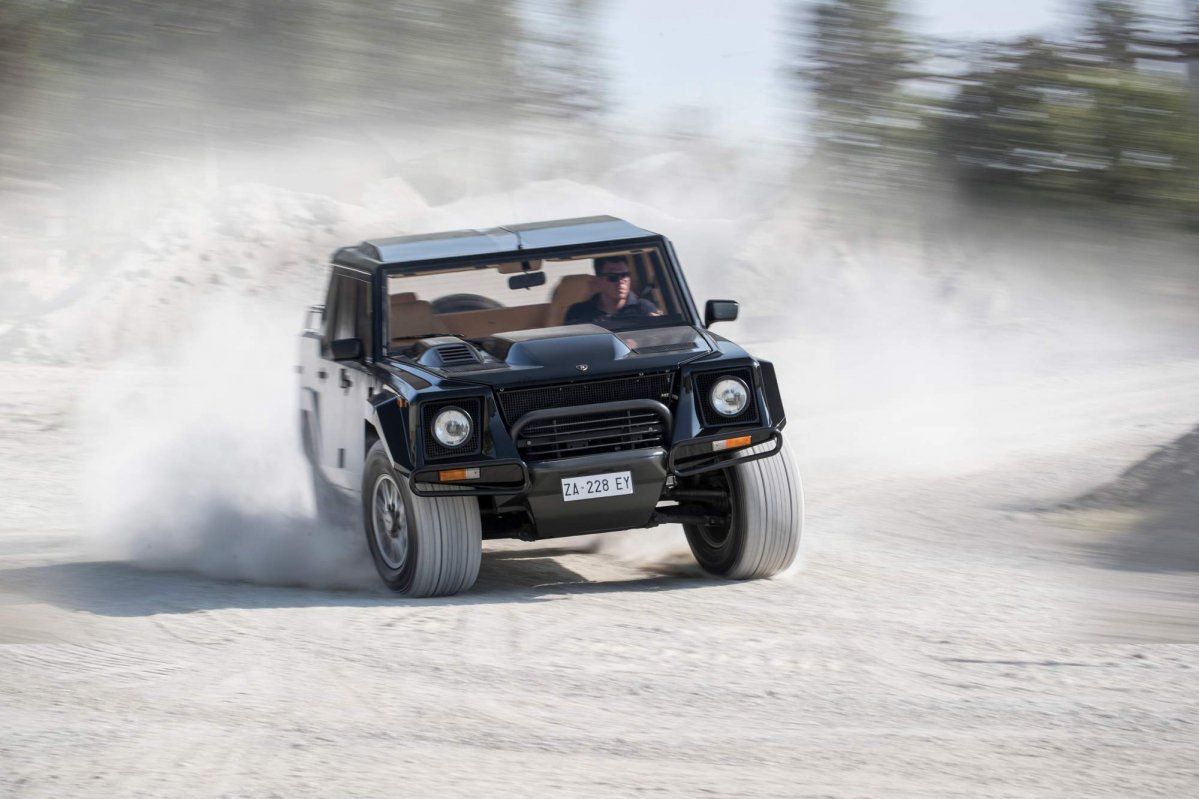 No wonder people started calling it the "Rambo Lambo." Like Rambo, it always carried a lot of ammo in its 290-liter fuel tank, which needed to be so big because the LM002 averaged 20 l/100 km (11.7 mpg US) when driven normally — let's not even start talking about the mileage achieved when pushed hard. 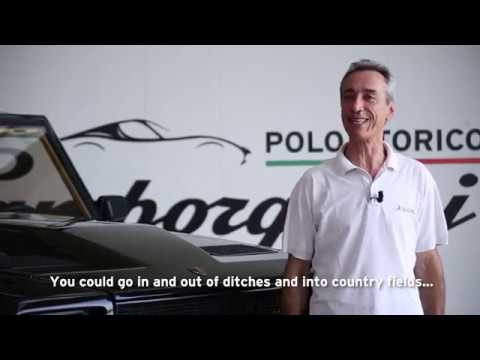 The on-road performance may not sound impressive by today's standards, but the LM002 was also capable of climbing a 120% gradient, helped by its four-wheel-drive system, transfer case, and three self-locking differentials.

The LM002 used specially-developed Pirelli Scorpion tires with a run-flat tread design that allowed "floating" capabilities across soft surfaces such as sand. They were also highly durable in hot conditions. The LM002 was designed to withstand tough desert conditions because the Middle East was its main market. Many of the 300 units built ended up in the region, although the LM002 was quite successful in the United States as well. Not so much in Europe, however. Imagine maneuvering the 4,900-mm long, 2,000-mm wide V12-powered mammoth on narrow streets, and you'll realize why. The Lamborghini LM002 surely looked more at home in the desert or on off-road trails than in the city.

Make way for the Urus

Now, 25 years after the LM002 ceased production, Lamborghini is gearing up for the launch of another super SUV, the Urus. It promises to be a worthy successor, with "exceptional power and torque, distinctive design and a very significant presence," according to the automaker. It's also said to offer "exceptional" road-going dynamics, performance, luxury, and off-road capabilities — including in the sand. Something tells us the Urus will be big in the Middle East too. 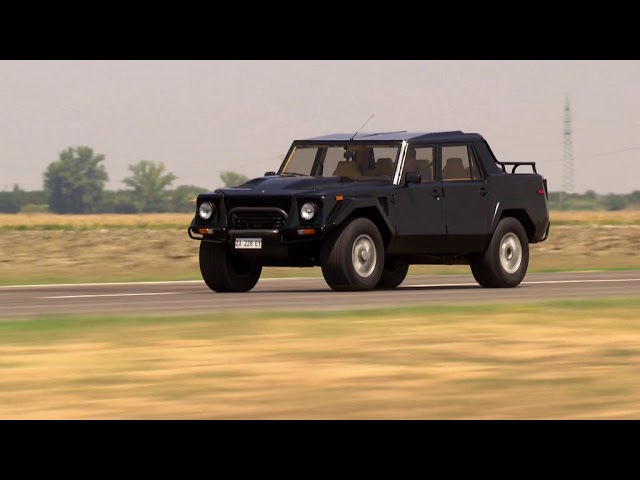 If you're into SUVs derived from military vehicles, the Toyota Mega Cruiser is definitely your cup of tea.