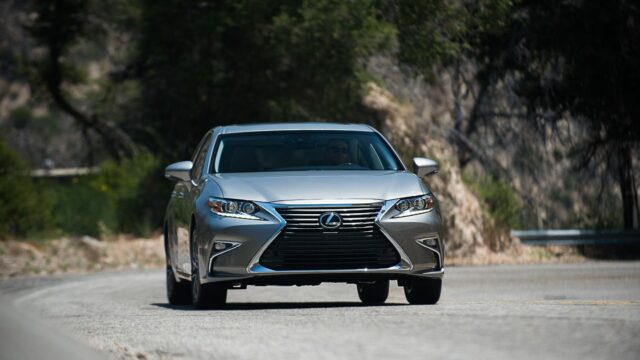 The Lexus ES is one of the company's oldest nameplates – it has been around since 1989. Now in its sixth-generation, the front-wheel-drive full-size luxury sedan represents a welcome alternative to rear-wheel drive, performance-focused competitors from Germany and even from Lexus' backyard – we're talking about the GS. The ES is all about comfort: it offers a cushy ride, a spacious and silent cabin as well as luxurious equipment and trim. Essentially, it's a luxed-up Toyota Avalon, with which it shares the platform. Sold in North America and China but not in Europe or Japan, the ES has received both styling and equipment updates for the 2016 model year.

Lexus offers two powertrains in the United States for the 2016 ES. The base 3.5-liter V6 gasoline engine delivers 268 hp and 248 lb-ft of torque, while the ES 300h hybrid pairs a 2.5-liter four-cylinder gasoline engine with an electric motor and battery pack for a total system output of 200 hp. Mated to a six-speed automatic transmission, the V6 engine is very smooth and well-mannered. It also packs plenty of punch, with the 0-60 mph sprint taking 7.1 seconds. The ES 300h hybrid focuses on fuel economy, but remains reasonably quick, completing the 0-60 mph sprint in 8.1 seconds. Mated to a CVT, the hybrid can run on electric power alone for short distances. In addition to the ES 300h, China also gets the ES 200t 2.0-liter turbo four-cylinder engine.

The Lexus ES is built to deliver a comfortable and refined ride rather than catering to the tastes of sporty drivers. The ES is not the best-handling sedan in its class, as RWD competitors from Germany and elsewhere are much better. However, it offers a decent balance between comfort and handling accuracy. Through turns, the ES' steering feels a little light in "Normal" mode, but steering effort increases in "Sport" mode, slightly improving the experience. While some rivals such as the Acura TLX and Hyundai Genesis offer optional all-wheel drive, the Lexus ES is only available in a front-wheel drive configuration.

The sixth-generation Lexus ES is a very safe vehicle. The full-size luxury sedan has been crash-tested in the United States by the NHTSA, which gave it a maximum five-star overall rating. The government-run organization awarded the ES five stars for frontal crash, five stars for side crash, and four stars for rollover. The Insurance Institute for Highway Safety (IIHS) also assessed the ES, with the organization giving the 2016 ES the "Top Safety Pick+" rating. That's because the Japanese sedan gained maximum "Good" ratings for small and moderate overlap front impacts, side impact, roof strength, as well as head restraints & seats.

There aren't many alternatives within the ES' price range that deliver similar levels of comfort and ride quality. The suspension quietly and nicely absorbs road imperfections, though passengers aren't completely isolated from bumps. The cabin is remarkably quiet and minimal noise reaches the occupants' ears – whether it's coming from the road, wind or engine. The seats are comfortable for four adult passengers, and the controls are intuitive and easy to use. There's nothing really to criticize about the ES when it comes to comfort.

Quality is another chapter where the ES leaves little to be desired. The cabin packs upscale materials and the precise fit and finish we've come to expect from a Lexus. The interior has a high-tech vibe that is only interrupted by the stylish analog clock placed in the center of the dashboard. For the 2016 model year, Lexus has introduced a redesigned steering wheel, new colors and trim, as well as a 4.2-inch TFT screen between the instruments. Whether with the standard perforated vinyl upholstery or the optional leather, the ES' build quality is top notch.

There's plenty of space for four adult passengers in the Lexus ES. The rear seat can accommodate three people if needed, but the passenger sitting in the middle will not be very comfortable during long-distance trips. Legroom for rear seat passengers is very impressive, though. Headroom is good as well, but occupants 6-foot tall and above will touch the roof with their heads in models equipped with the optional panoramic sunroof. The trunk is average-sized, offering 15.2 cubic feet of space. A drawback is the fact that the rear seats do not fold down – they only offer a pass-through that is useful when carrying longer items.

The 2016 Lexus ES features the Display Audio interface as standard. The infotainment system includes a 7-inch touchscreen and a control knob. Bluetooth phone and audio connectivity, Siri Eyes Free, an 8-speaker sound system with CD player, satellite radio, HD radio, an auxiliary audio jack, and an iPod/USB audio interface are also standard. The optional Navigation package adds a larger 8-inch touchscreen, the mouse-like Remote Touch interface (distracting to use while on the move), a navigation system, voice controls and enhanced Bluetooth connectivity, among other features.

The 2016 Lexus ES 300h is the most economical engine in the U.S. lineup, with an EPA rating of 40 mpg combined (40 mpg city/39 mpg highway). The fact that the ES 300h can also run solely on electricity at lower speeds obviously contributes to its efficiency. However, some reviewers and users complain that the ES 300h fuel economy ratings are exaggerated. The V6-powered ES 350 burns more fuel than the ES 300h, with a 24 mpg combined rating (21 mpg city/31 mpg highway).