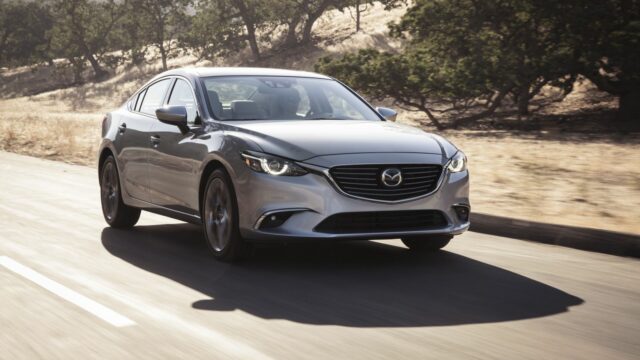 The third generation Mazda6 is a widely appreciated midsize family sedan, thanks to its distinctive design, sporty handling, good fuel economy and refined powertrain, among other things. Launched in January 2013 as a 2014 model, it received a significant makeover for the 2016 model year, which brought styling and equipment updates. Offered exclusively as a sedan with a single gasoline engine in the U.S., the Mazda6 also comes in an estate variant in Europe, where the lineup includes more gasoline and diesel engines, as well as all-wheel drive. The model is called Mazda Atenza in Japan and China.

You won't have a hard time deciding which engine variant to get because Mazda offers only one in the U.S., a 2.5-liter four-cylinder gasoline unit that delivers 184 hp at 5,700 rpm and 185 lb-ft at 3,250 rpm. The engine pulls well and is linked to a standard six-speed manual gearbox or an optional six-speed automatic transmission. The latter is also available with the i-Eloop regenerative braking system, which improves mileage by around 5 percent. For Europe, Mazda offers two 2.2-liter diesel units (with 150 PS and 175 PS), as well as two 2.0-liter gasoline powerplants (with 145 PS and 165 PS). Some markets also get the 2.5-liter engine with 192 PS, as well as optional all-wheel drive.

Although not as sporty as its predecessor, the Mazda6 remains one of the most fun to drive non-premium midsize sedans on sale in the United States. The Japanese model's finely-tuned chassis and standard six-speed manual gearbox make it a fun car to drive on twisty roads. The steering is quite light, but the biggest downside is ride quality – it's firmer than what you'd expect from a midsize family sedan. Road irregularities are more noticeable in the Mazda6 than in most rival models. A wise decision would be to avoid the optional 19-inch alloy wheels, as they only make things worse.

The 2016 Mazda6 sedan is one of the safest cars in its segment sold in the U.S., with the IIHS giving it with the "Top Safety Pick" rating. The model received "Good" scores for small and moderate overlap front impacts, side impact, roof strength, as well as head restraints & seats. The 6 also received a "Superior" rating for front crash prevention. Euro NCAP crash-tested the Mazda6 Wagon in 2013 and gave it a five-star overall score. Depending on the market, standard safety features include seven airbags, traction and stability control, ABS, speed assistance system, and rollover sensor (from 2016 MY).

While the Mazda6 lags behind rivals in terms of ride quality, the seats manage to improve comfort a little and the driving position is good. For the most part, the controls are where you expect them to be: the ventilation controls down low, those from the infotainment system in the driver's eyesight. However, the dashboard's layout is not as intuitive as on the VW Passat and the center console is a bit cluttered. Road noise gets inside the Mazda6 more than in rival models.

The interior appears to be well built, with base models getting a polished aluminum trim while range-topping Grand Touring models feature leather upholstery with contrasting stitching. The quality of materials and the fit and finish are better from 2016 onwards, but you'll still find some low-grade plastics throughout the cabin. The facelift also fixed the infotainment system, which has been criticized on 2014-2015 models because of the small touch screen and below-average map details.

There's no shortage of space for front seat occupants, with plenty of legroom and legroom for both. Space is good in the back as well, but the Mazda6 sedan's sloping roofline penalizes headroom for those who are over six feet tall. The Mazda6 estate doesn't have that problem, though. Trunk capacity is 14.8 cu-ft for the sedan, which is a decent amount. The estate offers more space for luggage (522 liters or 18.4 cu-ft), ranking below the Ford Mondeo estate but on par with other rivals.

Beginning with the 2016 model year, Mazda has given the 6 a more modern MazdaConnect infotainment system, which pairs a new 7-inch touch screen mounted on top of the dash with a rotary controller placed on the center tunnel – a similar concept to what German premium brands are offering nowadays. Navigating through the menus is easy using the controller, but if you don't want to do that Mazda offers standalone buttons for the audio and navigation systems. The new infotainment system is a big improvement over pre-facelift models.

The most fuel-efficient version in the U.S. is the one with automatic transmission and the i-Eloop regenerative braking system, with an EPA-estimated combined rating of 32 mpg. However, the base model with the manual gearbox is remarkably economical compared to rivals, returning 29 mpg combined. Automatic models without i-Eloop average 31 mpg. Much more economical is the diesel-powered Mazda6 sedan offered in Europe, with the 150 PS version officially rated at 3.9 l/100 km (109 g/km CO2) according to the NEDC test cycle.

The 2016 Mazda6 starts at $21,495 in the U.S., which makes it about $600 cheaper than the base 2016 Ford Fusion S equipped with the standard 175 hp 2.5-liter four-cylinder engine. It's also about $600 cheaper than America's best-selling midsize family sedan, the Honda Accord (2016 model, in base LX trim with the 185 hp 2.4-liter unit). The thing is the Mazda6 competes in a very crowded segment with many high-quality models. It's not the best of its kind, but it certainly is one of the most fun to drive. If that's what you want from a family sedan, the Mazda6 is the car for you.