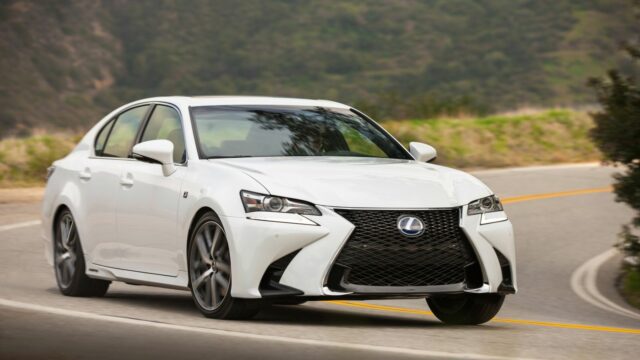 Lexus has been making the GS executive sedan since 1993 as a rival for the Mercedes-Benz E-Class and the BMW 5-Series. Currently in its fourth generation (launched in late 2011), the GS has evolved tremendously and it is a real alternative to German premium competitors. For the 2016 model year, Lexus has given the GS a styling and equipment makeover, as well as a new 2.0-liter turbocharged four-cylinder engine in the GS 200t. The U.S. lineup also includes a V6, a hybrid version, as well as a high-performance V8-powered GS F variant.

Lexus offers four powertrain choices in the United States for the GS sedan. The GS 200t entry-level model is powered by a 2.0-liter turbocharged four-cylinder engine rated at 241 hp while the GS 350 features a 311 hp 3.5-liter V6. The GS 450 h packs a 3.5-liter V6 gasoline engine and an electric motor and a battery pack for a combined system output of 338 hp. There's also the high-performance GS F powered by a naturally aspirated 5.0-liter V8 engine delivering 467 hp. In Europe, Lexus also offers the GS 300h hybrid which combines a 2.5-liter four-cylinder Atkinson cycle gasoline engine with an electric motor and battery for a total system output of 223 PS.

The Lexus GS offers a good balance between handling and comfort, with a refined ride in most driving conditions. Due to their 19-inch alloy wheels and stiffer suspension, F Sport models are sharper round the bends, but without sacrificing comfort – it's true, however, that the ride is slightly bumpier if the adaptive dampers are not selected. The GS F's ride is the firmest of them all, although it's less harsh than in the case of the RC F coupé, which shares most underpinnings with the performance sedan.

The fourth-generation Lexus GS has been crash-tested in the United States by the IIHS, which gave it the maximum "Good" rating for moderate overlap front impact, side impact, and roof strength. However, the organization rated the GS' front crash prevention as "Basic", because the model lacks an auto-brake function. The GS has not been assessed by the NHTSA or Euro NCAP. Standard safety features include eight airbags, ABS, stability and traction control, blind-spot monitoring, rear cross-traffic alert, a rearview camera, and front-seat active head restraints.

The Lexus GS' ride is silky smooth, and the cabin is a very comfortable place. Finding a good driving position is easy, thanks to the adjustment offered by the seat and the steering wheel. The front seats are comfortable and provide ample lateral support. The visibility is good both forward and rearward while the buttons are well-placed and intuitive to use. Some reviewers have complained about road noise on rougher surfaces, though.

The GS boasts a high-quality cabin with great fit and finish and nice materials that match what German rivals have to offer. The interior features supple leather, wood, aluminum and carbon fiber, as well as synthetic suede accents. There are some colorful details like the classy analog clock surrounded by trim machined out of a single block of aluminum. Overall, the cabin looks and feels understated and elegant, a feat not many automakers manage to pull off.

While the fourth-generation Lexus GS is more spacious than the previous model, it is not as practical as some rivals. There's plenty of legroom at the rear, but foot space is quite limited, and rear headroom is tight for anyone over six-feet tall – despite the fact that the GS is 30 mm taller than its predecessor. Trunk space is on par with rivals at 14.1 cubic feet, but the rear seats do not fold to expand cargo volume. Hybrid versions have a smaller boot because of the need to accommodate the batteries.

2016 Lexus GS models get an upgraded 12.3-inch high-resolution display that can show full-screen navigation maps. However, the Remote Touch interface remains the only way to control the infotainment system and the primary method for adjusting audio and navigation functions. That's a shame because the mouse-like controller is far from an ideal tool. Cursor control with the device is problematic, especially while the car is on the move. Unfortunately for Lexus, most infotainment systems offered by rivals are less distracting and easier to use.

As you would expect, the Lexus GS 450h hybrid is the most fuel-efficient model offered in the United States, returning 31 mpg combined (29 mpg city/34 mpg highway). The four-cylinder GS 200t in rear-wheel drive configuration averages 26 mpg while the six-cylinder GS 350 RWD returns 23 mpg. In Europe, the most economical version is the GS 300h hybrid, with a claimed average fuel consumption of 4.7 l/100 km. If it matters, the 2016 GS F high-performance model returns 19 mpg combined.

The base 2016 Lexus GS 200t starts at $45,615 in the United States (excluding a $950 destination charge). That makes it significantly more affordable than the 2016 BMW 528i ($50,200) and slightly less expensive than the 2016 Audi A6 2.0 TFSI ($46,200). Mercedes-Benz doesn't yet offer a four-cylinder E-Class model in the U.S. The Lexus GS is a competent rival for the German trio and makes an ideal choice for those who want a comfortable and luxurious executive sedan but want to stand out from the crowd.